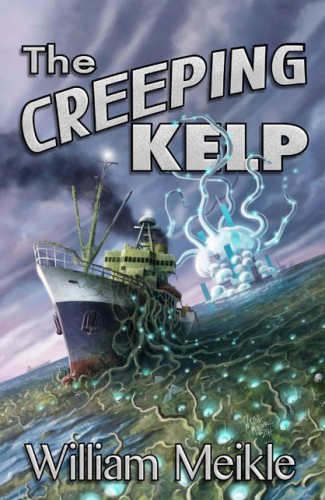 Some seaweed, a jellyfish and some material brought back from the Peabodie expedition to Antarctica. An innoccuous enough blend you might think. But when a storm in the North Atlantic frees a sample that has been dormant inside an old wreck, the new creature finds that it is hungry. Our plastics-oriented society has given it an abundant supply of food… more than enough for it to grow, and build, and spread.

Can anyone escape the terror that is… THE CREEPING KELP?

You can’t say that you are not a bit intrigued with a book titled “The Creeping Kelp”? I know when I received it from our good friends at Dark Regions Press I was. Just the title and cover art brought me back to those glorious Saturday afternoons of my childhood watching Creature Double Feature featuring films like “Them”, “The Deadly Mantis”, “Godzilla” ,”Food of the Gods” and a myriad other nature run amok movies. Whether it was one of man’s many follies that created these monsters or not you knew that there was going to be death and destruction, and what young boy doesn’t like that.

Reading “The Creeping Kelp” did not disappoint. It is a fast paced, character driven modern take on my beloved nature run amok story. Mr. Meikle breathes new life into this storyline with action galore, a seemingly unbeatable threat to mankind with mayhem, death and destruction aplenty.

What I truly enjoyed about “The Creeping Kelp” was that it was a hell of a lot of fun to read.

So if you are like me and grew up on those glorious nature run amok movies you will absolutely love “The Creeping Kelp” and I highly recommend it.