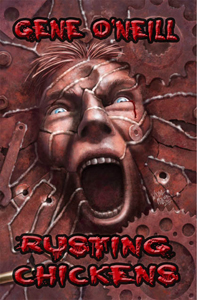 Rob McKenna knew all about pain and suffering. As a member of a top secret black ops mission deep inside Pakistan, his Marine Force Recon Unit had a close up and personal tour of Hell on Earth and the horrors that men are capable of doing to one another. When he returned back stateside to Napa, California, Rob was a shadow of his former self, a broken young man left clinging to the tattered fragments of his marriage, his memory, and the rapid decline of his physical and mental health.

Coming back from the war was supposed to be the end of Rob’s misery, the start of his new life, but unfortunately Hell had followed him home and the horror and pain had only just begun. Waiting for him where he least expected.

I always get terribly excited at the release of a new Gene O’neill book.  When I received a package in the mail from my good friends at Dark Region Press the other day and saw that it contained Mr. O’neill’s latest novella “Rusting Chickens I immediately put all my other books aside and started reading this one.

I was not disappointed. “Rusting Chickens” is spectacular.

It is a tale of a man shattered from the effects of a secret military mission gone bad and how he deals with life after that world altering moment, his mental and physical health rapidly deteriorating.

Mr. O’neill pulls you into the story immediately, grabs you by the throat and refuses to let go until you turn the last page.

You will experience the horror of war and the horror of a mind shattered by it. “Rusting Chickens” can and should be read in one sitting, actually once you start I don’t think you will be able to put it down until you are finished, it is that good.

It will leave you short of breath and visibly shaken, with a twist at the end that I did not see coming and made the book all that more enjoyable.

Do yourself a favor and use the links above to visit Dark Regions Press and order the latest masterpiece by one of the great authors of our generation.

I give it my highest recommendation.