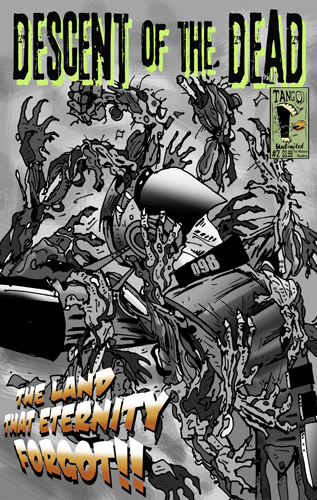 “Picking up from where the first issue left off the town of Roanoke has lost communications with HQ and the tech repair teams who have went to investigate have gone missing. The call goes out to Tango Company to investigate. Tango company a specialized zombie elimination squad consisting of entirely of a team which have all survived “the bite”; At the time are participating in a slice and dice eradication process called “Operation Twilight.” Operation Twilight consists of all the remaining elimination squads that have gathered from across the globe in hopes to eliminate one the last of the known zombies hordes off the planet. In order for the teams to accomplish their mission the squads must first extract a large radiated meteor. The meteor represents the source of the dead’s re-animation and their unnatural longevity. Once the meteor is removed it can do away with the threat of the undead permanently but it won’t come easy.“

Artwork: 4.0 out of 5
Now this is a book that my eyes like to look at! The designs, being futuristic, are all awesome and I want to see more and more of this world. The zombies are GORE-Geous, but to me the highlight is the look on the military guys. Each one has a different weapon and the just happen to be all around bad ass. Some of the panels though have a little too much going on, and the cover also falls into that category. It’s not distracting and doesn’t take away from anything else, but it does stand out enough. The visual action is almost always present and it works from start to finish.

Story: 4.5 out of 5
The winner in the story department is the dialogue. The way the characters speak is very believable and in my opinion so spot on. Every word in a talk bubble works and it moves the story along so well. The action scenes move at a perfect pace, and the whole issue has an on the edge kind of feel. While issue #1 brought you into this world, it is not until you get into issue #2 that you get a real feel for the main cast.

Dying Breath: 4.5 out of 5
This issue was great. The artwork is so unique and works so well with the story. It does have a few down points, but the overall way it works out is great. The story took me further into this world and I have to say now there is no turning back. There is so much to look forward to with the future issues of this book, they just need to come out more than once a year. I need them now guys!

If you would like to buy or know more about Descent of the Dead #2 you can find it at www.tangounlimitedllc.com/

Descent of the Dead – Issue 2

Tags Descent of the Dead