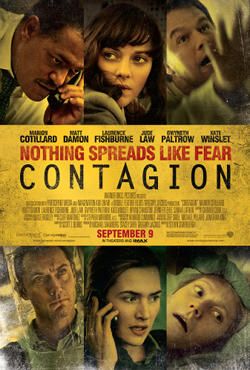 Friday brings the opening of the blockbuster virus gone wild film CONTAGION. Sporting an all star cast and a spooky storyline this one could be the first major hit of the fall season.

To celebrate the opening we have got an unbelievable prize pack for one lucky reader All the details are below and make sure to click on the email link at the bottom to throw your hat in the ring to take all this cool stuff home. The winner will receive:

Now that’s what I call a prize pack!

CLICK HERE right now and shoot me your name and complete mailing info. I will choose the lucky winner on Tuesday Sept. 13th. The winner will be notified by email.

An international traveler reaches into the snack bowl at an airport bar before passing her credit card to a waiter. A business meeting begins with a round of handshakes. A man coughs on a crowded bus.

One contact. One instant. And a lethal virus is transmitted.

When Beth Emhoff (Gwyneth Paltrow) returns to Minneapolis from business in Hong Kong, what she thought was jet lag takes a virulent turn. Two days later, sheâ€™s dead in the ER and the doctors tell her shocked and grieving husband (Matt Damon) they have no idea why.

Soon, others exhibit the same mysterious symptoms: hacking coughs and fever, followed by seizure, brain hemorrhage and ultimately, death. In Minneapolis, Chicago, London, Paris, Tokyo and Hong Kong, the numbers quickly multiply: one case becomes four, then sixteen, then hundreds, thousands, as the contagion sweeps across all borders, fueled by the countless human interactions that make up the course of an average day.

At the U.S. Centers for Disease Control and Prevention, researchers mobilize to break the code of a unique biological pathogen as it continues to mutate. Deputy Director Cheever (Laurence Fishburne) tries to allay the growing panic despite his own personal concerns, and must send a brave young doctor (Kate Winslet) into harm’s way. At the same time, amid a rising tide of suspicion over a potential vaccine and who gets it first Dr. Leonora Orantes (Marion Cotillard) of the World Health Organization works through the network of connections that could lead back to the source of what they’re dealing with.

As the death toll escalates and people struggle to protect themselves and their loved ones in a society breaking down, one activist blogger (Jude Law) claims the public isn’t getting the truth about what’s really going on, and sets off an epidemic of paranoia and fear as infectious as the virus itself.

A Warner Bros. Pictures presentation, in association with Participant Media and Imagenation Abu Dhabi, a Double Feature Films/Gregory Jacobs Production, Contagion will be distributed by Warner Bros. Pictures, a Warner Bros. Entertainment company. Concurrently with its nationwide theatrical distribution, the film will be released in select IMAX theatres worldwide.

Contagion is rated PG-13 for disturbing content and some language.

So, again if you want to claim all this cool stuff for yourself just drop me an email RIGHT HERE and include your mailing info. I will take entries through Monday Sept. 12th. The winner will be notified via email on Tuesday Sept. 13th.

For more info on the film check out it’s OFFICIAL SITE or better yet hit up their FACEBOOK page or live on the edge and go check out both.