Joey Danikan: you are amazing. Thank you for this idea. I owe you one.

1. Pogo stick—Leprechaun (1993)
“Try as they will, and try as they might, who steals me gold won’t live through the night.”
So says the leprechaun at the heart of this franchise. Let’s just forget about the sequels, which turned to drivel by the time Back 2 tha Hood came around. The first film was pretty good though. And I could go on and on about the philosophical ramifications of an evil leprechaun, make some Lucky Charms jokes, or talk about the potato famine, but I won’t. Instead, I’ll mention that seeing someone get murdered by an evil leprechaun on a pogo stick is fantastic. Also, Bluewater Productions is releasing a series of comics based on the franchise. 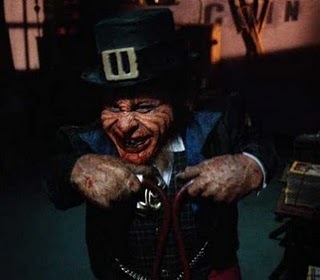 2. Crystal Unicorn Statue—Black Christmas (1974)
There are many things to love about the original Black Christmas, though the remake was absolutely terrible, as most remakes usually are. The thing I love most about this film is that the ways its killer dispatches his victims are all unique. Take, for example, one of the most gruesome yet non-graphic deaths: suffocation by cellophane. Or, better yet, death by stabbing with a crystal unicorn statue. Freddy or Jason could never be that creative. 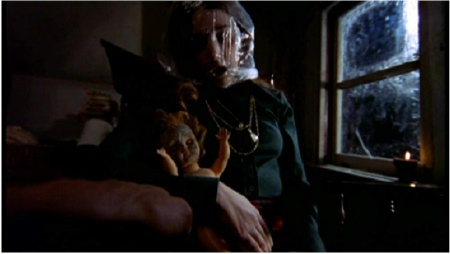 3. Pizza Cutter—Into the Mirror (2003)
This Korean film is the inspiration for the bore-fest Mirrors starring Keifer Sutherland. And, truth be told, this film is not that great either. But, in one of its first scenes, a main character’s reflection cuts her throat with a pizza cutter. Usually people go the butcher knife route when kitchen items are used as weapons, so A+ for originality, even if the scares are either dull or nearly non-existent.

4. Basketball—Deadly Friend (1986)
How does someone get killed by a basketball, you ask? It’s simple: a super-strong robot throws it at your head and knocks it clean off. Yeah. Totally awesome. 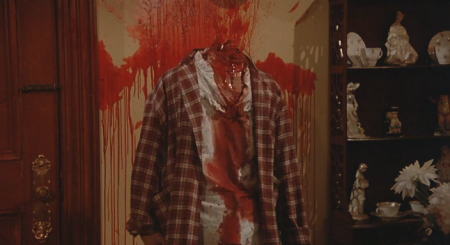 5. Lawnmower—Dead Alive (a.k.a. Braindead, 1992)
Peter Jackson is one amazing director. We all know this. And it’s a sure thing that, Lord of the Rings and King Kong aside, Dead Alive is one of his best. And the best part of Dead Alive? It’s not the plot, in which a guy’s mother is bitten by a Sumatran rat-monkey. No, it’s not that, or that she gets sick and dies and then comes back to life, killing and eating dogs, nurses, friends, and neighbors. Nope. The best part is that there is a downright zombie massacre and some of the undead fiends are killed by a lawnmower. That is awesome. Well, that and “I kick ass for the Lord!” 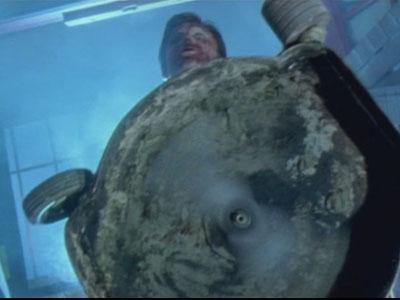 6. License Plate—Final Destination (2000)
License plates are scary for two reasons: they are (allegedly) made by convicts, and they can decapitate you. Ragged metal edges are like razor blades, only dirtier, because cars are disgusting machines.

7. Paper Shoved down Throat—The Cook the Thief His Wife and Her Lover (1989)
Suffocating is a common enough way to die. Dying because your airway is blocked by sheets of loose-leaf is uncommon and decidedly nasty. While this movie stars the amazing Tim Roth and Helen Mirren, it is actually not that horrific. It’s a lavish romantic drama and exceedingly violent, as evidenced by such killings as death by paper and cannibalism.

8. Vacuum—Dead Meat (2004)
Did you know you can defend yourself from a zombie attack by using a vacuum cleaner? You can! If you’re forced into up-close and personal combat, stick a vacuum hose to the flesh eaters’ eye and you can suck his brains out in a matter of seconds, then use it to clean your house after.

9. Staircase/Armoire—High Tension (2003)
Forget the plot twists, holes, and downright ridiculous moments, because we can all agree that High Tension (aka Haute Tension or Switchblade Romance), directed by the ever-so-talented Alexandre Aja, is full of more gore than the aftermath of a lawnmower attack on a throng of zombies (see Dead Alive). The special effects in this film are truly remarkable, as evidenced by the sheer amount of hemoglobin left in the wake of its nonstop violence. For my money, the goriest scene is the slaughter of Alex’s family by the unnamed killer. He uses a razor to dispatch of the mother and brother; after the killer slits her father’s throat he sticks his head through the bars of a staircase and pushes an enormous armoire alongside the railing, decapitating him. There are few murders by furniture in the annals of horror film.

10. Cotton Candy Gun—Killer Klowns from Outer Space (1988)
This one speaks for itself. 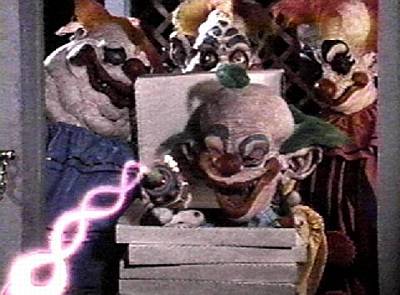 11. Piano—Zombieland (2009)
As with the furniture used as weaponry in High Tension, this common household musical instrument is used to dispatch one of the undead in the magnificent Zombieland. Of course, I’m talking about the “Kill of the Week,” executed by a nun outside her church. Awesome. That old lady didn’t need any rules to survive.

12. Power-Drill Guitar—Slumber Party Massacre 2 (1987)
In keeping with musical instruments, there are few weird weapons that are as strange as the power-drill guitar used by the killer in Slumber Party Massacre 2. When the members of an all-female rock band get together, dreams are bound to bleed into reality, resulting in a loss of sex and an increase in bloody violence.

13. Umbrella—Silent Night, Deadly Night 2 (1984)
Another common household item used to its full potential! The brother of a child who witnessed the murder of his parents by a spree killer in a Santa Claus suit turns into a psychopath. Who would have guessed that would happen? It should then come as no surprise that said psychopath, when made angry, would impale someone on an umbrella and then open it, just for fun. 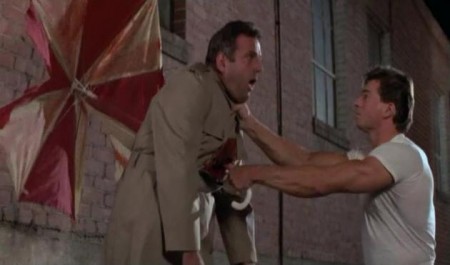