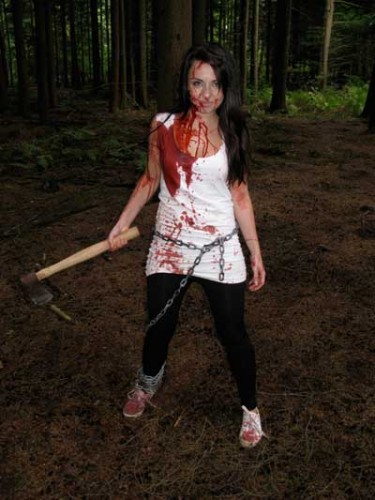 Presenting new stills and promo clips from the production of Young, High and Dead

As we are told, “Young, High and Dead” is the brainchild of Luke Brady. Half autobiographical, half fantasy, the film is based on the relationships between of many of his close friends and fused together with a ‘what if?’ horror story.

Check out gallery of stills below

SYNOPSIS:
To celebrate their recent engagement, Dan and Katy take their friends, John, Jenny and Gary, on a weekend camping trip to a forest. Unbeknown to the group they pitch up camp right next to where a man is about to bury a local missing child. The man watches closely by and it’s not long before their drink and drug fuelled night descends into chaos. With the girls now asleep the three guys argue when Dan discovers some kids clothing hanging in a nearby bush. Jon makes a stand that “it’s too dark to pack up” and that “no-one even knows which way the cars are”. Dan reluctantly goes along with the fatal decision to wait until the morning.

The group awake in the early hours to find themselves shackled and chained to tree’s and the children’s clothes missing. With their every move being watched by a psychotic killer, the group now more then ever need to work as a team. But it’s not long before things begin to fall apart as jealousy and betrayal rip through their tender alliances. As they enter a deadly game of cat and mouse, bad judgement and wrong decisions cause each relationship to split up both physically and emotionally. Are the group able to put their differences aside in order to exit the forest alive, or will the killer win and leave our group ‘Young, High and Dead’?

You can followup more at:
www.younghighanddead.com