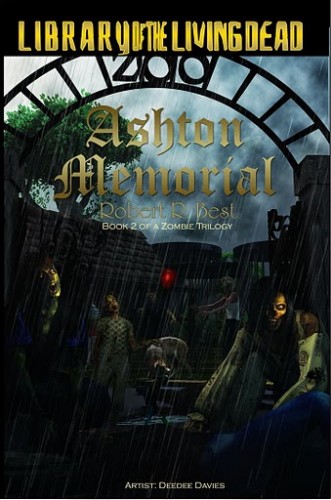 Have any of you heard that there might be some kind of glut in the zombie market? It’s like a plague has been released, infecting us all and overrunning the streets. As can be the problem in any flooded market, individuals damn well better have something to make them stand out if they are going to be worth dropping our hard earned money on: Max Brooks had scope, Mira Grant has emotional honesty and political intrigue and Brian Keene had a whole bucket full of pissed off pouring from every word. Unfortunately, the second part of Robert Best’s Memorial trilogy doesn’t offer much of a reason to place it above any of the many other choices a zombie aficionado has available.

We are in day two of the zombie apocalypse, following Angela Land and Parker Welch as Angie tries to find a place to keep her children safe and Park desperately tries to get back to his own. In addition to the living dead, they have to deal with the power mad dictator who has taken over the Ashton Memorial Zoo and kidnapped Park’s daughter. Also, for some reason, the animals have decided to attack any living person they see as well.

Certainly, I may be missing something, never having read the first book. Maybe that was where the depth of character was introduced and a sense of the emotional cores of the main characters was established. Perhaps something beyond the basic “I have to stay alive and keep my kids that way, too” motivation was present there. Maybe we got to know a bit about the villain so that he didn’t come across as a basic cartoon of a stereotype. That could be true and I could be missing out but I certainly did not see it in the book I read.

I’m not trying to say that ASHTON MEMORIAL is a particularly bad read. It moved smoothly, poured out the blood in buckets and kept the action rolling along well. It just felt bland and lacking in anything special. Unfortunately, there isn’t room on my shelf or in my bank account for what could have been described much easier as “another zombie book” complete with siege, desperate parents and a despotic attempted ruler. I’ve been here before, but the new car smell wore off years ago and I need more of a reason to care.

It can be purchased here.