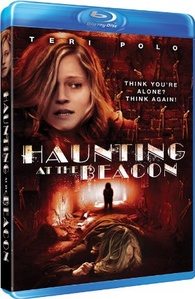 “Solid piece of entertainment…look for this and request it”

Teri Polo (Meet the Parents, The Hole) stars in the supernatural thriller HAUNTING AT THE BEACON, available on DVD September 13 nationwide at Walmart and other retailers for a SRP of $19.98. Winner of the Best Feature Film & Best Actress Awards at the Paranoia Film Festival (2009), the film also stars David Rees Snell (The Shield), Elaine Hendrix (the new 90210), and genre vet Michael Ironside.

Filmed at the haunted Rogers Hotel in Waxahachie, TX, the cast and crew experienced strange occurrences themselves. Writer/Director Michael Stokes (writer Bram Stokers Shadow Builder, The Marsh) told Fangoria.com of stories he heard of bedcovers being pulled back, items being moved, sightings of strange orbs and even the sounds of children laughing and crying every night around 3 a.m. The building’s elevator, which plays a prominent role in the movie, also had a habit of trapping hotel staff, usually after a big day of shooting. “We shot one scene in what is supposed to be the hotel’s most haunted location,” Stokes recalls. “There was no problem with the equipment, and our sound man checked the playback to confirm everything had recorded properly. Still, when the DAT tape reached the lab, it was blank. None of the dialogue had been captured. The actors had to dub the scene.”

While trying to get their lives back on track after the loss of their four-year-old son, Bryn (Teri Polo) and Paul Shaw (David Rees Snell) move to the charming old Beacon Apartments.

Bryn begins seeing a ghostly little boy skulking around the building and tries to uncover the details of the boy’s death. She hopes that freeing the child will allow him to carry a message to her son. Too late she realizes a second malevolent entity stalks the halls of the Beacon: one that doesn’t want the boy, or her, to escape.

Filmed at the haunted Rogers Hotel in Texas, The Haunting at the Beacon will make you wonder if you’re ever really alone.

HAUNTING AT THE BEACON

Rating: Not Rated (Special Features Not Rated/Subject to Change)

Tags Beacon Haunting at the Beacon