Jim grew up in some city in the Midwest where, at a young age, he was fortunate enough to discover speed metal, comic books, horror movies, and Frazetta. He drew a lot. After graduating college he moved to a much larger city in the Midwest where he worked as a bouncer for a number of years. He continued to draw a lot and began to paint a lot, too. After getting punched in the head one too many times, and choking his boss, he quit bouncing he began to get much sought after illustration work on properties such as Dungeons & Dragons, Magic: The Gathering, World of Warcraft, and Star Wars.

He has also written and illustrated several how-to books on fantasy and horror illustration entitled Hell Beasts, Wreaking Havoc, and the soon to be released How to Draw and Paint Vampires.  You can see more of Jim’s work at www.jimpavelec.com, genethoq.deviantart.com, and check out the progress on his newest project at hachihachimitsu.blogspot.com. 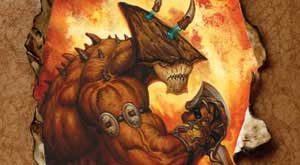