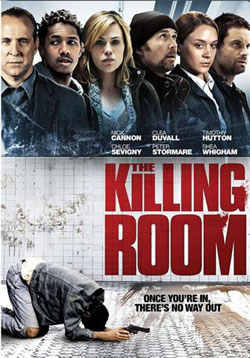 Four volunteers sign up for what initially appears to be a typical paid research study, only to discover that they’ve unwittingly become involved with a classified government program that was said to have been terminated nearly two decades ago, in this tense psychological thriller from director Jonathan Liebesman. The allure of a little extra cash proving too powerful to resist, four strangers decide to partake in a paid research study.

As the study gets underway, the group is presented with a series of questions, and given a finite window of time in which each individual member must submit a unique numerical answer. At first, the participants all assume that the subject who gives the most obviously incorrect answer will be removed from the experiment, though it doesn’t take long for the group to realize that the correct answer isn’t always the answer that the researchers are looking for. Meanwhile, as the brooding Dr. Phillips (Peter Stormare) attempts to manipulate the study to get the answers he wants, the newest member of his team, military psychologist Ms. Reilly (Chloe Sevigny) begins questioning the ethics of such a diabolical experiment. 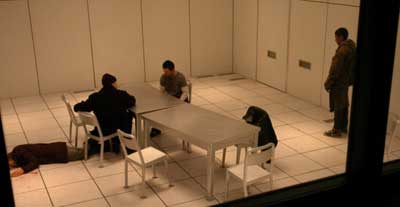 The subject of isolation, government experiments and human interaction seem to re-occur once or twice a year. Whether it’s more extreme like “SAW“, more sci fi like “Cube” or more subtle like “Breathing Room“, the fascination is there from the perspective of a viewing audience. Or maybe its more primitive…2 men enter, 1 man leaves.

The Killing Room, caters to our inner fears that an agency exists that uses common folks for there own governmental gain. Ms. Reilly (Chloe Sevigny) is brought in as an observer much like we as the viewing audience are. The purpose seems to be to conclude on the session what the objective is. This determination will also determine her acceptance into the team. Peter Stormare plays the rather cold and determined Dr. Philips who seems to be the master mind of this operation. The Killing Room refers to the 4 walled, sterile environment the 4 test subjects are placed in . Much of the thrill ride rests in the filmmakers ability to keep us on edge.

We as much as Reilly wants answers to what the motivation behind all this is. Decoyed with a rather easy method in getting test subjects to volunteer with the promise of a decent pay off for the day brings in 4 subjects who are asked to fill out a questionnaire. When Dr. Philips enters the room staged as their esteemed host for the day, they quickly grow into panic when he shoots one of the volunteers point blank in the head. The rest is sheer terror as the remaining 3 are subjected to games and questions and answer sessions which will leave 1 of them exterminated as a result.

I would have better enabled my opinions if there was a subtitle included, as a few of the scenes were spoken a bit low to get all the facts. My guess is some of the reasoning was disclosed but lost because of this fact. The actors do a pretty good job at feeding off of each others tension. Though we already know the outcome is not going to be good. 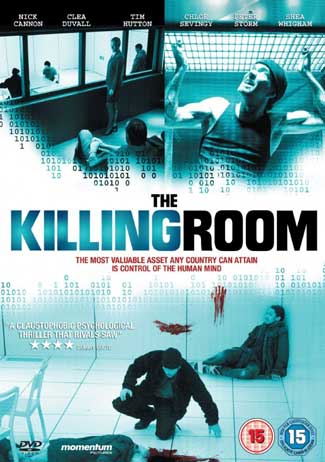 The films stars Nick Cannon as Paul Brodie, Clea DuVall as Kerry Isalano, Timothy Hutton as Crawford Haines, and Shea Whigham as Tony Mazzolla. We are introduced to the film per title cards which tell of a defunct operation that was integrated to test subject for mind games called the MK operation. As it progresses, we learn that this operation which is seemingly above the law and immune from the rules that they can test as they wish for the whole of the country. In other words …….a patriot act. Things heat up as the tension of the individuals increase. We expected this much anyway’s, just not the outcomes. Jonathan Liebesman directs this piece which at times becomes a little confusing. 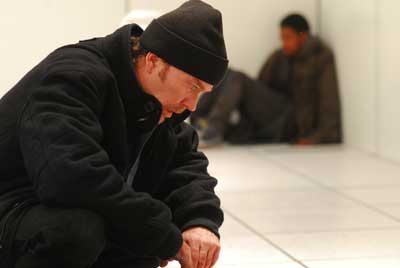 We get all the answers but some who I felt like maybe I need to revisit this film again in the future to catch what I missed. The strength of the film comes in the acting performances and struggle for survival. While the film is much closer to a thriller it still has a subtle and at the same time in your face horror show aspect that delivers. Peter Stormare is perfect for the role as just a creepy fellow who has been doing his job for far too long. Echo’s of the film “Cube” begin to seep in but not enough to be a totally derivative experience. 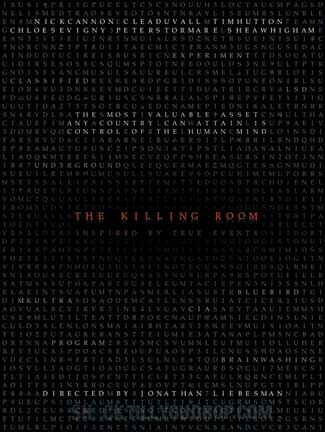 Though as mentioned before this is the 3rd or 4th film I’ve seen in the last 2 years that uses a similar premise. “House of 9” and “Aquarium” are a couple more titles that work in this vein. I stayed pretty glued to most of the film, and its somewhat of a trick ending gets you to thinking long after . The Killing Room  is a decent outing that will entertain most viewers.