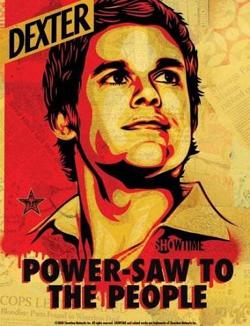 Can you believe that we are five seasons deep into the life of DEXTER but we are and season five will be heading home in a few short weeks on both DVD and Blu-ray. Got the press release today that outlines it all.

The riveting exploits of everyone’s favorite serial killer continue when DEXTER: THE COMPLETE FIFTH SEASON arrives on DVD and Blu-ray August 16 from Showtime Networks, CBS Home Entertainment and Paramount Home Entertainment. Starring Golden GlobeÂ® winner Michael C. Hall, the fifth season finds Dexter going from happily married husband to guilt-ridden single dad as he struggles to atone for the death of his wife, Rita. But when his dark secret is discovered by a woman seeking revenge against those who brutalized her, he finds a kindred spirit who may finally save or destroy him. Julie Stiles joins the cast for the enthralling fifth season, which also features appearances by Peter Weller, Jonny Lee Miller, Shawn Hatosy, Maria Doyle Kennedy, Katherine Moennig and Scott Grimes.

The DEXTER: THE COMPLETE FIFTH SEASON DVD and Blu-ray sets include all 12 engrossing episodes, plus access to behind-the-scenes interviews with cast members Michael C. Hall, Jennifer Carpenter, C.S. Lee, Lauren Velez, Desmond Harrington,James Remar and David Zayas, executive producer Chip Johannessen and special guest star Julia Stiles, who reflects on her time with the show. The four-disc DVD set will be available for the suggested retail price of $49.99 US and $54.99 CAN and the three-disc Blu-ray set will have a suggested retail price of $67.99 US and $74.99 CAN.

The DEXTER: THE COMPLETE FIFTH SEASON DVD is presented in Widescreen with Dolby Digital English 5.1 Surround, English 2.0 Surround, French 2.0 Stereo and Spanish Mono. The Blu-ray is presented in 1080p high definition and features English 5.1 Dolby TrueHD (24-bit/96 kHz), which was developed for high-definition entertainment to deliver a powerful sound that is bit-for-bit identical to the original studio master, as well as French 5.1 and Spanish 2.0 Stereo Surround. The DVD and Blu-ray are not rated in the U.S. and rated 14A in Canada. Total running time is approximately 10 hours, 18 minutes. Episodes and special features are as follows:
Episodes:
My Bad
Hello Bandit
Practically Perfect
Beauty and the Beast
First Blood
Everything is Illumenated
Circle Us
Take It!
Teenage Wasteland
In the Beginning
Hop a Freighter
The Big One