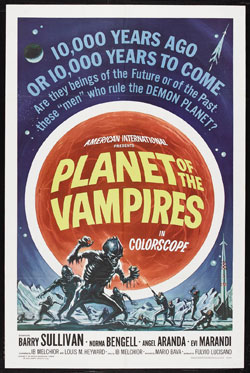 Planet of the Vampires is a 1965 Italian science fiction/horror film directed by Mario Bava. The film stars Barry Sullivan and Norma Bengell. The screenplay, by Bava, Alberto Bevilacqua, Callisto Cosulich, Antonio Roman, and Rafael J. Salvia, was based on an Italian language science fiction short story, Renato Pestriniero’s “One Night of 21 Hours”. The story follows the horrific experiences of the crew members of two giant spaceships that have crash landed on a forbidding, unexplored planet. The disembodied inhabitants of the world possess the bodies of the crew who died during the crash, and use the animated corpses to stalk and kill the remaining survivors.

The first thing to be made clear about Mario Bava’s Planet of the Vampires is that the movie would more aptly be titled “The Planet of the Strange Beams of Light That Exist on a Different Vibratory Frequency and Possess Dead Bodies.” Mario Bava is the forefather of Italian Horror Cinema, but that does not make all of his movies flawless, especially this film from1965. This movie is filled with the same type of camp that Trekkies find so endearing about the original Star Trek series. The movie is really a muddled mess of a story, but has some redeeming visual moments that prove what a genius Mario Bava can be even with a lackluster script, more than a dozen actors apparently speaking at least four different languages (with dubbing), and a small budget.

Probably the first thing that strikes your eye when you see this film is the incredibly campy leather uniforms worn by the spaceship’s crew. They look like X-Men movie uniforms with popped collars. The production values are obviously weak, but there is a subtlety to the constructed set of the spacecraft and the terrain of the planets that allows one to forgive the obvious budget restraints. According to the Wikipedia article about Bava’s film, the director Bava actually said “Do you know what that unknown planet was made of? A couple of plastic rocks – yes, two: one and one!” (en.wikipedia.org/wiki/Planet_of_the_Vampires) The planet’s terrain is permeated with smoke to disguise the obviously cheap looking sets, and even with Bava’s amazing uses of miniatures and forced perspective the film falls short, although I do think the larger rifle sized ray guns are visually a lot more striking than Star Trek’s phasers.

Just as on the Ridley Scott’s vastly more famous Alien, the crews of the spaceships Argos and Galliot are responding to a distress call on a previously unknown planet. Upon mysteriously landing on this new planet the Argos crew start to violently attack each other for no reason. When the crew finally gets their emotions straightened out and trek out to explore the condition of the Galliot, they find a mass of dead bodies strewn about the ship all seemingly killed at each other’s hands, just as the crew of the Argos had somehow avoided doing. The movie slows down significantly at this point as the crew tries to piece together the various phenomena and strange settings of this new world. The audience then sees the recently buried crew members of the Galliot rise from their makeshift graves. After several scenes where the crew explores the planet, the two members of the Galliot are reunited with members of the Argos. These crew members attempt to sabotage the Argos by removing its meteor deflector. Captain Mark discovers the sabotage and in an ensuing scuffle rips open the returned crew member’s shirt to discover a chest of rotting flesh.

Finally we learn the identity of the strange light beings and their motives to cause the crew members to kill each other in order to inhabit their corpses. Just as in episodes of the original Star Trek, the premise of the movie starts out strong enough to draw the viewer into the strange new world inhabited by eerie beings, , but takes too long getting to the point about the mystery of the planet’s inhabitants. I feel that the writers and directors of this genre of sci-fi somehow believe they need to prolong the discovery and motives of the alien beings, but this often leads to the audience member losing interest. I am not the first to make comparisons to Ridley Scott’s Alien, but the camp factor and the bad dubbing leave it extremely short of Ridley Scott’s genius take on a b-movie premise, although the many out there who claim that this film was a direct influence on Alien certainly have a point.

There were some redeeming scenes that used clever sci-fi interpretations, for instance when Captain Mark and crew member Sanya discover the ancient ruins of a long forgotten race, with skeletal remains three times the size of humans and the door locks behind them they discover a tuning fork and deduce that the door must open with a certain vibratory pattern, but overall this film falls short. Unless you are a bit of a Trekkie I recommend Bava’s better known works Black Sabbath or Black Sunday.