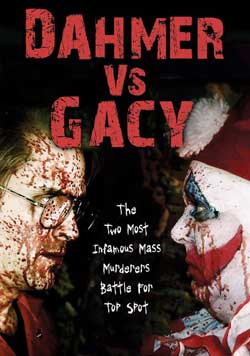 A secret government lab run by Dr. Hess (Art LaFleur) has been trying to create the ultimate killer using the DNA of infamous killers Jeffrey Dahmer (Ford Austin) and John Wayne Gacy (Randal Malone), but there’s one big problem: they’ve escaped! Bloody mayhem stretches across the United States as they go on the ultimate killing spree. Trying to stop the maniacal madness is Ringo (Ford Austin), a hick warrior being trained by God (Harland Williams), using only a shotgun and a bottle of whiskey. In his road trip to hell, he must first fight off his own demons, not to mention an army of Japanese ninjas and a Super-serial killer (Ethan Phillips)! It all leads up to the ultimate showdown!

In the annals of film there have been some epic battles. King Kong vs. Godzilla, Godzilla vs. you name it, Alien vs. Predator, Freddy vs. Jason and of course the list goes on and on. Actually, there is a funny scene in the movie where two characters discuss this very thing. And they ponder what would happen if someone were to make a movie about the crazy experiments of one Dr. Stravinski, a scientist hell-bent on using the DNA of serial killers to create the ultimate killing machine. They even go as far to mention that the title would probably be something lame like Dahmer vs. Gacy. Prophetic? Yes. But when you have the guts to make fun of your own movie and the silly and bad quality of it all, how fair is it to then review it saying how silly and bad it all is? Ah, the quandary. But don’t fool yourself. This movie just isn’t that good. Sure you have some funny moments and some in-jokes to boot. If only that were enough to save the rest of it.

And whose brilliant idea is it to clone the most violent and famous serial killers of all time? Why, the government of course. But Project X-13 is so secret that not even the President of the United States knows about it. The thinking goes that you need an edge in modern warfare and what better way to obtain that than to introduce a super killer, one so devoid of not only rational thought but of any feeling of good and decency. You could darn near make an invincible army. At least that is the hope of one Dr. Stravinksi, the mad scientist behind this brilliant plan.

Too bad an accident happens at the lab that unleashes two of the clones, one Jeffrey Dahmer and of course John Wayne Gacy. The two waste absolutely no time in terrorizing the city, hacking, slicing and (in Dahmer’s case) eating their way through innocent people. Who alive could possibly stop all of the carnage? Just a redneck named Ringo who is commanded by God to do that very task. Throw in some ninjas to boot and you end up with a whole lot of crazy.

Dahmer vs. Gacy is a low budget movie that doesn’t even manage to rise above the so bad it’s good category of horror films. The premise certainly is laughable and to some even done in bad taste as they feel it glorifies the two very real monsters. I can understand that because if someone I knew had fallen victim to Dahmer or Gacy I wouldn’t be exactly thrilled about this movie either. Sure, both are lampooned about their respective tendencies and mistakes that got them caught but that don’t make it any better or for that matter, right.

The blood and gore, while plenty, is just a little too fake. The acting is really not that bad as everything is presented in a comical, over the top dramatic way. For this film it actually works. Bonnie Aarons has fun as General Arbogast and even gets to do her best Steve Martin-esque imitation from Planes, Trains and Automobiles. One running gag has the local news covering some of the aftermath and interviews with the common folk. They even throw in some serial killer groupies complete with their “I love serial killers” tee shirts.

All in all, Dahmer vs. Gacy just doesn’t have enough going to entertain one through an hour and a half. A few good scenes does not a feature film make. I can’t really even recommend renting this one as I’d feel bad you shelled out some money for it. If you can catch it for free than maybe give it a go but I would have to definitely emphasize the word maybe. While some may find the proceedings crazy and funny, others will be racing to find the stop button on their remote. 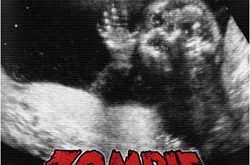 ‘Rat Scratch Fever’ – anyone? Trailer and a big fat rat