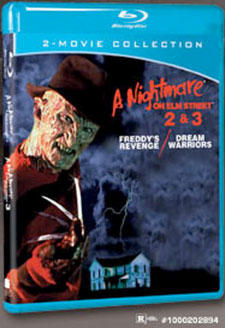 This falls horror releases are beginning to take shape and today’s announcement is a biggie for Freddy fans.

Here are the details:

The two films will be hitting together on one disc. It’s looking like they will be a bare bones release, no special features announced. Sept. 27th is the scheduled release date.

NIGHTMARE 2 originally hit theaters all the way back in 1985 and was highly anticipated at the time. Starring Robert Englund and Mark Patton it continued Freddy’s reign of terror:

A new family moves into the house on Elm Street, and before long, the kids are again having nightmares about deceased child murderer Freddy Krueger. This time, Freddy attempts to possess a teenage boy to cause havoc in the real world, and can only be overcome if the boy’s sweetheart can master her fear.

Personally, one of my least favorite in the franchise it is still a must own addition to any horror fans collection.

NIGHTMARE 3 was just the opposite, in my opinion one of if not THE best sequel in the franchise. Also starring Robert Englund and bringing back Heather Langenkamp as Nancy from the original, DREAM WARRIORS is a great film and definitely more on par with the ground breaking original.

Picking up where the original Nightmare left off, Nancy has grown up and become a psychiatrist specializing in dream therapy. She meets a group of children at a local hospital facing Freddy Krueger, the same demon she once encountered in her sleep. One of them is Kristen, who has the power to draw other people into her dreams. Working with a male doctor assigned to the case, Nancy helps the kids realize their special abilities within the nightmare world. When Freddy captures one of her charges, she leads a rescue attempt into Krueger’s domain, in hopes of putting his spirit to rest once and for all.

Circle the date on your calendar, you know you have to get it!