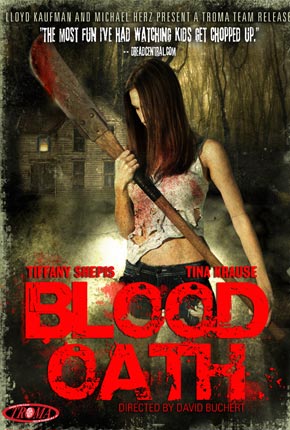 A group of friends on a weekend camping trip decide to investigate a local urban legend. The trip will change their lives as they are forced into a fight for survival against a horrific monster.

When I was a bit younger, I spent hours upon hours watching anything and everything that Troma released. If I could find it, then I would watch it. It encompassed most of the 80’s and early 90’s. These films had heart and were charming in their own demented way. Things change and so does filmmaking. Everything I loved about those films began to disappear and soon I became bored and uninterested in their output (with the exception of the films directed by Troma co-founder and creator of “The Toxic Avenger” Lloyd Kaufman). All of that changed when I saw the film “Blood Junkie”, a comedic throwback to the slashers from the 80’s. Now, after watching “Blood Oath”, I feel that the glory(?) days of Troma have been resurrected from our past. The silly ridiculous fun has returned with a vengeance, no matter how predictable the final product ends up being, it’s still an awful lot of fun.

When Beverly (Katie Vaughn) and Charlie (Roger Horn) grab their friends Lisa (Natalie Hart) and Kevin (Jamie Reynolds), they head into the woods thinking they are going to have a fun and sex filled weekend hanging with one another and getting drunk. Kevin begins telling one of his favorite scary stories, which is also an urban legend, of the Krupps, a couple who just can’t conceive a child. One strange night a woman appears on their doorstep, instructing them to take drops of their blood and put them in a vial that they must bury in their yard. They fall upon hard times but twins are born. When the woman returns, the Krupps are instructed to sacrifice one of the twins. Of course they refuse and things take a turn when they are out driving one evening and get into a horrible accident. The parents are killed and both children survive. One is thrown from the vehicle and avoids injury, she is adopted out. The other child is scarred after smashing into the dashboard and is raised by the mysterious woman in an old cabin deep in the woods. After hearing the story, the following day our group decides they are going to trek into the woods and look for this mysterious cabin. What they end up finding is much more terrifying than anything they could have imagined. 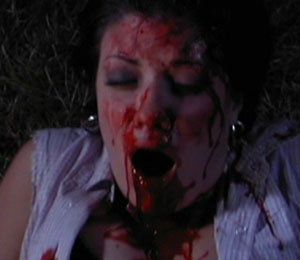 “Blood Oath” doesn’t cover any new ground. In fact it is completely ‘by the numbers’, it is just somehow a fun ride. All the rules and conventions of the 80’s slashers are followed. Unlike the previously mentioned “Blood Junkie” which is actually set in 1989, “Blood Oath” effectively captures the essence of what most of us enjoyed about them. We have some questionable acting, a healthy dose of red colored corn syrup, a predictable story (with a nice little twist near the end), and the most important ingredient…..boobs. Not too many, just enough to get by. The films’ opening scene even features my favorite modern day scream queen, Tiffany Shepis.

This isn’t the be all, end all homage to the 80’s slasher. This one, kind of fits in with the lower end ones. Something more along the lines of “Criminally Insane” rather than “Terror Train”. This is the type of film I could have pictured myself watching at four in the morning while drinking booze with a small group of friends with nothing better to do, still enjoying every minute of it. Director David Buchert obviously has a love for the genre and he does a great job bringing it back. I’m happy to see that Troma is taking strides in the right direction be reclaiming an arena that they had once ruled over in the 80’s. Breaking formula is terrific, except there is a niche for these films. They have disappeared for far too long and knowing, that of all companies, it is Troma that is responsible, then maybe there is still hope after all.