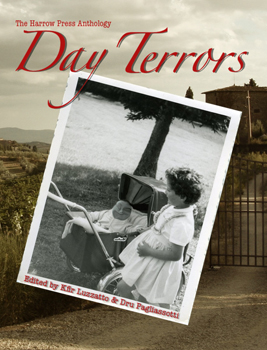 “I yanked her head back by her hair and sank my teeth in her neck, crunching through her esophagus, and again, and again, chewing, swallowing, her blood washing hot over my face, my neck, feeling her spasm and die, sacrificed to the new race she had created.

I dropped her corpse, a gravestone over what humanity had been.

I raised my bloody fists to the sky, to the future, and roared.”

I find myself in a bit of a predicament here. Day Terrors is the first anthology I have been asked to review that I submitted to and was rejected by. Any writer will tell you that rejection happens all the time, but haters still gonna hate and DAMN do I want to hate on this one. The question is: is the material inside really deserving of the hate?

There is a tendency towards over self-indulgent and self-conscious prose on display, something that occasionally ruins what should be a damn good story. A prime example of this is “The Woman in the Ditch”, by Scott Lininger, a story about the ugliness of racism culminating in blood and murder via sloth that should pack a hell of a punch. Unfortunately, the writing itself, told in first person from what we are to believe is a deep south redneck, hits the ear like someone trying to replicate the accent instead actually doing so (dropped g’s alone do not a redneck make) and it makes the story damn near impossible to read. There is also “A Day at the Beach”, which is, at its heart, very touching with the horror hitting in just the right spot, but is practically murdered by language and construction that feels stilted and stunted by attempts to sound erudite while coming across unnatural. I’ll save you the terror of “Atraxia”’s first line, whose mere construction made me want to chuck the book against a wall.

And there is quite a bit of first person narration, which we all know is a giant no-no.

But then comes John Jasper Owens’ “And the Crowd Goes Wild” making the end of the world via star worship incredibly person and absolutely terrifying. Damn thing kicked my ass. And “In Lieu of Flowers”, where Chad McKee uses our knowledge of what is coming to slowly and steadily ratchet up the tension on this well built tale of murder and revenge. And Gregory Miller, who, in “Miss Riley’s Lot”, effortlessly pulls off exactly what “The Woman in the Ditch” was straining so hard for. And Harper Hull’s ode to the traditional monster tale passed down among family, “Daddy Long Legs” that also deals with familial loss in a way that grabbed me by the balls. And Aaron Polson swinging in with one of the few real monster tale, “Sea of Green, Sea of Gold” and does what M. Night Shaymalan couldn’t: make a field of grass terrifying. Or the sober and heartbreaking way Lorna D. Keach approaches sacrifice in “Fiddleback.” Hell, do I need to tell you that Jason Sizemore knocked another one out with the Twilight Zone-ish ghost story “Lollipop.”

So the theme of the anthology is a little bland and too broad to do much for me (horror in the light of day isn’t exactly a new concept) and it is at times a tad too British for my tastes, but I have to bend my pride a bit and admit that there is some damn good stuff here. Certainly, if you like your horror to be more of the human variety then you’ll find plenty of joy here. 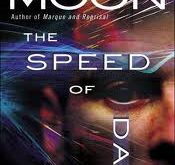 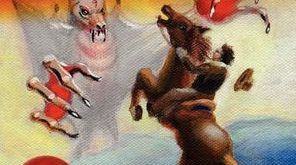 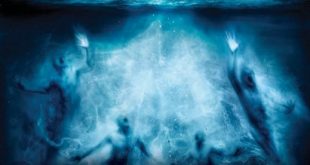 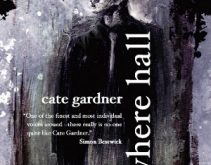 Book Review: We Have Always Lived in the Castle – Author Shirley Jackson