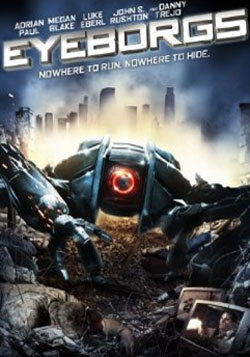 Are government surveillance cameras intended to keep us safe actually killing people? Is it a plot by the government to suppress the opposition, or have our terrorist enemies secretly gained control of our security system and are now using it against us? Following another major terrorist attack the US instigates an intense government surveillance program in which every camera in the country is linked into a single, all-seeing network called the ODIN system (for Optical Defense Intelligence Network).

The system includes millions of mobile, robotic surveillance cameras known as “Eyeborgs,” which watch everyone for suspicious behavior, all in the name of security, law enforcement and keeping America safe. An agent for the Department of Homeland Security grows suspicious of the system after a series of odd murders in which the physical evidence doesn’t match up to what the video records show. Now he must work outside the system to find out who is really controlling the Eyeborgs. With the help of a broadcast journalist and a purple haired Punk Rocker who turns out to be the President’s nephew, he must stop a plot to assassinate the President during the final debate of the election.

A new scif horror feature or maybe a harrowing look at things to come? These were the thoughts that ran thru my head as I sat thru this pretty bad ass production of a film. I confess that the name “eyeborgs” instantly filled my head with presumptions of cheap, cheesy and old school scifi, but this latest feature packs a pretty interesting punch.

As we are told, the future has bought on increased concern for security. The solution is the implementation of video surveillance camera robots that record everything and can interact when rules are broken. The unit is called O.D.I.N, which stands for Optical Defense Intelligence Network. These surveillance camera robots exist now pretty much everywhere recording everything, processing information, running it into computers and profiling everything on a 24-7 basis.

While this idea is scifi, I still see it as a potential foreshadowing of our direction as a society. Of course, the play is on convincing others that it’s needed for threats, terrorist attacks and criminals but at its core its control, power and information accumulation.

R. J. ‘Gunner’ Reynolds played by Adrian Paul is out main agent focus. He also has the notoriety as being referred to as the “father of eyeborgs” since it was “his” news testimony that helped convince the public that we NEED these things in our existence. He plays it pretty straight and narrow investigating reports and footage of crime events. Though with any strong technology comes some fear of government conspiracy. This is what fuels this film.

They play that aspect to the hilt as the Eyeborgs start to turn technology in their favor and begin to edit footage on there own. Now when I say they, it’s assumed that there is a terrorist power behind it, but that fact is confused a bit with the eyeborgs themselves performing sort of a A.I need. Still when the film ran its course, I wasn’t quite sure as to who the evil behind the camera might actually be if not for a few different elements. I won’t comment further than that as it might dig into the resolve at the end.

The premise centers around a potential assassination of the president, a leak in the secrecy chain, suspicion, and the nephew of the president who plays in a local rock band. As things heat up, its clear that a plan is in progress that threatens all including humanities freedom. The eyeborgs range from rat like cute to large Terminator style monsters. In fact I’m willing to bet some “transformers” might feel right at home in this universe. They all carry weaponry to a certain extent and are intent on recording and interacting with crime in progress. An anxious reporter Barbara Hawkins (Megan Blake) starts to take her intuition to another level as a conspiracy unfolds while reporting.

Are there flaws? yes, sure….in my mind it’s funny to think that robots will take the time to fight when they can just fire off a weapon. Though we have to suspend disbelief and throw out these noticeable traits to make for better cinematic experience. So while we question this aspect , just keep in mind that entertainment is the number one goal here for viewers.

“Eyeborgs” excels in CGI and 3D into real life footage. The interaction is clean, smooth and believable. Hats off to the team for making that portion of it really seamless. Director Richard Clabaugh takes on this monster project and on the most part does an excellent job with raising a human versus industrial sort of fear on screen. I was reminded of 2 films…”Demon Seed” and “Runaway” (Gene Simmons) that this production kind for borrowed a little bit of influence from. I’m sure there’s a few others, but you get the drift.

It’s definitely scifi at its best and the kill scenes that are at times pretty brutal add the needed horror element to the production. It doesn’t surprise me that this idea came to fruition, as even in real life conspiracy documentaries we are told about information collecting, video camera overload and possibly a man behind the monitor sort of way of thinking. This film takes that notion and just add the next phase of human interaction. Friend or foe, safety versus freedom …these are inevitable in progress that has technology taking on more functions of humanity. Slick thriller, wild robotics… thumbs upon all around. Silly at times, but fun.