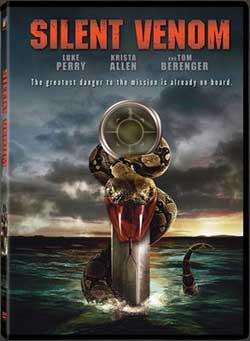 On a remote Pacific island, military tensions derail Dr. Andrea Swanson’s (Krista Allen) research on a mutant snake species. She takes refuge on Commander O’Neill’s (Luke Perry) Taiwan-bound submarine, unaware that her assistant has smuggled some of the snakes on board. When a Chinese torpedo rocks the sub, the serpents are unleashed to hunt the scientists and the crew. Tom Berenger co-stars in this depth-charged chiller.

Dr. Andrea Swanson and her shady assistant Jake are studying snakes on a remote island in the Pacific trying to discover a super anti-toxin for a top secret project for the US military. The plug is pulled on the project and the scientists are picked up by a crew taking a out- of -commission and unarmed sub to Taiwan. Jake the shady assistant sees an opportunity to make some cash and disobeys orders and bring all the highly venomous snakes aboard the sub. 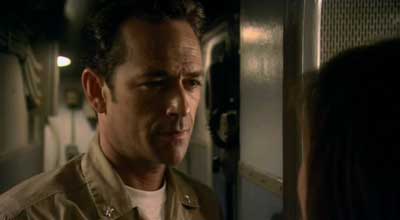 A curious sailor opens the cargo and out come the snakes including two large mutant Diamondbacks. To top this all off, the sub is forced to travel through Chinese naval maneuvers , and actually pursued by a Chinese sub. With a crew dying one by one and ” Running Silent ” from a hostile fleet will the mission be a success or will they all fall victims to Silent Venom?

While watching Silent Venom i just couldn’t stop thinking about how senseless a title this is. Snakes are able to move around totally unnoticed and silently. I know for a fact that their venom doesn’t make any noise , so where or better yet how did they come up with this name? Honestly, they should have went with the obvious and just named it ” Snakes on a sub”.

And then we have the cast. Luke Perry who plays the maverick Lieutenant Commander O’Neil who because he stood up for what he believed was best for his crew on an early mission is now forced into retirement but in order to retire and not be dishonorably discharged he is somewhat forced into taking this mission.His orders simple : Pilot the retired submarine to it’s finale port and don’t get into any trouble. The fact that Perry’s character is a 20 year veteran in the US Navy is kinda tough to swallow.He just doesn’t look old enough to play the character. Well it has been almost 20 years since he left 90210 and by the look on his face through the movie you can tell he is wondering how the hell he ended up here.Even Tom Berenger’s on screen presence does nothing for this film. 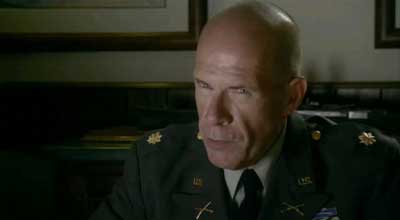 I did however like Krista Allen’s character Dr. Andrea Swanson but only because it was Krista Allen. As far as the special effects go , i can tell you that the two above average sized mutant Diamondbacks are probably some of the worst CGI i have seen to date. It reminded me of something out of a Playstation 2 game , very cartoon like. All the other snakes are obviously real but the movie labels them as being super aggressive and all they do is slowly slither around peoples feet..Either they were tired of all Perry’s 90210 stories or they were as bored shooting the film as i was watching it. 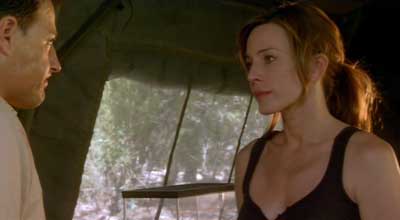 There is actually a scene where Dr. Swanson is covered by these so called super aggressive serpents and Perry’s character has no problem removing them off her one by one, they seemed more asleep then aggressive. Oh and why only show the Huge man eating momma snake for 30 seconds in the beginning and then never mentioned again ? Why was it left on the island and why do we get stuck with only the babies?

The script itself makes sense for the most part , but it just doesn’t stay very interesting , it really felt like i was watching one of those cheesy Sci Fi channel originals. The film is lacking any type of jump / scare scenes or a single moment of tension. I found it to be very predictable and actually a little boring but if your a fan of Krista Allen or you happen to be looking for a movie with a mix of The Hunt For Red October and Snakes On A Plane then this ones for you. 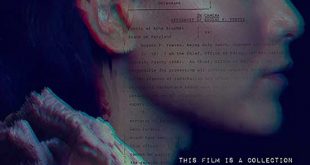