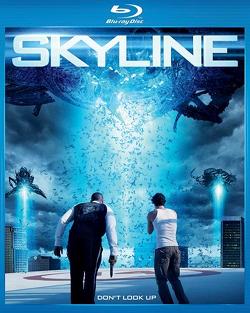 Strange lights descend on the city of Los Angeles, drawing people outside like moths to a flame where an extraterrestrial force threatens to swallow the entire human population off the face of the Earth.

The latest from the film makers THE BROTHERS STRAUSE is a special effects spectacular that ends up playing out like a low rent version of THE MATRIX and while that may sound a bit harsh SKYLINE ends up being yet another genre film that goes out of its way to point out the fact that no matter how much money you throw into cool FX and high tech coolness if the story sucks, so does the flick.

I wanted to really like SKYLINE and I guess on a couple of levels, I did but you just can’t help but notice the complete lack of any type of character structure and the fact that any attempt at story line solely exists to propel us into the next FX scene.

This film could be sub titled Oh Crap DUCK! because those in the flick spend 90 percent of it doing just that, hiding behind things, under things, in things, get the picture? Lots of hiding.

What little story line there is revolves around a group of friends getting together in a luxury apartment building for a weekend of Sex, drugs and Rock and Roll. All is going well as the beautiful people hang out, get drunk and get frisky. Nighttime comes, all pass out only to be awoke by some strange blue lights that fall from the sky.

From this point forward the FX take center stage as we are treated to a tour de force of really excellent Alien action. I particularly liked the scenes of the huge ships sucking up scores of folks like a giant vacuum cleaner. Very awesome looking stuff.

For the next 60 minutes we watch our survivors attempt to craft an escape plan only to be repeatedly turned back by the blue light aliens. Several impressive FX scenes but little else unfolds.

I’m not going to discuss then ending much other then to say that this is where, for me, it all fell apart. Also at this point that I started thinking about how Matrix – like the film had become.

Kind of a disappointing how it all ends up but that’s the way it goes sometimes.

Have to give THE BROTHERS STRAUSE a big high five for pushing the envelope with their digital effects work on this one. Some really inventive stuff going on. If they could have some how found a story in the mix it might have actually done a better job of stirring up interest.

Disc wise, this thing looks and sounds great but what BD disc doesn’t? So picture and audio is on track. Special features wise it’s a rather standard mix of commentary, deleted scenes and the like. No “making of” feature and that kind of surprised and disappointed me. Maybe something like that is in the BDLive section but for whatever reason I can never get it to work on Universal discs so, I can’t attest to what lies waiting for you in there.

All in all it kind of plays out rather dull and uninspired and when compared to other films in the selected genre namely ID4, WAR OF THE WORLDS and the just in theaters BATTLE: LA it ends up being just another face in the crowd.

SKYLINE hits a store near you on March 22nd. 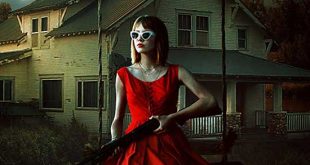