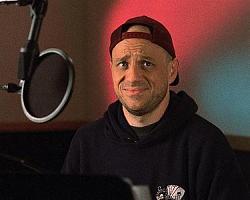 Does the name Bobcat Goldthwait mean anything to ya? Those of us that were fans of the Police Academy films remember him, he’s also the dude that lit a chair on fire on the Jay Leno TONIGHT SHOW once, getting himself banned from ever appearing again I might add.

He’s a comic who about a decade or so ago was a mover and shaker. Haven’t heard much from him lately but that’s because he’s gone behind the camera and done lots of TV and film work. And now it’s time for him to direct a horror film.

Word has come out today that Bobcat is prepping a slasher flick and that immediately gets my attention.
Here’s what is known:

It’s titled GOD BLESS AMERICA and it goes something like this:

Eventually people find out, and don’t really seem to mind. Goldthwait says, “and then a classmate asks him ‘did you kill Chloe?’ and he doesn’t say anything and she goes ‘awesome’. So then they get in this stolen Camaro and drive around and kill people.”

Well, talk about simplistic, but I love it. Nothing like a little mindless mayhem from the crazed mind of Bobcat to brighten your day.

This one is just in the “gearing up” stage so stay with me and I’ll keep you updated.