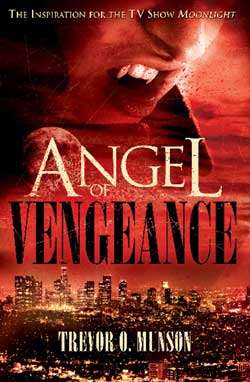 I don’t watch much TV. I have nothing in particular against it, but it doesn’t hold my interest the way a book does. This renders me unapologetically out of touch with most television series. So when I heard that Trever O. Munson’s Angel of Vengeance, which I was about to read and review, was the inspiration for the series Moonlight, I thought “Cool … but what’s Moonlight?”

Thus, blissfully free of preconceived notions, I cracked the book with not the faintest clue as to what I was getting into. Within the first few pages, I was intrigued. Mick Angel, a vampire private detective who is not all good guy, not all bad guy, but one hundred percent badass, promised to be an interesting protagonist at the very least. By page 50, Munson had me hooked. I can even tell you what line it was that did it. “Call me old-fashioned, but in my opinion the last thing the vampire world needs is a bunch of gender-confused losers who mistake being sullen and whiny for rebellious and interesting.”

Munson walks an interesting line in the way he presents Mick. He’s definitely no emotionally fragile, self-loathing creature, but neither is he an animalistic fiend who goes about ripping out throats indiscriminately. In fact, as we discover more about his life as a human, it becomes apparent that Mick’s morals are actually much less questionable in undeath than they were in life. I’m pretty anti-spoiler, so that’s all I’ll give you on the matter of his human past; if you want the particulars, you know where to find ‘em! (And might I just add that said particulars are juicy as a jugular?) As for his current code of ethics, though he does require human blood—which he ingests in a nontraditional manner that puts his personal stamp on the vampire stereotype—he selects his “donors” according to their own misdeeds. Mick refuses to prey on women, children, and innocents … but fortunately, his job puts him in the way of plenty of individuals who are, according to his self-imposed rules, fair game.

We know right away that the case with which Angel of Vengeance begins is going to lead Mick in directions both interesting and dangerous. As if his being an undead private detective weren’t enough, we are given the ultimate tip-off that trouble lies ahead: It all starts with a beautiful woman. A gorgeous burlesque dancer, to be exact, with hair a brilliant shade of red—which happens to be the only color vampires can see in Munson’s mythos. Reesa Van Cleef employs Mick to find her missing sister, and we just know things are going to get more complicated.

Now I don’t want to give away any plot points. This is, after all, still a detective novel, and there is a case to be unraveled. But the plot, while full of delicious twists and turns, isn’t even the highlight of the book. The most enjoyable element is Mick’s voice, which suits the private detective genre like a custom-fitted coffin. After all, what’s more noir than a vampire? Munson writes Mick with just the right tone; the vampire is self-aware enough that we feel his remorse for his mistakes, but not wracked with guilt to the point of irritating self-pity. He’s a narrator I’d be happy to hang out with again (read: sequel, please!).

I might even have to check out the DVDs of Moonlight.