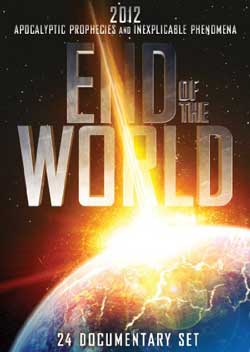 End of the World – 2012 Apocalyptic Prophecies and Inexplicable Phenomena

Browsing thru this huge collection, your gonna learn a thing or 2 about the 2012 legend. With so many books and programs dedicated to this prophesied historical date for massive change, the amount of information that has come forward is almost overwhelming. Let this set provide a proof of that with a collection of “end of the world” documentaries and related pieces. 37 hours is alot of time to invest for anyone, but you may want to start with a “pick and choose” approach till you are hungry for more.

Everyone should get up to speed on the Mayan portions so that you can make sense of the recent information that has come forth. Programs such as UFO’s invade, sightings and crop circles may not be “directly” connected to the 2012 circle, but they still are a part of the mysterious information and theories that often come into play. The set does a pretty good job of bringing together alot of prime interest pieces. The only complaint I’m guessing is that some are really dated. You might be expecting a multimedia A&E style extravaganza, though I’m guessing it would be too costly to include all those greatly done programs and offer them with this batch. Call this a source of all sources as if UFO’s are not your thing maybe Nostradamus is. Regardless there is much more to check out if that’s not your bag

Below I’ve included the Mill creek overview which will give you a sense of the pieces and content included. Every person who cares about the planet and the future should really give this set a look and get in the know. The year is 2011 which means whether you believe in it all or not, your gonna find out sooner than later.

Learn the truth behind the 2012 phenomenon that has exploded across popular literature, the internet, television, and now film. As the date itself has its base in an ancient calendar of the Mayan people of Central America, this comprehensive documentary collection explores the many theories, occurrences and questions across many of the puzzling topics including:

Were Nostradamus’s 2012 predictions correct? Did the ancient Mayans have knowledge that modern science has yet to prove? Is the Government conducting experiments and covering it up? Are UFO sightings on the rise? Why have crop circles never been explained?

These lingering questions get explored in great detail with in-depth interviews with the nation’s leading experts on inexplicable phenomena and apocalyptic prophecies.

PROGRAMS INCLUDE:
1. The Lost Ways of the Ancient World
2. The Mayan Prophecies Revealed
3. 2012: Is The End Near?
4. The End Times Prophecies
5. The Hidden Cross of Egypt
6. Ancient Mysteries: Life After Death
7. The Indigo Children of the UFO
8. Secret Order of the Knights Templar
9. The Freemason Conspiracy Unveiled
10. 9/11 and the New World Order
11. The Global Conspiracy 2010
12. True Abductions and Visitations
13. UFO’s Invade the US
14. Alien Encounters and Contactee’s
15. The Secret UFO Files
16. Black Operations: E.T.’s and Time Travel
17. The UK UFO Sightings
18. Ancient Aliens: The Origins of Mankind
19. Messages from Outer Space
20. The Crop Circles Revealed
21. The UFO Enigma
22. Alien Contact: Communicating with E.T.’s
23. UFO Crashes UK
24. Crop Circles, UFOs and the Paranormal