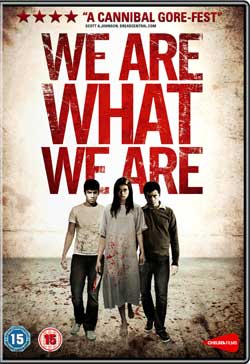 When the head of the family passes away, his wife & 3 children must assume his responsibilities. One of which is procuring meat for the family to eat. Unfortunately for the general populace, they are a family of cannibals, and they are very hungry.

So as The Black Saint was waiting to see “The Resident” at a screening last week (great movie by the way), he heard a lot of talk about this movie from Mexico called “Somos Lo Que Hay” or “We Are Who We Are”. All of the scuttlebutt amongst those who had seen it was very positive so I decided to give it a look see. Luckily for me it was available at home on demand so I doled out $6.95 to give it a shot. I love watching movies on demand in the mausoleum. It’s cheaper than seeing it in a theater & I have my own concession stand (kitchen) to rustle up whatever I feel like eating while watching in the comfort of my dusty old sarcophagus. So after I get back to the cool, dank serenity of my home, I fired up the old TV & promptly sat myself down for some good old people eating freaks (sounds like a good title for a movie, don’t it)? What I got was a pretty good movie about cannibals but without any actual cannibalism taking place, confused? Let me explain….

“We Are Who We Are” deals with a family of 5 (Dad, Mom & 3 teenagers) who live in Mexico. Dad is a watch repairman & has a booth in the local outdoor flea market in which he plies his trade. As the film opens, we see him coming out of a subway station. He is obviously very sick & looks demented as he staggers down the street pausing to look at some department store mannequins along the way. He points at them with wild eyes before he continues on his way. A few seconds later he collapses to the sidewalk, vomiting up a black, viscous bile before dying. In one of the film’s few humorous scenes, he is promptly scooped up by the buildings maintenance men & his emetic discharge is promptly mopped up before anyone can notice. The film then switches to his home where we find his oldest son, Alfredo daydreaming as he gazes out of a window in their modest home. Since his dad hasn’t returned home as of yet (they don’t know that he’s dead), he’s ordered by his mother to get his brother Julian and gather up the watches & timepieces his father builds & repairs for a living and go to the open air flea market where he conducts his business. While there, they are confronted by an angry customer & Julian promptly beats him to a pulp which gets them thrown out of the flea market (the fact that their father hadn’t paid the rent for his spot for 3 months didn’t help either).

When the boys return home they are confronted by their mother who reacts angrily to their news. It is at that point that their younger sister, Sabina, comes home to tell them that their father has been found dead in the street (we’re never told the cause of death). The family is of course, grief stricken but not for the reasons you would suspect. You see, dad was the bread winner in the home. He was the one who brought home the proverbial “bacon”. Only that in this case said “bacon” was human flesh! You see they are a family of cannibals, and now the must find new victims to feed on. Something they apparently never did while dad was around. There is conventional food in the house but not what they want to eat so the boys take it upon themselves to find….food. They first try to abduct a homeless child in broad daylight but they are fought off by a group of homeless children. Then they abduct a prostitute off of the street in view of her friends. The friends give chase but fail to catch the brothers & their prize (at this point I wondered why the other prostitutes didn’t just get their plate number & report them to the police. But I can get nit picky like that sometimes). 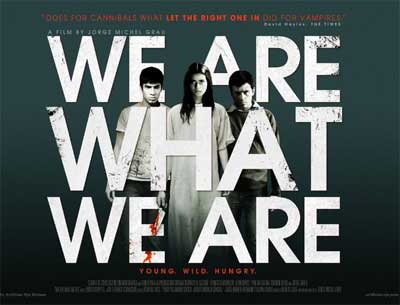 Meanwhile, during the father’s autopsy, an undigested human finger is recovered from out of his stomach & so the police get involved. The only detectives who will accept the case are as described by another cop “5th rate detectives” and they feel that this could be their big break. If they can solve this case, they would be feted by the president & make a lot of money with the ensuing promotion they would receive. Throughout all this, there is an underlying layer of humor. I can’t really put my finger on it but it almost seems like a Monty Python sketch gone horribly awry. At home, the mother is ranting and raving over the fact that they need food to complete “The Ritual”. What that ritual is (besides cannibalism) is never explained either, but it is of supreme importance to them. The mother is always complaining of their father wasting time “with whores” and takes a dim view of them. So you can understand her anger when the boys bring one home for dinner. They try to explain to her that “food is food, so what if she’s a whore”? But it falls on deaf ears & when the whore begins to plea for her life & the mother repeatedly brains her with a pole until she’s dead. Not only that, but she also brings the dead, mutilated body of the whore back to the corner where she worked & warns all of the others to stay away from her sons or they’ll end up the same way. In the interim, the daughter, Sabina, is always in the background. It seems that she’s trying to placate all involved but I saw her more as an agitator, constantly telling each member of the family something different to get on their good side while not immersing herself in the nasty goings on. 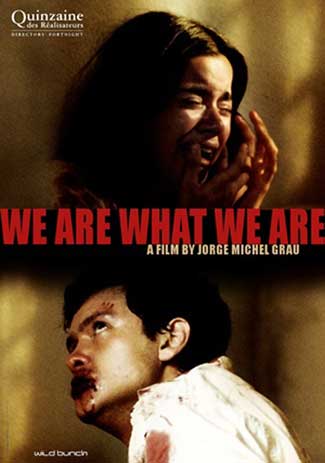 First time director Jorge Michel Grau has made something of a black soap opera here. In addition to the obvious problems the family has, there are elements of repressed sexuality, homosexuality, Incest, perversion & hypocrisy thrown into the mix. The wonderful thing is that it all mixes together very well. The film is a dour looking movie also. The sun doesn’t shine often & tones of grey infuse themselves into every scene. The house where the family lives seems to be a fairly large one but very drab & depressing as well. If they have a TV or radio, they never use them. The house is devoid of any noise whatsoever. It is as silent as a tomb. But all of this works to make the family that much more distant, to us & to each other. At times it seems all of them have secrets that they are keeping from each other but the audience knows all of their secrets as the film continues and that makes us anticipate the point in the film where everything is revealed to everyone so much more. And remember, the police are actively investigating the case as well. The family seems unfazed as to the sh*tstorm they’re bringing down on themselves. Apparently, father did know best when it came to keeping things undercover.

Of course, they are found out and when I reached that point in the film I was a bit disappointed because the ending was kind of telegraphed to me at that point. But that’s the curse of being someone who watches a lot of movies I suppose. It didn’t make me like the movie any less, I just hoped for something a little different this time. No matter though, the film is a winning combination of horror, comedy and soap opera done in the blackest way possible. I daresay that the combination of these elements should have overwhelmed a first time helmer but since Grau wrote the script as well he’s right at home here. 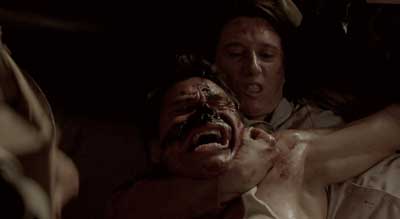 “We Are Who We Are” is also the first film that I’ve seen about cannibalism where no one is actually eaten. There is a lot of talk about the “ritual” & until very close to the end the family doesn’t even capture anyone besides the hooker & they don’t even eat her. There is some decent bloodshed in the last 20 minutes or so when they manage to capture two more victims & gut one of them in preparation for the “ritual”. But I can’t go any further than that acolytes. You’ll have to find out for yourselves. There are too many metaphors in the film for me to recount here but ultimately I believe the cannibalism is acting as a metaphor for the class struggle in Mexico. The haves vs. the have nots if you will, but that’s just my theory. You should see the movie for yourselves & decide what you really think the movie is about. And believe me you will come away thinking about the film when it’s done. You might even look at your family in a more introspective fashion. After all, all of us have skeletons in our collective closets. We just don’t have literal “skeletons” in them, do we? (actually I do, but that’s just my uncle sleazus, he needed a place to crash).

All in all, “We Are Who We Are” gets 4 shrouds from The Black Saint. It’s a gripping horror film surrounded by a thin layer of black comedy/drama. It is a film that you should see & it’s available right now On Demand so there are no excuses for ignoring it. And now dear acolytes & those of you who are waiting for your applications to be processed, I am spent! The Black Saint is always listening children, so continue with your prayers. You never know when I might pay you a visit… 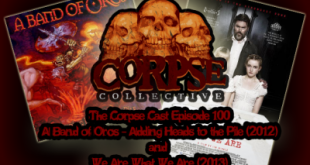