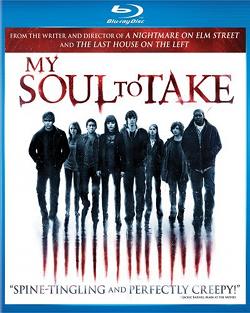 A serial killer returns to his hometown to stalk seven children who share the same birthday as the date he was allegedly put to rest.

For all its problems I have to admit, I really enjoyed MY SOUL TO TAKE. I know that’s not a popular stance to take but it is what it is. I found myself sucked into the storyline albeit muddled and confusing.

There will be spoilers ahead so stop now if you don’t want to know things.

To say that Wes Craven writes a complex story is the understatement of the year. MY SOUL TO TAKE is complex to a fault. He is also a master storyteller and that is apparent here as well. Although you will certainly find yourself scratching you head on more then one occasion as you watch MY SOUL TO TAKE you will not be able to stop watching while you scratch and there in lies the magic that is a Wes Craven flick.

The confusion begins right from the first frame as we met a man apparently having some kind of mental break and we are introduced to the Riverton Ripper although we really don’t know who or what that is. Fast forward 16 years and the 7 kids that were born on the night of the Rippers horrific acts are preparing to celebrate their birthday.

They are known as THE RIVERTON SEVEN and they seem to have some kind of self imposed prophecy that this 16th Birthday holds the key too.

One by one we meet the seven plus one more, a rather nasty little chick that goes by the name of FANG who seemingly runs the school where all these soon to be victims spend their days.

Seems that on that fateful night 16 years earlier the RIPPER, a man actually named Abel was killed after the opening killing spree but not before promising to return to avenge his death in 16 years and then promptly vanishing. Problem is they don’t know if he will come back as himself or will he come back as an alternate personality in one of the Riverton Seven. The Seven gather at midnight of “Ripper Day” to face the monster and one of the sevens more “interesting” members is chosen to battle THE RIPPER. His name is BUG and he holds more of a key then any know.

The RIPPER shows but it turns out to be nothing more than an elaborate puppet but this event sets things in motion for one hell of a day.

One by one, piece by piece the puzzle of THE RIVERTON RIPPER comes together and like I stated above at times it’s a head scratching, confusing and maybe just a bit silly but it’s all fun and that’s good enough for me.

There are all kinds of references to Condors and dreams and just when you think you know what’s going on Craven changes things up and goes a bunch of different ways. He holds one surprise till about the two-thirds point that I personally didn’t see coming, and I liked that.
This one is a bit of a mess, it really is but I find myself kind of drawn to it. I get what Craven was trying to do and he almost got there and he got close enough to make me recommend you pop this one in the player and give it a spin. Don’t listen to all the haters out there. This is Wes Craven, how bad can it be. His worst work is leaps and bounds better then three quarters of the dreck out there.

Disc wise UNIVERSAL always puts out quality stuff and this one holds those same standards. We get a well-done feature commentary track with Craven and select cast members. Alternate opening and closing scenes, deleted scenes, etc. Also the BD Live content and the pocket BLU app that I have yet to try but intend to very soon (just got myself and Android phone, so now I can).

MY SOUL TO TAKE is Wes Craven doing what Wes Craven does best. He falls just shy of making THE RIVERTON RIPPER a Freddy Kruger but that same chemistry is there, you can see it, and you can feel it. It just doesn’t quite get there.

Go pick it up and see what you think. I’m thinking you won’t hate it as much as other folks would lead you to believe. I know I sure didn’t.