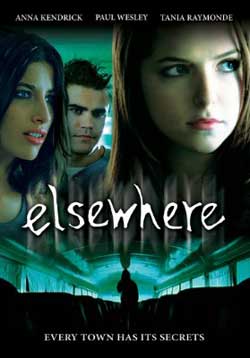 Small-town life goes topsy-turvy when young girls start disappearing out of thin air. But things get uncomfortably personal when Sarah (Anna Kendrick) learns that her best friend, Jillian (Tania Raymonde), has joined the ranks of the missing. The trouble is, only cryptic clues remain: Jillian’s diary, a puzzling message that was sent from her cell phone — and Sarah’s prior knowledge that her friend had been meeting strange men online.

A thriller should be thrilling, keep you on the edge of your seat, biting your nails waiting to see what happens next. A mystery should keep you guessing till the end, never knowing from the list of suspects, who actually did it. With “Elsewhere”, first-time writer/director Nathan Hope gives us mystery-lite. This micro-budgeted thriller had its heart in the right place, but never rose above TV movie-of-the-week quality. An interesting setup that left me wishing I was actually “Elsewhere”.

In a small town in Indiana, two girls, Sarah and Jillian, have a strong friendship even though they are polar opposites. Sarah (Anna Kendrick) is an ‘A’ student, athlete, and all around good girl that everyone in their small town adores. She lives with her mom who is just as driven as her daughter but is a workaholic that sometimes puts a strain on their relationship.

Jillian (Tania Raymonde) is the black sheep of the town, always pissed off, wearing her attitude on her sleeve. She is constantly looked down on by her mother, as well as the residence of the small town they live in. She longs to be “Elsewhere”, anywhere but there. She has hopes of meeting a man online who will take her away from everything she hates and give her the life she has always dreamed of. Even though it is risky meeting strangers, she jumps in without a second thought.

Sarah and Jillian split up for the night, both with their own agendas. Jillian has a date with one of the men she has met online that is referred to as Mr. X, while Sarah goes to a party, hoping to hit it off with Chris (Joshua Swanson). Jillian warns Sarah about Chris who gets a bit aggressive with her only to be saved by the resident computer geek Jasper (Chuck Carter) who secretly harbors a crush on her. They leave the party together and everything seems well till Sarah receives a mysterious video on her phone from Jillian. Sarah makes numerous attempts at trying to contact her friend but comes up empty. She shows the video to Jasper and together they seek help from the locals, Jillian’s mom, her ex, a crooked cop, their co-worker Darla and her father Mr. Tod (played by genre character actor Jon Gries). All of these people have had run-ins with the girl and all of them may or may not have played a part in her disappearance. They are both shocked
to find out that no one is willing to help and no one really cares what happened to Jillian, they are on their own.

The film follows Sarah on her quest to unravel the mystery behind her friends disappearance, an emotional role for any young actress. Anna Kendrick has a likable quality, a girl next door type of sweetness that you want her to find what she is looking for. The rest of the cast is pretty solid and did their best with the material they were given. Anna hopefully has a long career ahead of her, experience will help her grow into a much stronger actress. Along with Miss Kendrick, Tania Raymonde was fun to watch, a real character she helped to mold in Jillian, a firecracker with a bit of extra punch. Jon Gries is always fun to watch and it was nice to see him with a bit of a larger role we don’t usually get to see him in.

It seemed pretty obvious the film was shot with a very small budget but money was put in the right places and in a technical aspect, the film looked very good. Or at least as good as your standard TV movie. Director Hope has served as director of photography in television (CSI) and film (Hellraiser: Inferno, Mimic 2) so there is no doubt the man know his way around a camera. My main complaint with the film was the script. There were risks that should have been taken, twists that should have been made, but the script never strayed from its by the numbers formula and never felt fresh or interesting. I liked the setup, using the the MySpace-esque type website to find and murder young women, caught my attention. For whatever reason, they chose to play it safe with this movie. When it comes to a thriller, the audience wants to be shocked or surprised and unfortunately the only thing shocking was how slow the movie moved along. A setup that could have been
fresh, interesting, or exciting was downplayed and just became a dull and predictable thriller that will easily be forgotten.

Maybe if the film had been edited tighter, something could have been salvaged into a solid movie. Clocking in at 107min, it felt way longer, like it was never going to end. A movie should never feel longer than what it is, if it does, there are problems. There were a couple of side stories that were never fully realized or seemed rather unnecessary that could have been trimmed to tighten some of the slower spots but the film just never really seemed to gather momentum. All of the tension that was built was always a letdown, no real payoff.

“Elsewhere” had a decent cast and some solid directing. The script was the weak link and not even the actors or the director could rise above what was on the written page. Nathan Hope also wrote the script and something tells me he may be better suited to running that camera he has spent the majority of his career behind. He is a talented cinematographer and has a future as a director. I would be interested in seeing what he could with a much better script. In the meantime, maybe he should direct a few more episodes of “CSI” and sharpen his skills while wating for a much better script. I really hope to see more of the films cast, especially Anna Kendrick (though I will be skipping “The Twilight Saga: New Moon” in which she reprises her role of Jessica). Maybe when this film starts to air on cable, they will trim a bit of it, edit it for content and time, then I can honestly say “Elsewhere” will have a home constantly airing on weekend afternoons on the Lifetime Network.