While the Doctor is off sawing up patients for bit parts, we received this special FX interview from Scott Essman of Visionary Media who interviewed FX Artist Ozzy Alvarez…………

One of Hollywood’s most respected and in demand ‘creature and makeup effect’ houses, the team at Quantum Creations FX has been responsible for some of the scariest creatures in movie history, including: I Am Legend, XMen III, Superman II, War of the Worlds, Fantastic Four II, Cabin Fever II, and Bogeyman II among many, many others. Ozzy Alvarez was the creature designer on SPLINTER. 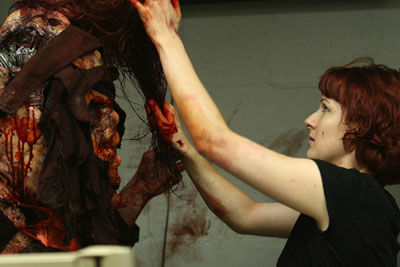 This film featured only six actors and all worked to some degree with the makeup effects: Blake (played by CHARLES BAKER) is the gas station attendant who first sees the creature and is infected by it. Polly (JILL WAGNER) escapes the creature with her boyfriend Seth (PAULO COSTANZO). Dennis (SHEA WHIGHHAM) is a psychopath who loses his entire arm in the process in one of the film’s most startling effects – an actual amputation on screen. His girlfriend Lacey (RACHEL KERBS) gets badly infected by the creature and Sheriff Terri (LAUREL WHITSETT) is ripped in half by the creature. In this exclusive interview, Alvarez discusses doing all of his work practically like the old masters including Dick Smith, Rick Baker, and Rob Bottin.

How did your work on the start of this creature feature begin?

Toby came to us with initial designs which was challenging. Building a creature suit without an actor is challenging. His idea was for multiple appendages: puppeteered arms with an actor in a suit. It took an actor and three puppeteers to make it. Each person that the creature kills is morphing body parts into it. We had to maneuver the arms separately within the actor’s arms. I did a three-hour makeup on an actor. Then was in the suit a half-hour and started throwing up. The Lacey creature had multiple appendages.

One of your best effects in when Sheriff Terri is torn in half by the creature.

When the cop got ripped in half, we had everything set up and literally ran out of time. I told Toby that he wasn’t going to get a bunch of takes. The final call was to move it to a later date. We ended up shooting it in LA as an insert shot when the skin rips and the blood comes out.

Did you use any special materials for the different effects in the film?

All of the creature work was traditional style foam latex. We had silicon rod-puppeteered arms with cable-controlled fingers bending back. For the amputation of Dennis’ arm, his real arm was back with a shoulder harness. There was a hollow gap with blood tubing. Seth used a real box cutter and cut through the silicon arm that was attached to Dennis.

How difficult was your schedule on the film?

Shooting these types of movies 16 hours a day on location is really hard. Sometimes you look at the footage and it looks like sh*t. It’s always hard to tell, but with Toby directing and coming from a visual effects background made it easier for us. I was there five weeks – four weeks shooting all nights in the middle of Oklahoma – hot as hell and cold at night. We would wrap at 7AM. Set call was 5PM.

Did you perform in any of the creature suits or props?

We made a Lacey puppet, part of the suit, and that’s me outside the window smashing against the glass as hard as I can, covered in blood. The Dennis hand is my hand tied with monofilament pulling back. When the arm is reaching through the night deposit box, it is makeup artist Danielle Noe’s arm that I painted to look like the creature! We went back to old school Tom Savini-type ways to make the practical effects look good.

Yes, it seems like you referenced classic late-1970s and early 1980s film with your designs.

100% for sure, this was straight out of The Thing, The Howling, American Werewolf, and Alien. We tried to make everything practical. Nowadays, people choose effects to be digital. Then, we tried to mix it up with some new techniques. We tried to innovate what little we could with the time we had. I think we accomplished everything that Toby wanted.

I was reminded of Rob Bottin’s effects in The Thing with this movie!

Bottin is like the best makeup artist ever to do the effects that he did in The Thing. You can’t do them better digitally. When the Norris head has the spider legs coming out!!!

Lacey’s hand was one of the best effects in the film… it moved around like a real hand but with jerky movements like a foreign creature would use to make a human hand move!!!

There was two version of the Lacey hand. That hand was puppeteered from below with magnets. We went though a fake floor so it doesn’t look like monofilament. It’s two magnets tracking each other. That dark black blood reacts to the magnet also. There are tiny bits of metal in the liquid to make a spiky pattern. It’s called Ferol fluid. We did research on it and found it. It was $100 for six ounces. That’s how we got the blood to react that way. We could take that fluid on a magnetized board and make spikes come up. There is some cool potential with that.

Was there any digital work done to enhance your practical effects?

Some of the spikes are digital. We made tiny steel rods so they could look like needles. Some of that was pushed through fake pieces of skin and fake arms so that we could maneuver the spikes towards the people. They walk close to the body and the spikes lean towards them.

Describe your relationship with Quantum?

Quantum made everything for Splinter. Christian Beckman was Steve Johnson’s coordinator at EdgeFX. After Steve went out of business, Christian opened up Quantum with Jeff Rawley. I came in and supervised everything and took it all to set.

What is your future in special makeup effects?

I would love to do more films in the horror genre and try to keep it as practical as possible. With the bigger budget stuff, doing digital effects, you forget how to do it with makeup. For me, I want to keep challenging myself and hopefully I could do a lot more horror films.