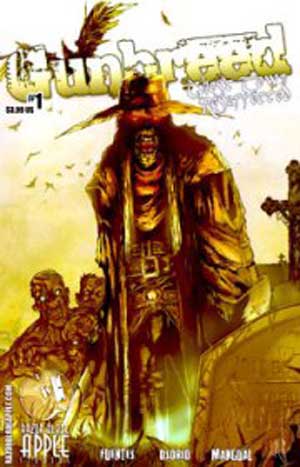 “A grudge is a terrible thing to die for, but a hell of a reason to come back from the dead. Gunbreed is a supernatural western about a Sheriff who witnesses the death of his son and the people of his town at the hands of a criminal gang that practices black magic. Powder Cain comes back from the dead to get his revenge.“

Artwork: 4.0 out of 5
The cover and interiors in this issue have a real nice look to them. Just on character designs alone I am impressed. The coloring brings out another element though and it is what makes this issue shine. Nice look monsters and some good ol’ gore just make me enjoy what I am looking at even more.

Story: 3.5 out of 5
I liked the overall idea behind this story. I felt that the flaw was it was told too fast. Now that doesn’t mean that the issue moved at too fast of a pace, just that there seemed to be jumps from this part to that part, and it left me a little confused. However when I was done with the issue I got the over idea down nicely. I just would have rather seen it play out over 3 or 4 parts.

Dying Breath: 3.7 out of 5
This is the first book I have had the pleasure of check out from Razor Blade Apple Studios, and I liked it. The artwork does shine above the story here, but I think that with time the two can easily balance each other out. I look forward to seeing where this series goes, because I think there is something to build on for sure.

If you would like to buy Gunbreed: Ghost Town Ressurected #1 and check out what else Razor Blade Apple Studios is up to please go to www.razorbladeapple.com/