TV Review: The Hitchhiker’s Guide To The Galaxy (1981) 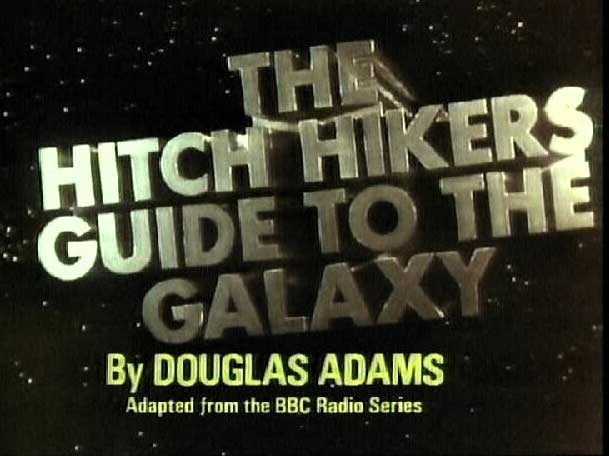 An Earth man and his alien friend escape Earth’s destruction and go on a truly strange adventure as space hitchhikers.

“There is a theory which states that if anybody discovers exactly what the universe is for and why it is here, it will instantly disappear and be replaced by something even more bizarre and inexplicable. There is another theory which states that this has already happened.” So go the metaphysical musings of the late British humourist and author Douglas Adams in his best-selling cult novel The Hitchhiker’s Guide To The Galaxy, a pre-Red Dwarf mix of philosophy, science fiction and satire that would fill four more volumes (The Restaurant At The End Of The Universe, Life The Universe And Everything, So Long And Thanks For All The Fish, and Mostly Harmless), a long-running BBC radio serial and, ultimately, a six-part BAFTA-winning television series. 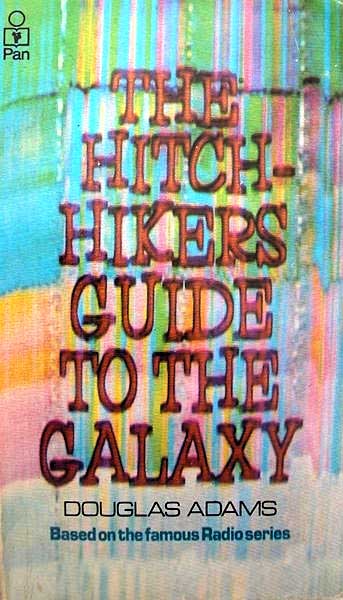 If it is indeed possible for a writer to create his own moral universe, then thousands of downtrodden philosophy students must surely owe Adams a debt of sapient gratitude. The books Where God Went Wrong, Some More Of God’s Greatest Mistakes, and Who Is This God Person Anyway? are cited as philosophical best-sellers, but none (we are told) were as popular as The Hitchhiker’s Guide To The Galaxy, the bible for intergalactic vagrants or the overzealous science fiction fanatic, with big bold reassuring words on its cover: Don’t Panic. 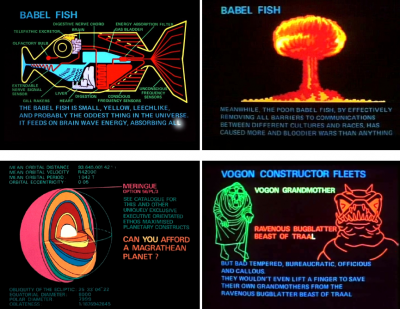 Adam’s strength is illustrating the impertinent bureaucracies of life and making them even more absurd. Such is the case when we are introduced to lead character Arthur Dent, a six-foot-tall ape descendant who is about to have a bypass built through his home. While arguing with a council worker about the legitimacy of a planning permit, he (along with the rest of Earth’s inhabitants) is unaware that aliens are about to drive a hyperspace bypass through the Earth. Luckily his close friend Ford Prefect happens to be from outer space, and is there in time to whisk Arthur away aboard a ship to relative safety. While the television series faithfully captures Adam’s random philosophical rants, more pertinent is the use of humour when the common man is faced with total extinction: “Going To The Game?” – “No point.” – “Arsenal without a chance?” – “No, the world’s about to end.” – “Lucky escape for Arsenal then.” 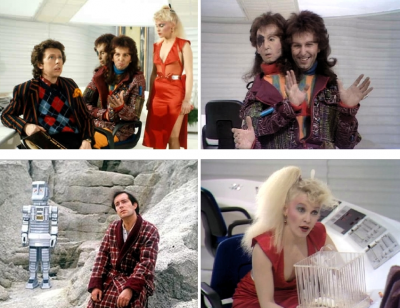 While The Hitchhiker’s Guide To The Galaxy’s production standards offer little more than an old episode of Doctor Who (somewhat suitably as Adams wrote this while working on the Doctor Who story The Pirate Planet), it more than makes up for this shortcoming with clever dialogue, weird scenarios and wonderful characters, such as Marvin, the paranoid android with a brain the size of a planet who is inflicted with GPP (Genuine People Personality), there’s an intergalactic war between the G’gugvunts and the Vl’hurgs and, for the main course, we have The Restaurant At The End Of The Universe. All the while, the handy Hitchhiker’s Guide To The Galaxy offers an assured narrative through the many quirks of the universe, such as the fact the Earth is actually a supercomputer built to calculate the question to the answer to life, the universe and everything. 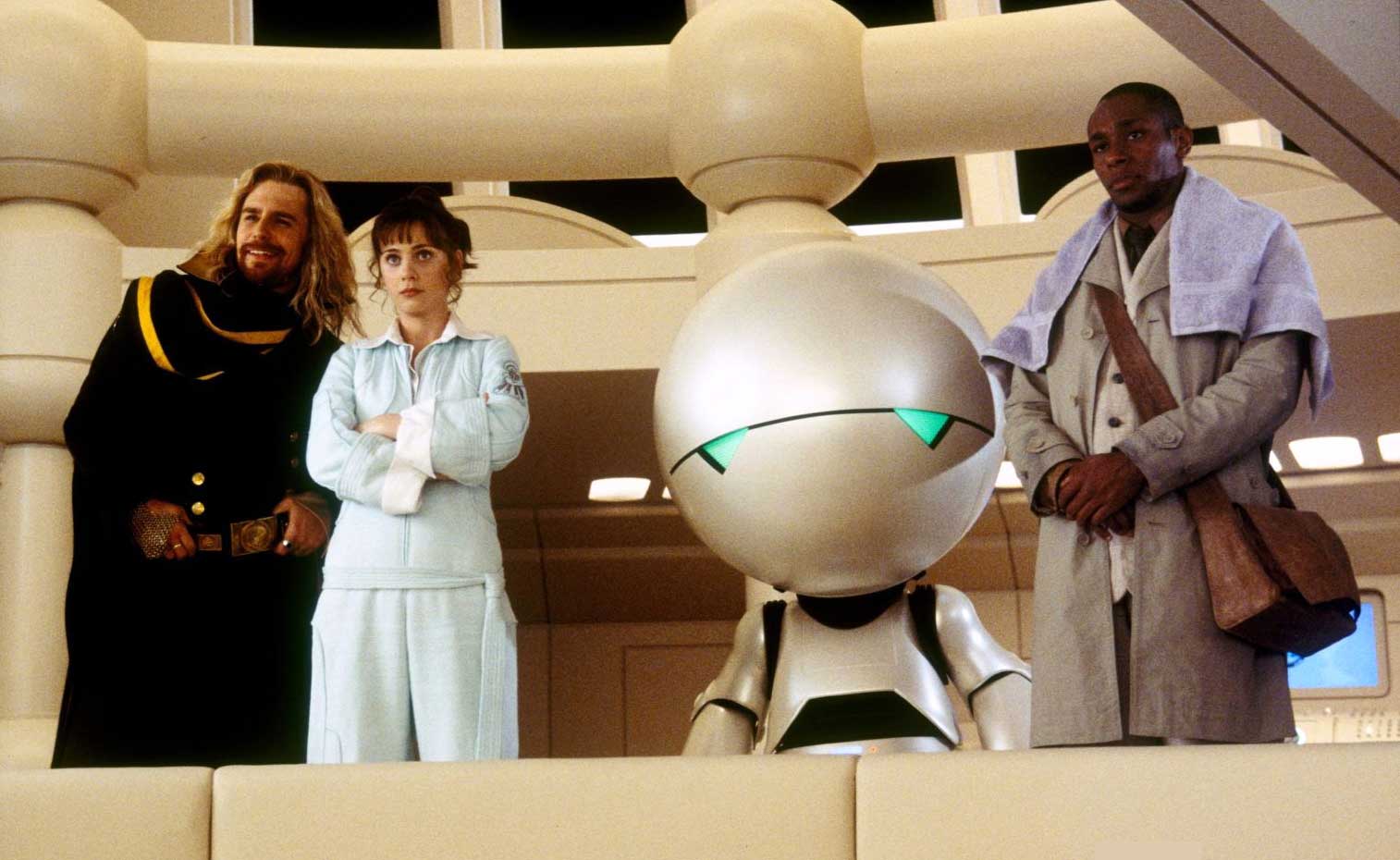 Episode #1: One morning, Earthling Arthur Dent (Simon Jones) wakes up to find bulldozers outside his house ready to demolish his home in order to build a bypass. His day goes from bad to worse when his friend Ford Prefect (David Dixon) tells him that he is, in fact, an alien from the planet Betelgeuse on Earth to revise his entry in The Hitchhiker’s Guide To The Galaxy, and that the Earth is about to be destroyed by a Vogon constructor fleet in order to make way for a hyperspace bypass. Ford and Arthur escape the end of the world by hitching a lift on the Vogon ship, where their problems really begin.

Episode #2: Arthur and Ford are subjected to a fate worse than death – Vogon poetry (the third worst poetry in existence) – before being thrown out an airlock to die in the cold of space. Twenty-nine seconds later they are improbably rescued by The Heart Of Gold, a spaceship powered by the Infinite Improbability drive and captained by one of Ford’s relatives, the two-headed three-armed Zaphod Beeblebrox (Mark Wing-Davey), and crewed by Marvin the paranoid android and Trillian (Sandra Dickinson), a girl Arthur had once met at a rather bad party.

Episode #3: The Heart Of Gold is headed for Magrathea, a planet thought to be a myth. Approaching the planet, they set off an ancient guided missile defence system. They escape when Arthur activates the Infinite Improbability drive, turning the missiles into a sperm whale and a bowl of petunias. Deep inside the planet’s core, Zaphod, Trillian and Ford are attacked by a mysterious enemy while Arthur encounters the planet’s designer Slartibartfast (Richard Vernon), who shows him his latest work, Earth Mark II.

Episode #4: Arthur learns about the supercomputer known as Deep Thought (Valentine Dyall), created to answer to the ultimate question of life, the universe and everything. Deep Thought’s answer? 42. In order to decipher the computer’s answer, the scientists build a bigger computer to work out what the ultimate question actually is. This computer was called Earth. The current overseers of the project, aliens who happen to look like mice, want to cut Arthur’s head open to find the answer. When galactic police arrive to arrest Zaphod, our heroes escape only to find themselves pinned behind a bank of computers by the gun-toting fuzz.

Episode #5: The crew find themselves at The Restaurant At The End Of The Universe, where it’s possible to wine and dine in fine style while the universe ends around you. They discover the ever-faithful ever-complaining Marvin waiting for them in the restaurant car-park. They decide to steal a spaceship, unaware that it is a stunt-ship for Disaster Area (the loudest rock band in the universe) pre-programmed to plunge into the sun.

Episode #6: Marvin sacrifices himself in order to save the crew. Transported off the ship, Arthur and Ford are separated from Zaphod and Trillian. They find themselves on another spaceship hurtling toward a tiny green-blue planet that they find oddly familiar. Could it be Earth? Could they be on the verge of discovering the answer to the ultimate question? 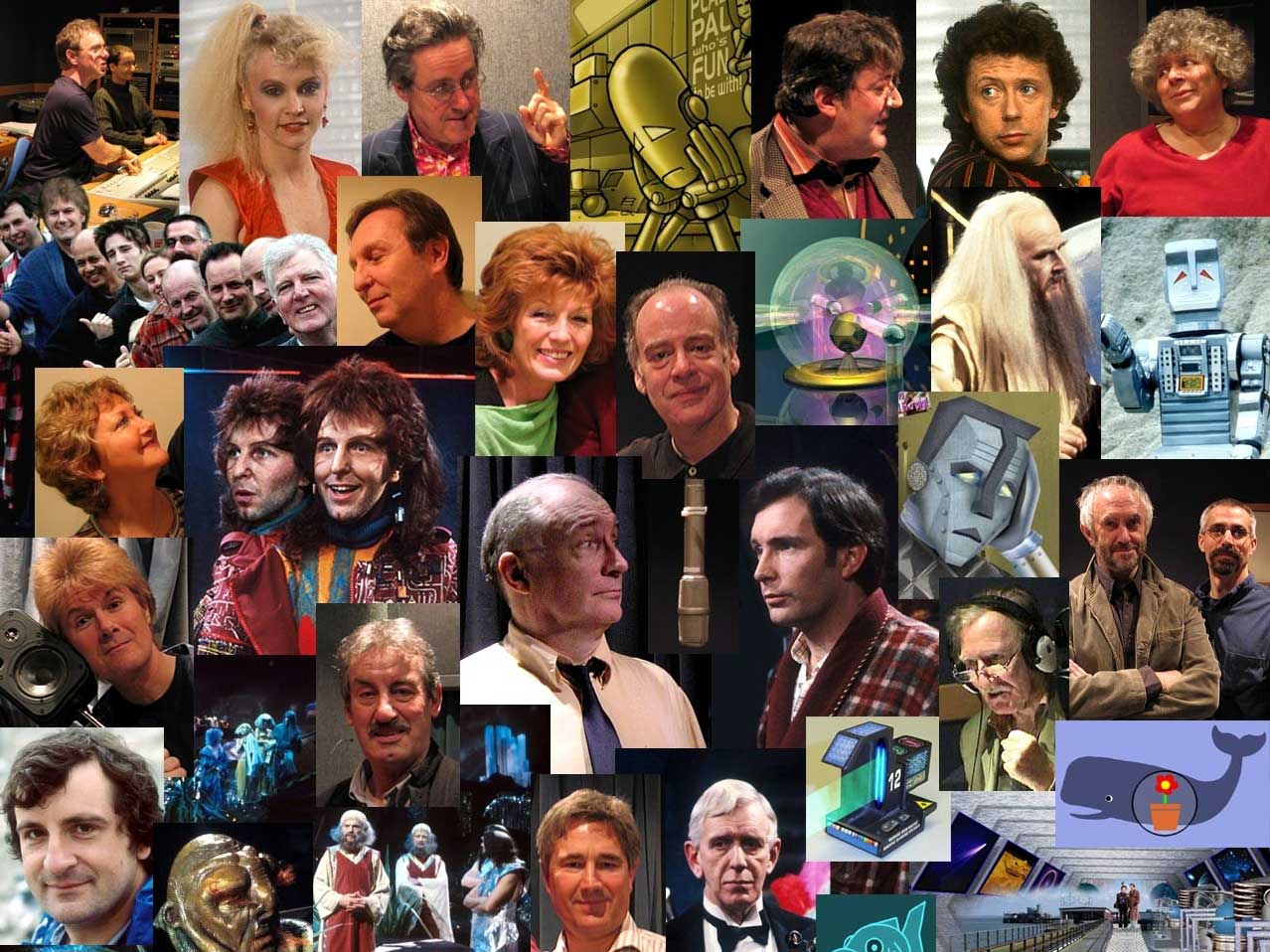 Before I wrap-up I must make mention of the film adaptation of The Hitchhiker’s Guide To The Galaxy (2005), which differs widely from that of the radio show, book and television series. The romantic triangle between Arthur, Zaphod, and Trillian is more prominent in the film; and visits to Vogsphere, the homeworld of the Vogons (which, in the novel, was already abandoned), and Viltvodle VI are inserted. The film covers roughly events in the first four radio episodes, and ends with the characters en route to the Restaurant at the End of the Universe, leaving the opportunity for a sequel open. Despite some inspired casting (Alan Rickman as Marvin, Stephen Fry as the book, Bill Nighy as Slartibartfast) and design choices (The Heart Of Gold looks like a china teapot), the end result is sadly far less than the sum of its parts. Please join me next week, as I once again dip into the cesspool of cinema to bring you another schlocker for…Horror News! Toodles! 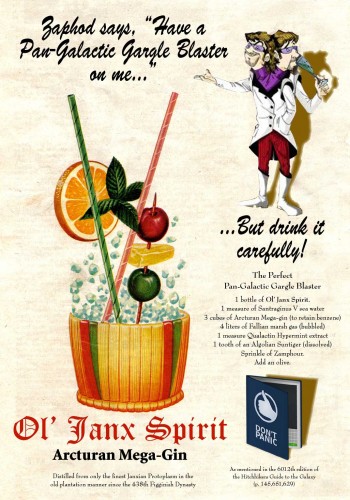 The Hitchhiker’s Guide To The Galaxy (TV series)