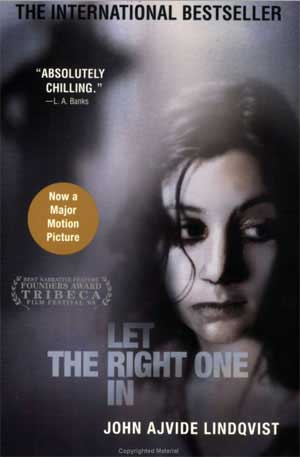 LET THE RIGHT ONE IN

Patience is a virtue I don’t have. For months now I have been hearing about how great this Swedish film “Let the right on in” is. Normally I don’t buy into hype as my movie taste tends to be the exact opposite of every one else’s, but the problem with “Let the right one in” has been everyone has said this movie is nothing short of amazing, and I mean everyone (Your mom too).

So what I’m trying to say is this- I really wanted to see Let the right one in after the 900th positive review I read. The problem I faced was I live hundreds of miles from any city playing the film. Seriously why do L.A. and NY get all the fun? So while I wait for the eventual DVD release I had no choice but to track down the book in which the movie is based on. I can say now, that after reading the book, my anticipation has gotten a hundred times worse.

Let me in, or as it’s now called Let the right one in was written by John Ajvide Lindqvist, a former Swedish comedian that found his true calling as a writer. The title if you are curious refers to the rule that some vampires must follow, they must be invited into your home or building before they may enter. A simple gesture that symbolizes the dangers in those we chose to trust, people we consider a guest.

Right from the start Let the right one in gets to work with its strongest feature, the setting. Blackeberg Sweden is so fully realized as a decaying planned community you feel the snow and despair the minute you open the book. Maybe it’s because growing up in Rochester NY where it snows half the year and the city crumbles around you I could relate, but Blackeberg feels more real than anything else in this book. You know what’s right down the road, you know how it smells out side, and you know how grey the world is. Lindqvist sculpts the world of Blackeberg like Michelangelo, weaving it in a way I have not seen in any modern authors, it’s an essential piece to the grand puzzle he builds with this book.

The other amazing thing about Let the right one in is that it never once takes its audience for granted; I would go as far to say Lindqvist knew who his audience was before he wrote the book. If you are buying a vampire book anywhere in the world you have lived through the 80’s, you know what a Rubix cube is, and you defiantly know what a vampire is. Not a single sentence is wasted in the book explaining to you what you already know. Lindqvist knows you know what a vampire is and he never talks down to you about it, they simply exist and they follow the rules that you the horror fan have had pounded into your head sense the moment you wondered what they were. There is nothing I hate more than having something as simple as KISS or a Rubix cube explained to me like a retarded child when I already know. It’s also a breath of fresh air that Lindqvist is a rare few that doesn’t see the need to reinvent the vampire and put his own twist on it, they are fine the way they are and don’t need special twists to make them uniquely his own. Honestly any changes to the vampire just make them pathetic or emo some how (Twilight anyone).

The story follows Oskar; a doughy pre-teen boy whose life is turned upside down when a girl moves next door that may just be a vampire. Oskar faces all the hardships anyone in his situation would face, a broken home, angst, social awkwardness and above all else bullies. Again Oskar is a moment where Lindqvist shines, he knows his reader. Let’s face it, if you bought Let the right one in, you were the one receiving the beatings not giving them. He wastes no time explaining to you the humiliation of being bullied, you remember it all to well. Oskar, much like most of us I think, tries his best to find a way to vent his frustrations about the helplessness of his world, in the form of an obsession with crime and serial killers, something he sees as a form of power he could have one day. You quickly begin to relate and sympathize with Oskar, especially when he notices the strange new girl that lives in his apartment complex.

Who is she? Why does she only come out at night? Isn’t she cold? You wonder with Oskar and slowly you are pulled into the spider’s web. The character of Eli and her relationship with Oskar is put together slowly. You get the details in little pieces throughout the story, yes Eli is a vampire, and I’m sorry if I spoiled that for you. What makes Eli great in Let the right one in is how she’s approached. If you had young girl who was a vampire how would she function? How can a child hunt an adult? Who would you find to take care of you knowing your secret? Questions are posed and answered realistically throughout the book giving Eli more depth than most characters especially vampires. Eli slowly morphs beyond her monster archetype into something more- and no not human- she becomes an anti hero a character you root for despite her murderous ways. As cynical as I am, you really do get wrapped in the budding romance of Oskar and Eli despite all of the bumps and turns in the road Let the right one in throws at you.

Every aspect of Let the right one in is slow and deliberate. All the players and plot points all have a purpose that you aren’t sure of until the piece is in place. Much of the horror traps you; never do you realize what is about to happen until you’re in too deep, too vested in what’s going on and the characters until it’s too late. There are some genuine moments where you want to drop the book and run but you can’t, you have become too wrapped up in its world to not know what happens next despite the Horror, Ooze, and Disgust you find along the way. The book is nothing short of amazing and deserves all the acclaim and more the movie is getting. It took a dusty old genre and pumped it full of fresh blood, not by revamping it from the top down but by sticking with what works and approaching it from another angle. I can’t recommend Let the right one in more and hopefully it serves as a nice companion to what I hear is a great movie.

Tags John Ajvide Lindqvist Let the Right one in 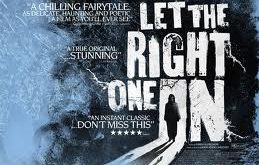 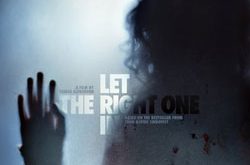