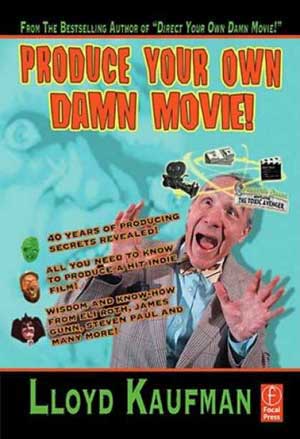 First question? Does this guy ever sleep? LLoyd Kaufman is as loony and prolific as they come. He also happens to be a damn fine business man. Well if I’m not mistaken, this is the 3rd book by LLoyd which is a follow up to this other 2…. “Make your own damn movie” and “Direct your own damn movie”. At this point I’m beginning to see the big picture. A box set full of Lloydisms and thoughtful insightful advice. As you can tell from the title the focus on this one is producing. Now for those who don’t know what that means, then this book is for you.

If you do, then this book is still for you …however producing is an art in itself that as Lloyd puts it can very from doing nothing and contributing dollars or to a full scale effort of helping the movie shape, form and and mold into the product it’s meant to be. Kaufman is best at laying it out like it is…no cheesy professor speak or inspiration talk.

You either cut it or you don’t. Though film as it’s hinted at is a highway full of fools, lies, joys and accomplishments. It’s also a road for failure just like any other profession. Now Kaufman has his share of friends too in the business. Some of them started like him and went on to be “Oliver Stone” like for instance …Oliver stone. Other have gone on to do things in different avenues and have crossed paths many the time. The business as it’s explained is a tight group that almost feels like a traveling circus of performers who meet on the roads across the world. Kaufman has had his share too which has taken him all over to infuse his production talents. His friends in the business were kind enough to stop and contribute some words of wisdom along the way ..which is always a highlight to hear from a mix of great talents. so of these include: Mick Garris, Joe Dante, Eli Roth, Roger Corman….shall we go on?

Just buy the damn book and find out for yourself! Only kidding …there is alot of ancient chinese secrets in these temples so follow your path to enlightenment. Golly $14 on Amazon, for wisdom .. Ipay at least $30 a meal for good ttp not so good fried foods that I crap out 30 minutes later. At least here you get to keep the prize. Oh and extra bonus..this ones got pictures…..(commence with electronic monkey clap) So there ya go!

Now for clarification there is alot of pages that are sectored as in process conversations. Perhaps this is to educate the numbskulls on what a typical producer luncheon talk sound like. Some times it just plainly sounds like alot of bullsh*t but that is “exactly” the purpose here. There is alot of dung flying within producer land. Hey it also makes for legal great tax write-offs, so meet, meet, meet and produce!

Kaufman has his own style this is reflective of his style of movie making. He’s humorous, smart, observant, educated and at times completely insane. All the workings of a long timed producer. His pages lay out several days of exploits, situations and issues that pop up like chickens smacking for feed. We get to see copies of letters sent, emails and even screen shots of his ….credits and actors list. Heck the credits list is practically a roll of toilet paper in itself…no pun intended. Was that intentional of did he need to fill up a few pages one night to catch an early nap?

Well there’s lots more here. Lloyd goes over financials, selling films, making films cheaply and reusing scenes as much as you can get away with. Now that’s talent!

Here’s the thing, I want you to love this book as much as I do. In fact so much that me and you should grab those other 2 first books while we are at it. I think it would make a good looking post on my filmmaking shelf with the entire Lloyd collection at fingertips. Enjoy and have fun with it!