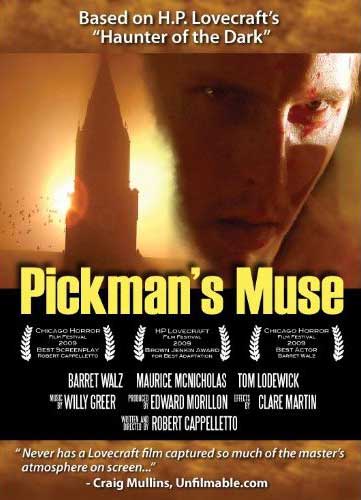 Robert Pickman is an artist who has seemed to have lost his passion. Robert sees a doctor who makes sure that Robert is constantly in supply of pills to make him feel better, even Roberts landlady wants to help by introducing him to her pretty niece. Robert however doesn’t need love or emotion he just needs an inspiration and soon it comes….but is it really want he wants?

“You know what they say nothing improves the price of an artist work more than death….or insanity!”

Robert Cappelletto’s film Pickman’s Muse is a wonderful example of cinema influenced by the works of H.P. Lovecraft. Those who are familiar with Lovecraft already know that the title is obviously a reference to the short story Pickman’s Model and there is a lot more than just a title that has left its influence here.

Pickman’s Muse is a moody and almost depressing film at the beginning in which the viewer watches a group of people at a theatre who are laughing and enjoying what they are what they are seeing, well everyone except for Robert Pickman who sits with a blank look on his face. After we are introduced to Robert this way we soon get to see how he goes about his life, it is said in the film that he is very reliable and that one could set a clock by him so obviously his life has been this way for some time.

Roberts’s life is consumed with visits to Dr. Dexter, a man who wants to help Robert find some sort of happiness and supplies it to him in the form of pharmaceuticals. Robert also tends to deal with an art dealer who has put in so many orders for Robert that he is now behind; Robert simply hasn’t had the inspiration to paint anything. The dealer implies in their conversation that Robert mostly paints seascapes and images of lighthouses and other drab artwork that one normally sees decorating the walls of your local motel. When Robert returns home he meets his landlady who seems to think very highly of Robert, so highly in fact that she wants to introduce and set him up with her niece who is coming into the city. No matter what life throws at Robert during the course of the day however it always ends the same with him sitting in front of a blank canvas at his house listening to the barking of an annoying dog next door.

Things start to change for Robert however when he wakes up one morning and looks out his window at an old fashioned church. He soon begins to frantically sketch in an attempt to capture the image of the building and eventually sits down and for the first time in a long time he puts paint to canvas. When Robert takes the new painting to his dealer his dealer is aghast for many reasons, first the painting is nothing at all like the rest of Roberts work and second the piece actually looks like a painting done by a man named Goodie Hines.
Goodie Hines is the kind of artist most often found in horror cinema. The man went insane and claims to have been able to “see” into another world full of forgotten gods and legends. Hines paintings were often twisted and hypnotizing glimpses into a dark and evil world that got a reaction out of almost anyone who had laid eyes on one. Robert’s dealer informs him about Hines past, including the fact that he went insane and killed some people then plucked out their eyeballs, it is also quite convient that Goodie Hines is still alive, and in the care of Dr. Dexter who is Robert’s doctor as well. 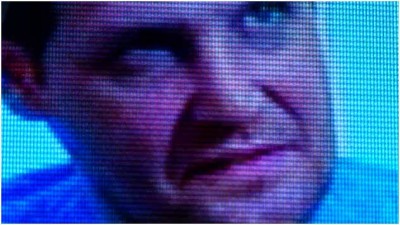 With his new found inspiration Robert begins to paint at a frantic pace, he also starts to hear strange voices coming from the shadows and at one point even gets the urge to kill a young delivery boy all for the voices need. It’s only after Dr. Dexter gets a hold of one of Robert’s sketchbooks and compares it to one of Goodie Hines’s that he realizes there is something strange going on. The images in the sketch book look like photocopies of each other, whatever madness had inspired Goodie Hines now seems to be inspiring Robert Pickman and we all know where this one is going to go. 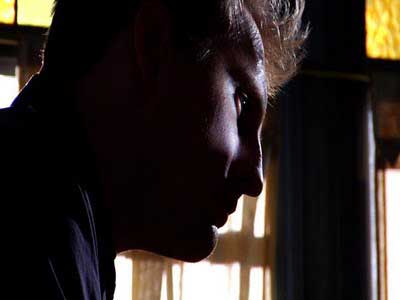 Robert Cappelletto’s Pickman’s Muse is a wonderful example of atmospheric horror. There isn’t a whole lot really shown on the screen with the exception of a person with their eyes gouged out that is briefly seen. Most of the horror of the film is not shown at all to the viewer; instead the viewer gets to witness other people’s reaction to the horror. For instance not once is one of Robert Pickman’s or Goodie Hines’s paintings ever shown on camera, instead the viewer watches as Roberts landlady and niece gasp in horror when they see the painting Robert is working on. In another scene a would be victim is bound and asking what is going to happen to her and Robert simply shows her one of his paintings which causes the young girl to once again go into a fit of screaming.

Cappelletto’s pacing is also very excellent in the film as there really isn’t a slow moment, even though most of the tone of the film is depressing and somber the film actually does move at a great pace not lingering on one subject for too very long. The music and cast also help carry the film along and really prove that good films can be made that are inspired by the works of H.P. Lovecraft.

Lovecraft fans and those who love their horror drenched with atmosphere are going to want to pick this one up, however those who are looking for the red stuff are probably going to end up bored with this one. 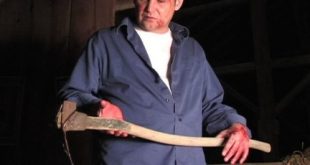