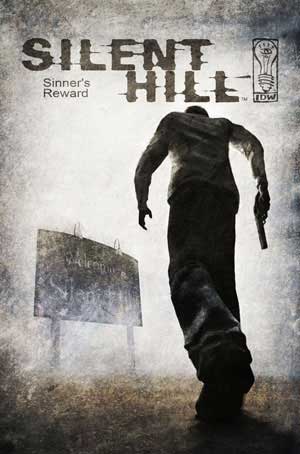 You’ve entered into somewhere unfamiliar. You’ve crossed over into a twilight zone of a new kind. Where life, death, monsters and abnormalities are all askew. This place can only be the land of “Silent Hill”. In our latest read by the fine folks at IDW we have a new TPB called “Silent Hill: Sinner’s reward” Our visionaries .. writer Tom Waltz and artist Steph Stamb. Rich in grainy dark and high contrasted colors, Steph lays down his best in the ultra weird world of Silent Hill. Colored pencils, ink and chalk maybe make up this impressive display of modern dark fantasy imagery. And if that wasn’t enough they were kind enough to add a few more full page illustrations in the back of the book. Creepy and stylized. Now I admit to really only knowing what I’ve seen from the film than living the transitions from games, to comics to movies. So my perspective is pretty new to the series. Much like the commentary that Ivan Brandon welcomes you in with.

Though as strange as Silent Hill is, I really like it. A few familiars pop up from the film such as the nurses and the pyramid head. Even some of the more obscure metamorphs (as I shall name them just for today ) twist, turn and invade your vision with anatomically incorrect masses of monster mash. In all it feel like one of the levels from Dante’s inferno …a living nightmare and portal into hell itself. Our author Mr. Waltz takes us on that journey.

This round we meet up with hit man Jack “The pup” Stanton. (referring to his early childhood memories of being asked to shoot his own dog) He is on the lamb with his boss’s girlfriend in hand to seek out a new life. As it would seem. All looks to be going well into he stops at a local food mart and chats it up with the store owner. The store owner directs him kindly but into a land of no return. Just when he thinks all is well , Mr. Conway’s thugs show up and ruin the day. Mr. Conway, being the crime lord who’s girlfriend Jack decided to take for himself. Of course they all are in for more trouble than they anticipated as just around the bend lurks the land of “Silent hill”

Thugs, hit man or crimelord..it really doesn’t matter as they haven’t experienced what lies ahead. Greeted by metamorphs and weird looking creatures most do not last too long. Jack, a little more determined searches the town in hopes of finding his lost lover Jillian. Apparently the town gets to her first and changes her whole perspective. This new perspective seems to be the issue of death and reaping what has been sown. In essence, a payback for sins committed. Jack not buying it tries his best to twist the fabrics of this living nightmare to his advantage and get them both out. Though what awaits is not only a nightmare of dead familiars and distorted corpses but a calling to face his own fate and destiny. “The town has decided” as it is stated. Whatever normals you came in with are left behind in the land of Silent Hill. As the storekeeper states…many enter but few ever leave.

A great combo team for a great horror series. The writing is intelligent and gloomy. I was often reminded of DC ‘s line “The Spectre”.. an old favorite of mind that this book takes the tone of. This series is dark not only for it’s visuals but for its moral consequences some of the participants must face. For this one and more like it head on over to IDW Publishing.

Pick one up at IDW store