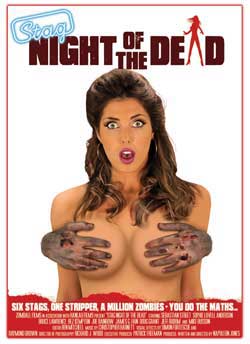 If the mysterious plague sweeping the nation wasn’t bad enough, Dean is still going ahead with his doomed wedding tomorrow morning. That leaves him with a choice. Pick up the button holes and chocolate fountain as instructed by bridezilla Elaine, or go with five mates (and a stripper) to play ‘Zomball’ at a top secret military compound where you get to shoot zombies with huge stun guns. Disobeying the golden rule of Zomball (‘never never humiliate a zombie’) the stags face overwhelming odds from the massed undead and each stag is hunted down. The truth about Zomball is finally revealed and suddenly the mother-in-law is the least of Dean’s problems.

The movie opens in a military-like compound in England. Seems there is a search for a vaccine to prevent people who are bitten by zombies from turning into one. More funding is needed, say to the tune of ten million dollars. Test subjects are desperately needed as well. Good thing our hero Dean (played by Sebastian Street) is getting married tomorrow.

Cut to one wild and crazy party where Dean is hanging upside down, strung up by his ankles and naked except for a fig leaf-like lizard thong (you kinda have to see it). Beside him is Candy (played by Sophie Lovell Anderson), a red leather-clad student turned stripper whipping him up good in front of his friends. Sounds like fun, doesn’t it? Well, this is just the beginning in what will prove to be a bachelor party to remember.

One of his friends, Marky (played by Bruce Lawrence), has something special planned. Everyone, including Candy and Dean’s father-in-law, get into a white limo and are driven to the compound where all the zombies are. They are about to partake in Zomball, a wild and crazy version of paintball.

The rules? Well, you get a stun gun in which to zap the zombies. This will render them immobile for five minutes. Look out for those recharge stations for your gun. Stay together, don’t go running off on your own. And last, never ever humiliate a zombie. Simple enough, right? Too bad our host, a huge guy in a black cape, forgot to tell our participants that the guns take ten minutes to recharge.

At the start, our guys are loving it, I mean, what could be more fun than zapping zombies? Candy stays behind, she has a bad feeling about the whole place, and doggone it, wouldn’t you know she’s right. It isn’t long before things go predictably wrong and it’s run to the safehouse and hole ourselves up time. 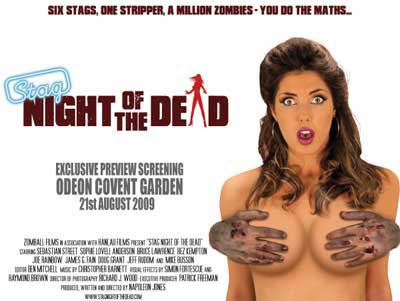 Stag Night Of The Dead is not a bad movie as silly zombie movies go. It is not meant to be scary and it never takes itself seriously. Although a little light in the gore department, there are more than enough cheesy lines of dialogue and silly moments to keep the viewer occupied. My personal faves, “You need to wake up and smell the putrid flesh, start seeing things for what they are,” and “who’s your daddy, white trash.”

The plot has some nice little twists and the pacing is good. You have your down moments here and there but they are really few and far between. The gore, as mentioned above, is light, but given the humorous tone of the movie, more than enough. Clichés abound, but in horror movies don’t they always? In a movie such as this, they are actually comforting to see. 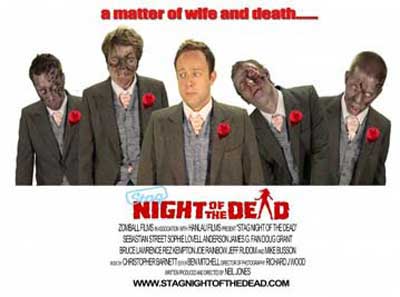 The stun guns shoot a ray slightly reminiscent of Ghostbusters, and have quite a range. You get to see lots of slow motion zapping as well. Dean’s friends are predictably silly and goofy but are fun to watch, especially as the horrors of their situation become more dire. When they are given the rules by the large man in the black cape, the scene plays out like an evil televangelist preaching the gospel, complete with organ music. So crazy and weird it’s great. Throw in a small butler named Mr. Big and you have one silly movie. Rent it if you’re a zombie fan or if you’re just in the mood for some light horror. Stag Night Of The Dead isn’t great by any means, but worth checking out once, preferably with a group of friends. 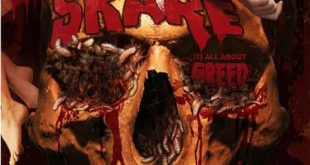 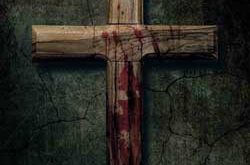