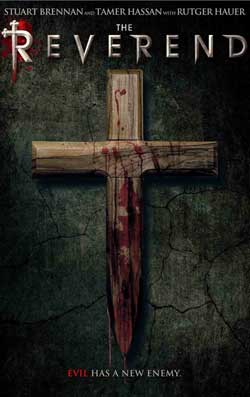 A Reverend begins his first day at his new parish only to be bitten by a vampire. His faith is soon tested when his thirst for blood and an encounter with a prostitute gives him a thirst for justice.

“I kick arse for the Lord!”

Every time a film involves men of the cloth battling the forces of evil with a heady blend of faith and badassery, I’m reminded of that iconic moment from Peter Jackson’s “Dead Alive” (“Braindead” to those outside of the states).  It remains a struggle since that first giddy viewing to keep the memory of that line and the chuckles at bay when I encounter similar characters in my cinematic travels.  It certainly helps in cases such as the recent “Hellbenders”, where one wasn’t expected to take the proceedings with any real level of gravity in the first place. 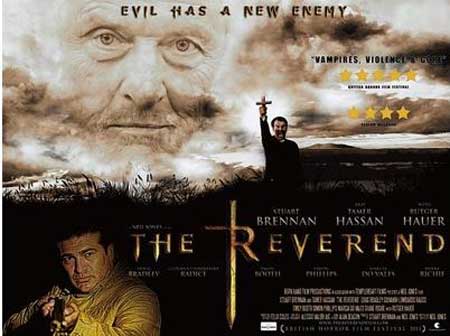 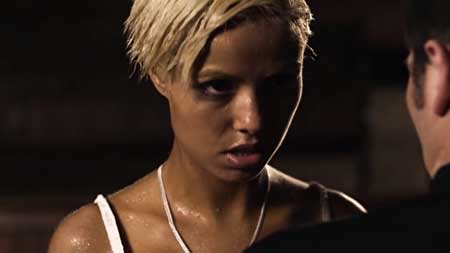 “The Reverend,” the latest from English director Neil Jones (“The Bond,” “Risen”), was a test of endurance to treat as seriously as it would have liked.  The opening sequence, as never-seen-again Rutger Hauer (having some fun) and Giovanni Lombardo Radice enact a modern rendition of God and the Devil’s hand-shake bet from the Book of Job, is a clear indication of the mixed bag in store.  With dialogue representing Shakespeare’s most talentless imitator adapting the conversation and populated with sword-brandishing vicars who serve as Radice’s guards (or live entertainment, it went by way of the latter for yours truly), I hadn’t a clue which direction this flick was going.  The credits, utilizing panels from the graphic novel by Jones, caused only further confusion. 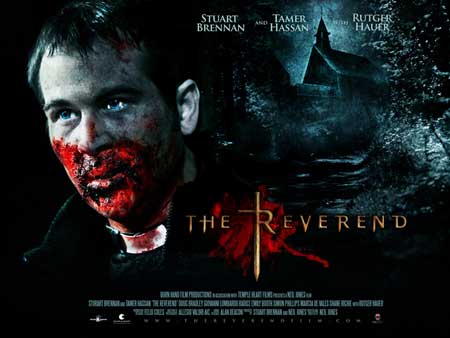 Said Biblical wager plays a pivotal role, so a quick summary: Satan believes if the faithful Job’s happy life were destroyed through tragedy, he will denounce God.  The Big Guy thinks differently, and the game is on.  That’s correct, friends.  God allowed a good man’s entire existence be taken away from him and devastated purely for “bragging rights.”  Credit to the film for pointing out that the story’s message of keeping faith no matter the odds is lost amidst the sadness for Job’s plight and God’s pomposity (or “dickishness,” if you will) in agreeing to it. 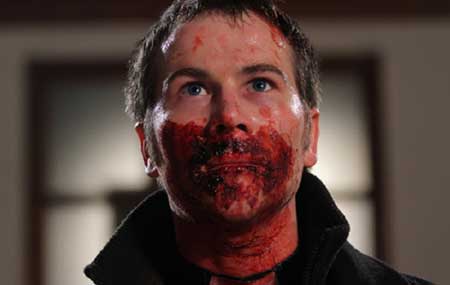 Our “Job” in question is the young Reverend (the only name we know him by), played marvelously by co-producer Stuart Brennan.  Unlike his inspiration, a test of faith arrives at the parish he’s newly appointed to in the form of a sexy, scantily-clad vampire (Marcia Do Vales).  After attacking him and taking a good-sized chunk out of his neck, he stabs her with a cross and she bursts into a ball of flame, disintegrating without a trace.  The wound quickly heals and he finds himself with an unquenchable thirst for blood, killing a neighborhood dog in his delirious fervor. 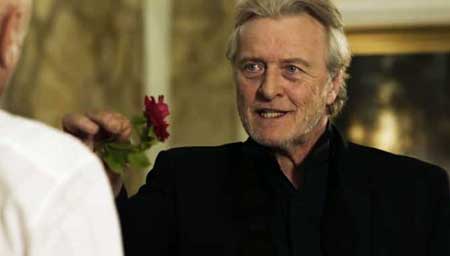 In one of many unnecessary moments, the Reverend visits an Internet cafe to educate himself further on vampirism, which leads him to a horror movie matinee in the back of a bar hosted by hooker-with-a-heart-of-gold Tracy (GoreZone Magazine’s “Princess of Demons” Emily Booth).  A rough encounter with her brutish pimp Prince (a shameless Shane Richie of “Eastenders”) and a couple of ridiculous dreams featuring a naked Vales (not a complaint) rambling about using his curse amongst other nonsense let us know in no uncertain terms what’s next.

Beginning with Prince, the Reverend works his way through the local crime syndicate, feasting upon the dregs of society and then killing them the moment they change, which occurs instantaneously each time but his own (his transformation took at least a day) for some odd reason.  This culminates in a bloody encounter with evil entrepreneur Hicks (Tamer Hassan), who makes it crystalline to our hero that he “owns this town” by repeating the line approximately forty times in their first scene alone.  Not one of these battles, which occupy much of the latter half, resonates as particularly thrilling, the finale being the most blatant example of rushed and mishandled execution.  One wonders if Jones found his characters so engaging that no real time or effort was considered mandatory for the action sequences. 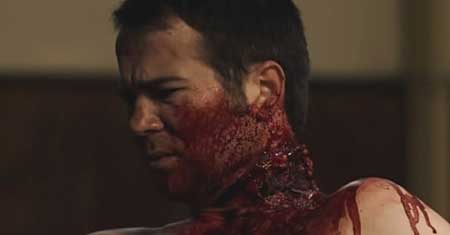 In fact, nearly every stitch of “The Reverend” is fumbled, from the drippy dialogue between Brennan and Booth to the awkward fantasies to even the narration, which serves only to coddle those who hadn’t caught the gist within the first two minutes.  Brennan is a fine actor, and nearly carries the full load when his supporting cast threatens to further sink it.  Booth isn’t strong enough to handle the maudlin lines she’s forced to spew as Tracy, and the usually reliable Hassan employs the “hiss your lines through gritted teeth” technique of villain portrayal.  The worst offender of the bunch is Richie as the coke-inhaling Prince, who is pathetically over-the-top to the point of incoherence.  Not only should he have been kept on a shorter leash, he should’ve been chained up.  Outside.  While someone else inside portrayed the role. 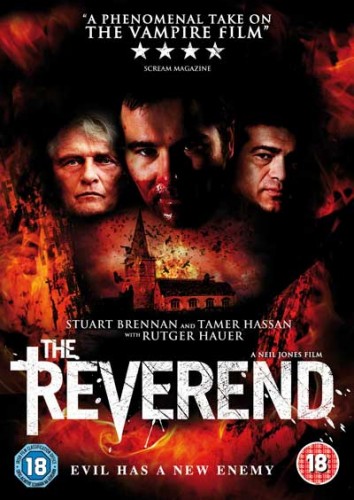 Though his fate once all of the bad guys are dispatched seems foggy, anyone who is familiar with the core Job story (or has read the “Epilogue” paragraph in Wikipedia) will understand what the cryptic voice-over is stating.  That is, until Doug Bradley resurfaces after his exhilarating earlier scene of talking on the phone in his jammies, completely blurring the outcome and leaving the enterprise open for a sequel.  I’m going to be honest, friends.  That would have been much better news coming from Rutger Hauer.