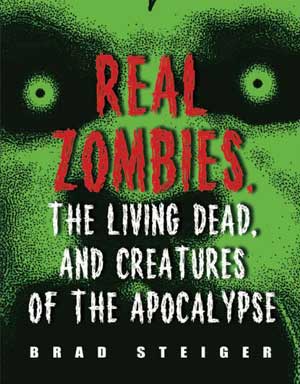 Brad Stieger is a historian and enthusiast. His books have ranged the gamut of all things dark, disturbing and of legend. In his latest release “Real Zombies” he provides a comprehensive overview of exactly that. Done in his easy to read, informed, educated and intriguing style, he has provided the details that otherwise would take a library of reading to summarize. It’s no surprise that zombies and things related to zombies have taken a public interest over the years. Products are released almost monthly between books, films and merchandise. TV shows based around fringe areas and metaphysical have skyrocketed in the rankings. And of course reality shows based on ghost hunting is a franchise in itself.

Though beyond the fiction, most don’t realize that there is alot of data and evidence that supports, inspires and influences the end products. This book takes a look at that with stories, tales and rumors about real zombies and the practices of foreign religions.

Brad’s style is that he entertains us with short sections of interest much like we talk over friendly cups of coffee. Voodoo, black magic, Santeria, Hoodoo…. are just a fraction of misunderstood traditions that are as real to other countries as our belief on Christianity.

The stories within are fascinating in there own right. I got the same sense of a Ripley’s believe it or not collection. Though the intention here was not to create a book of strange ghost stories but more of a collection of the strange. Then you take the campfire stories and process them under the assumption of being real reports given by numerous cases and witnesses. That alone provides a certain unease and creepiness that transcends mere tales of legend and lore. In the chapter about mummies we are told of curses that have had dire consequences to visitors that are mostly unexplained.

Dark stories of unexplained beast and monsters that have shaken local residents to this day are the kind that you find in TV series not in real life. Though Steiger is convincing in his writing that these are all a part of the strange but true. Readers will ultimately enjoy Brad’s style which differs in design and approach than the usual overview of mythological monsters. The focus is on zombies but that includes the dead as a whole so this crosses into ghosts, specters, vampire like entities and various unearthly denizens.

The stories as I call them which are in more in line with witness reports are well written and keep to a minimum. Some range from scary to almost heartwarming at times. Though the outcomes themselves suggest subject matters that deserve more thorough investigation in other subject matter books.

These would be the ones pertaining to afterlife and the spirit in the beyond. I often got this feeling of……ya that’s creepy but it also further cements that idea of an after life. Thoughts of good sousl and evil ones are very much a part of this way of thinking. Other factual articles report on ancient voodoo customs such as Macumba and Santeria. What is great is that in the course of explanation we also get tiny bits of info like when Nicolas Cage purchased a rather famous haunted house to host dinner guests. Curiosity seekers will marvel at details on how to make a zombie potion in great detail. Ever hear of “The pleasant book of dark deeds”? Rumored as extremely powerful, its unlikely that this hidden book will ever find it way on to Internet pages.

Especially since its hidden under lock and key! The book itself ranges in all sorts of variant subject matter that relates to the theme. In a rather shocking chapter, we are told what is assumed to be real reports of the CIA an government experimentation on subjects for the sole purpose of brain, drug induced, sexual and other studies relating to control over common folks and soldiers. In shocking detail we learn of airdrops that released LSD and other drugs over communities to test results.

The truths of this world are continued in different cases that reaffirm the reality of zombie states, creatures and apocalyptic hearsay in this remarkable collection of information. Great stuff indeed, a must read ….simple enough!