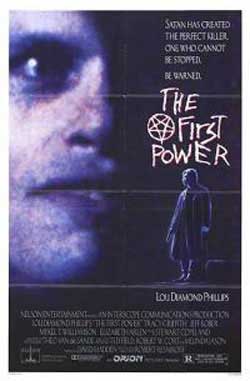 Detective Russell Logan (Lou Diamond Phillips) breathes a sigh of relief when the serial murderer the Pentagram Killer (Jeff Kober) is finally caught and executed. But it turns out the detective’s work is far from finished when he discovers that the killer has transferred his soul into another living body. With the help of a psychic (Tracy Griffith), Logan toils at the nearly impossible task of capturing a murderer with an ever-changing identity

Written and Directed by: Robert Besnikoff

This is my absolute favorite film with Lou Diamond Phillips. It’s dark and brutal at times… and blasphemous at others. All wrapped up in an unholy flick of resurrection, revenge and serial murder. The Serial Killer in this film is awesome and I think he should have received more rolls of the nature. Bill Moseley is hard to spot to some, but he’s in there. I won’t tell you who he is, but…”He ain’t Mcguire.” Tracy looks stunning through the entire film and L.D.P. puts on a killer performance, even though he is a Detective or the “Piggy piggy.” A.K.A. “Buddy Boy.” 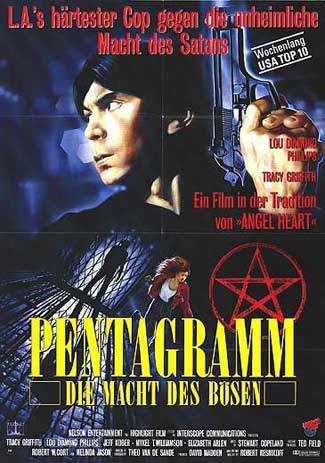 Detective Russell Logan(Lou Diamond Phillips of Young Guns and La Bamba), with the L.A.P.D. Has been responsible for several captures of Serial Killers in the past few years. He has been tracking down Patrick Channing, or “The Pentagram Killer,” for some time now with leads from a mysterious caller that knows when and where he will strike next. This strange informant leads them to a stake out and murder of one of their own before the final capture, made by Detective Logan. This informant made the Detective promise one thing upon his capture… “No death penalty.” Logan failed to listen. A suspect is brought in, believed to be the killer. Someone else was inside of him… Channing, The Pentagram Killer. He now has The First Power, the power of resurrection. He is able to possess anyone that is weak enough to accept his diabolic soul.

The mysterious voice over the phone soon walks into the Police Station. It is Tess Seaton (Tracy Griffith), a beautiful Psychic with hair as red as fire, to help Logan trap down the killer. The Detective is weary at first. Maybe she is his girlfriend, playing a trick on the LAPD. He eventually opens up to her as she did to the killer. This has filled her with the blackness within Channing and determination to stop his Satanic killing spree. Who will he possess next, where will he strike next and who will be his next victim? They seek out help from a local Nun, named Sister Margerite. She gives them knowledge of The First Power(resurrection) and a sacred weapon to stop this killing machine from Hell. 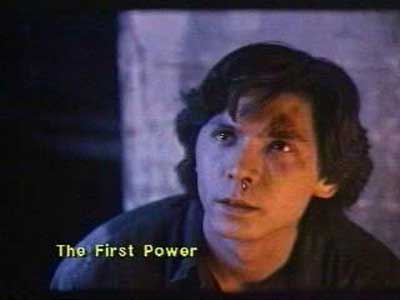 The film sets a dark tone throughout and creative scares (for it’s time) around every corner. The plot and mysteries unfold (as well as Patrick’s childhood) as Detective Logan and Tess check into his background. His old job and his childhood home. His mother tells them to go where he has just returned from… Hell. The acting is awesome. The story is a good one and the classic scares are all present. You even get a lesson of prayer in reverse. Not to mention a possessed Nun and bag lady. 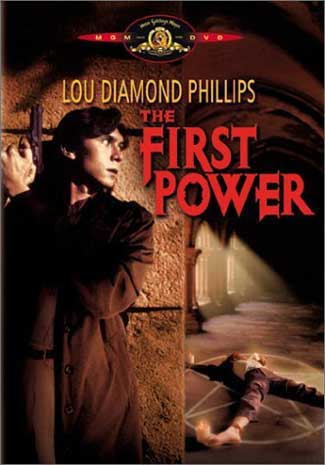 Over all, I give this film, The First Power, FOUR HORNS UP. The evil begins within the opening credits and does not let up the entire time. For fans Satanic Panic Horror and just a good old fashioned Serial Killer flick with a twist, check this one out. I highly recommend it…”Buddy Boy.”