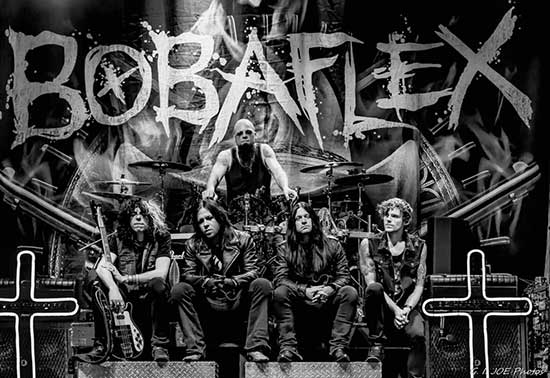 BOBAFLEX released a new single “I’ll Blow Your Dreams Into the Sky” to all major platforms last Friday. Today they released the official music video for it. The band announced a new show date of July 23rd at Newport Music Hall with South of Eden, The Lonely Ones and Lost Past Everest.

Born out of the ashes of record label bankruptcy and the loss of the rights to their name, Bobaflex found themselves lost at sea when they started their own label BFX Records for the release their first independent full album Hell In My Heart in 2011. The album spawned two charting singles and set the mold for Bobaflex’s fiercely independent way of life.

Since Hell In My Heart Bobaflex has begun to solidify themselves as the model for independence. They have released two further independent albums under their BFX label (Charlatan’s Web – 2013 and Anything That Moves – 2015). These two resulted in another 2 charting singles and multiple self produced music videos with one million or more views. Bobaflex released Eloquent Demons (2017), before going on an indefinite touring hiatus. After years of inactivity, Bobaflex released a surprise reunion single, “I’ll Blow Your Dreams into the Sky” (2022) and have have rare select reunion shows scheduled.

To clear up any confusion, The Lonely Ones are members of Bobaflex, minus Shaun and Jake. Both bands are releasing new music, but The Lonely Ones will continue to tour nonstop, while Bobaflex will only play a few select shows a year.

“I’ll Blow Your Dreams Into the Sky” can be streamed/downloaded at: