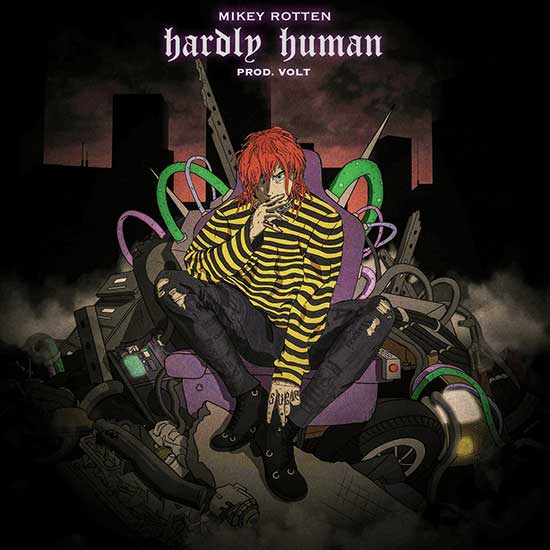 Mikey Rotten is everything your parents warned you about. The ferocious punk rapper is a rogue and a force to be reckoned with like few others, a devil-may-care, non-conforming bad boy with a striking look and a singular vision. But what’s maybe most threatening to the establishment about Mikey Rotten is his never-ending drive to challenge authority. More than just rebelling or raging, Mikey Rotten wants his listeners to question everything about the world around us: the rules we’re ordered to follow, the media pumped into our minds, even what we put in our bodies. His music may not be straightforwardly political or intend to deliver a specific agenda, but he’s always pushing back against the systems and structures that want us to conform, and driving his audience to do the same.

In his own words, Mikey Rotten was “born in the swamp, raised in the gutter, and now living out in West Coast paradise.” Conceived in backwoods Louisiana, he came of age amidst the almost post-apocalyptic desolation of the Midwest, and now makes his name in a city of fallen angels. Growing up, when Mikey wasn’t finding trouble on his own, trouble seemed destined to find him, and he’s got a whole movie’s worth of stories even crazier than Kids. But whenever a barrier was put in the way, Mikey blasted through it like a charging bull. Whenever he was told no or boxed in or counted out, he became single-mindedly determined to prove the doubters and naysayers wrong.

The energy Mikey once devoted to less-than-legal behavior now finds an outlet in his music, which is equally chaotic and cathartic, a soundtrack for stressed-out and struggling people fighting their way out of difficult situations, just like Mikey has had to do. The wild journey he’s taken to where he is now is also part of why Mikey Rotten remains so relentlessly true to himself and critical of the powers that be. When you’ve spent so much of your life being told who you are and what’s expected of you, there comes a point where the only voice you can trust is your own. Mikey’s forceful delivery and raging beats exude an amped-up confidence that he wants to pass along to his listeners.

Mikey Rotten musically cut his teeth in the hardcore scene, and then as producer and DJ, throwing buckwild bass music parties in a place where few people were hip to forward-thinking electronic. He brings that intensity to his work now as a rapper — at times there’s a hint of wonky or even industrial flavor to his production. Mikey first connected with underground legends like Xavier Wulf and Eddy Baker through the Los Angeles scene, but was inspired less by the actual sound of their music and more so the infamously raucous energy of their shows and the hungry devotion of the followings they’ve built. As an obsessive fan of hardcore punk culture, Mikey found a modern equivalent to the anything-goes antics of GG Allin and Black Flag in the boundary-pushing rap of today.

Whether he’s spinning hard-stomping bass music for house parties, laying down cut-throat rap bars, or diving into the mosh pit, Mikey Rotten is drawn to scenes and musical cultures defined by a relentless do-it-yourself attitude, a fighting spirit that he carries into his own work. As an artist and creator, Mikey is not just a single voice, but a total package, who makes beats, directs his videos, and designs album artwork and merch — and if he’s not the person directly tasked with part of the process, you can be sure he’s had a vital guiding hand in it. Mikey does it all not because he’s controlling, but because he has such a defined vision of who he is and where he wants to be, the kind of self-knowledge you can only acquire through a lifetime of questioning. But even more vitally, Mikey’s determination and self-reliance is evidence to his supporters and listeners that, no matter the obstacles in your way, no matter the box you’re placed into, you can fight your way out. Mikey may have once been written off as a rotten seed, but every attempt to cut him down just makes the roots grow stronger.