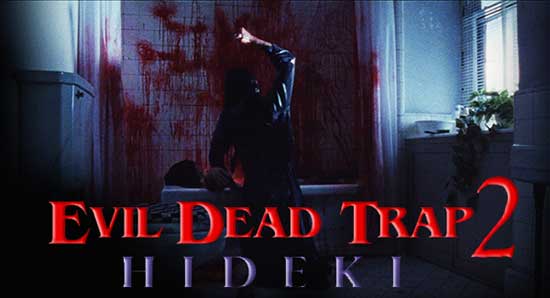 From the Scriptwriter of Akira and Director of Lucky Sky Diamond, Izô Hashimoto, Evil Dead Trap 2: Hideki is coming to blu-ray in 2022 from Unearthed Films!

PLOT:
A killer is on the loose in Japan. Young women are being horribly mutilated. Aki, a young woman who works as a film projectionist, is haunted by a childlike ghost. Her girlfriend Emi is a TV news reporter covering the horrible mutilations. Emi introduces Aki to Kurahashi, a married man with a haunted past. Everyone involved has a dark secret and something evil is taking control of them. They are pawns in a game being played by forces beyond their understanding. This eerie descent into madness takes us on a journey into the abyss and the terrible truth is finally revealed!

“Loaded with gore and stylish visuals, Evil Dead Trap 2 (originally Shiryo no wana 2: Hideki ) is more erratically paced than its companion film and feels a bit closer to arthouse territory. The performers are all good despite the sketchy nature of their characters, and director Hashimoto (the man behind one of the Guinea Pig films, Lucky Sky Diamond) displays a solid sense of how to execute a gore scene for maximum impact.”  – Mondo Digital

“Director Izo Hashimoto offers intensely stylish visuals but largely shuns the rampant Italian horror homages of Toshiharu Ikeda’s original (Dario Argento fans might still recognize an occasional nod, particularly to one of the murders in TENEBRAE). Like many Japanese horror films, this approach extends a great deal of poetry amidst almost unimaginable horror and that arresting contrast helps draw one into the leisurely, dream-like atmosphere. ” – Hong Kong Digital

“This sequel in name only is vastly different and features a very bizarre blend of gory slashings by disturbed female characters, a creepy child-ghost that may or may not be behind all the strange behavior, nightmarish surreal sequences, and sleazy perversions.” – The Worldwide Celluloid Massacre