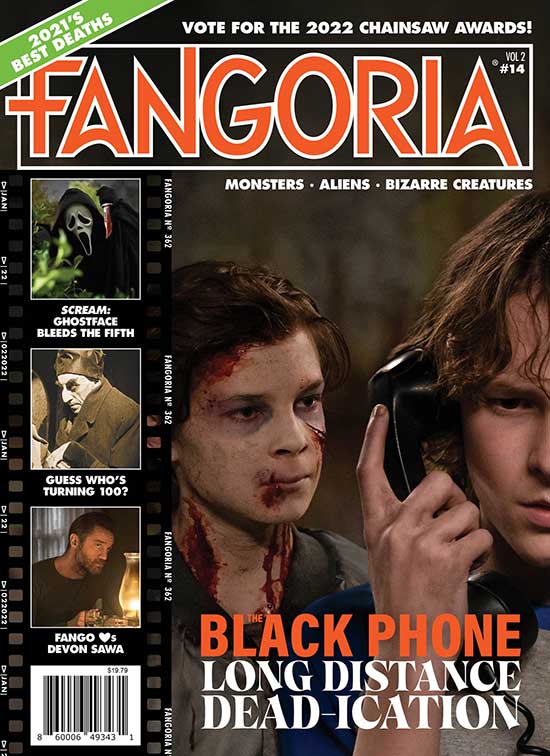 Today, FANGORIA Magazine announced that the newsstand edition of their upcoming January 2022 issue will feature Scott Derrickson’s (SINISTER, DOCTOR STRANGE) THE BLACK PHONE, an adaptation of Joe Hill’s short story of the same name on its cover. With a screenplay penned by C. Robert Cargill (SINISTER, DOCTOR STRANGE), THE BLACK PHONE transports audiences back to the 1970s, as a young boy (Mason Thames) kidnapped by a child killer (played by Ethan Hawke) must decipher the clues he receives from the killer’s previous victims via a series of calls from a mysterious phone on the wall where he’s being held captive.

For FANGORIA Issue #14, the trio of Derrickson, Cargill, and Hill come together to discuss the making of THE BLACK PHONE, the power of nostalgia, and growing up during the unsafe times of the1970s. This latest edition of the long-running horror publication also features a look at the design process behind the instantly iconic mask in THE BLACK PHONE which was designed by FX legend Tom Savini and renowned FX artist Jason Baker.

FANGORIA is also ringing in the new year with a celebration of all things SCREAM, including a conversation between Radio Silence (Tyler Gillett, Matt Bettinelli-Olpin, and Chad Villella, the filmmaking team behind the new SCREAM) and franchise creator Kevin Williamson, who discuss the intimidating challenge of revisiting Woodsboro. And in anticipation of the latest entry in the popular franchise, FANGORIA #14 looks back at the entire history of the SCREAM series, as well as the not-quite-real STAB films.

Other highlights from FANGORIA Magazine’s upcoming Winter 2022 issue include:

FANGORIA #14 will arrive on newsstands in January 2022 and to celebrate the cover reveal, FANGORIA is offering 25 percent off everything in their online shop through the weekend. Use promo code BLACKPHONE25 at checkout.

For fans who want to get their hands on the subscriber-exclusive SCREAM cover, the subscription window to get that cover will close on Saturday, December 18th. For more details on how to become a subscriber, visit FANGORIA at: shop.fangoria.com/collections/subscription/products/fangoria

FANGORIA first launched in 1979 as a magazine celebrating genre filmmaking and continues to be published as a printed quarterly to this day. The mag was acquired in 2020 by producer Tara Ansley and entrepreneur Abhi Goel, who have looked to expand its brand while resurrecting its sister brands Starlog and Gorezone in the digital space.