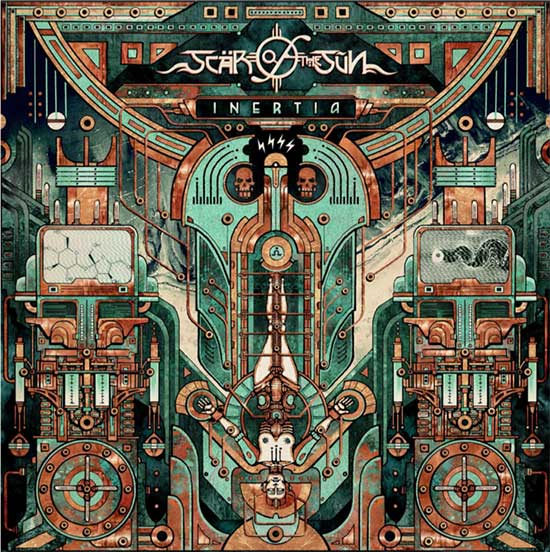 Greek modern metal five-piece SCAR OF THE SUN is poised to reach the next level with the release of their otherworldly third full-length, Inertia, out May 14, 2021 via Napalm Records, and has dropped the exciting second single and official video for the album’s title track today!
After unveiling their hard-hitting first offering, “I Am The Circle”, quite recently, SCAR OF THE SUN is set to deliver their next smashing anthem with its catchy chorus, poised to stick in the listener’s mind forever. Taking off with an instrumental intro, “Inertia” evokes full aggression – raising a voice for everything that is about to come and lyrically dissecting the idea that those who run the world want society to be numb. The song is visually underlined and smartly grasped by an impressive music video, shot and directed by Achilleas Gatsopoulos.
SCAR OF THE SUN and on the video for “Inertia”:

“It’s absolutely breathtaking to watch your emotions and words that you put on paper being materialized and visualized in such a magnificent way! The work of Achilleas Gatsopoulos exceeded our expectations for one more time! Achilleas perceived and depicted the whole Inertia album lyrical concept and he managed to fit it in a four minute masterpiece of a video. We hope everyone will enjoy it as much as we do!”

Achilleas Gatsopoulos adds:
“Picking up from where the album cover left off, the band’s trademark Jugendstil/Dieselpunk/Ancient Minoan design elements were combined with an Expressionist Film approach in order to breathe life into the intricate illustration and manifest the lyrical concepts into visual form.”
Vocalist Terry Nikas on the second single, “Inertia”:
“The opening track of the album is a surprise attack! An amalgam of good old Swedish death metal with modern colors, it’s the aggression you didn’t expect at all!”
Pre-Order SCAR OF THE SUN’s new album Inertia NOW!
After sharing the stage with outstanding acts such as Dark Tranquillity and Insomnium, as well as compatriots Rotting Christ, SCAR OF THE SUN has made a name for themselves with the very special ability to merge modern metal sound with atmospheric soundscapes and dynamic riffs. Their upcoming third studio album, Inertia, delivers a fresh take on melodic, atmospheric, often progressively-influenced metal while forging a unique path, and acts as a follow up to their self-titled demo (2005), debut full-length, A Series Of Unfortunate Concurrencies (2011) and sophomore offering, In Flood (2016).
On Inertia, SCAR OF THE SUN utilizes scientific terminology to transmit their impassioned messages of difficult trials and social awareness lyrically, conveying an overarching theme that reflects one of society’s heaviest burdens – that financial gain has flourished at the expense of humanity and the livelihoods of everyday people.
Terry Nikas about the album:
“Third strike, this album is our punch to the world disarray! The most aggressive album we’ve done so far indicates our current intentions! The main concept of Inertia deals with how financial interests act against the lives of everyday normal people, no matter where you come from, since profit knows no ethics and nationalities.
We become lab rats and we struggle in our everyday life while at the same time that extreme minority that runs the financial interests see people like numbers and value our lives like ants. These are matters that concern and annoy me and I had to get them out of my chest.”
Share