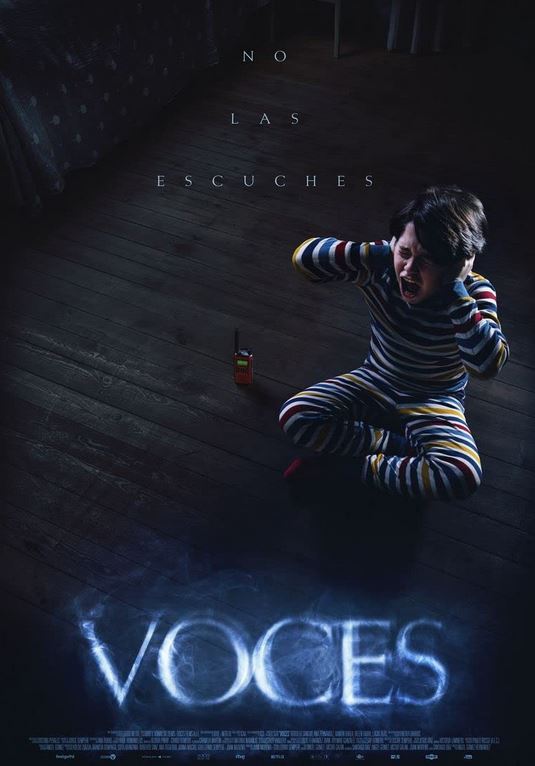 Daniel and Sara have a 9-year-old son, Eric, and they’ve just moved to a new home not knowing the neighbours call it “the house of the voices”. Eric is the first one to notice the odd noises behind each door.

Spain has produced some mixed horror movies over the last few decades. Directors such as Amando de Ossorio and the always reliably loopy Jesús Franco have given us exploitational 60s and 70s delights like Noche Del Terror Ciego and Gritos en la Noche, while in more recent years we’ve had classics like J.A. Bayona’s The Orphanage, Pedro Almodovar’s The Skin I Live In, Alejandro Amenábar’s The Others, Guillermo Del Toro’s The Devil’s Backbone and perhaps most famously the REC series, which inspired the inevitable US remakes.

Although Spanish horror movies have – like those of any nation – varied wildly in quality, the best of them tend to have a certain something, a way of sowing an atmosphere of subtle, creeping dread into their screenplays without resorting to gaudy jump scares, a tactic which often eludes mainstream Hollywood horror directors. One of the latest to try and give us chills is Voces (Don’t Listen), from director Ángel Gómez Hernández and writer Santiago Diaz.

Don’t Listen opens with an eerie, handsomely shot introduction sequence, the overhead camera slowly spinning away from a disused swimming pool in the gardens of a stately old house in the Spanish countryside. Inside the house we meet nine year old Eric (Lucas Blas), undergoing therapy with a female child psychologist, Dr. Carol (Beatriz Arjona). Eric is having trouble sleeping – due in part to the fact that he and his family have recently moved to a new area, disrupting his home and school routines, but also because of the mysterious voices he hears whispering in the darkness of his room at night. Childish fancy one might say, or projection of his anger over being forced to move and leave his friends behind; but soon after leaving the house Dr. Carol is violently killed in a car crash, and Eric’s sketch seems to show the accident in chillingly prophetic detail.

Eric’s parents Daniel (Rodolfo Sancho) and Sara (Belén Fabra) are home restorers, in the habit of buying ramshackle properties, renovating and then flipping them for a profit. It’s clear that Eric and Daniel have a strained relationship, which is partly the reason for the ill-fated Dr. Carol’s attentions. The voices Eric hears begin to manifest themselves ever more strongly, through electronic devices like walkie talkies and telephones.

Worse is to come for the beleaguered family, when Daniel finds poor Eric drowned in the pool in the gardens. Stricken with grief, this leads the initially sceptical Daniel to take a growing interest in EVP (Electronic Voice Phenomenon), whereby spirits can supposedly communicate with the living through technology; especially when he manages to record what he thinks is Eric’s voice attempting to communicate with him. With few places to turn, he ends up seeking the help of famed paranormal expert and author Germán (Ramón Barea) and his daughter Ruth (Ana Fernández). The pair take up residence in the rural house, in the hope of shedding light on the family’s ghostly troubles.

So far this Netflix effort doesn’t sound vastly different from many other haunted house films we’ve seen before – and truth be told it isn’t. There are nods, conscious or otherwise, to numerous movies in the same sub-genre, including The Amityville Horror, The Conjuring, Poltergeist, The Entity, and also the largely forgotten Michael Keaton vehicle White Noise; however Don’t Listen does have a few aces up its sleeve. Among these are the performances, which are excellent across the board – while some characters have more depth than others the small cast really sell them to the viewer.

Special effects are used sparingly but extremely well; there isn’t much CGI on display, apart from early on in the aftermath of the unfortunate psychologist’s car wreck, where we see her injuries in very gory and seamlessly integrated detail. There are a few jump scares but these work pretty well, not feeling tacked on as many do. But most of all Don’t Listen does manage to convey a sense of dread and foreboding, no mean feat considering a lot of time is spent outside in the glorious Spanish sunshine; there are several low-key moments that in a lesser film would fall flat but here manage to send an old-fashioned chill down the spine.

The film also nails a trope which, done badly, is a pet hate of mine – that of a child’s creepy drawing on paper; too often it’s clear that these (admittedly obvious) pieces of foreshadowing have been knocked out by an adult artist trying to emulate the mannerisms of a kid, but here they look genuinely unsettling.

And perhaps best of all is the ending, a gloriously nihilistic sucker punch that some viewers might feel is too bleak but for me worked perfectly, in a way not seen since Frank Darabont’s take on The Mist. So overall Don’t Listen is not going to win any awards for originality, but the tropes here are used so effectively it’s easy to overlook the borrowing from other sources; an atmospheric, low-key and enjoyable experience.