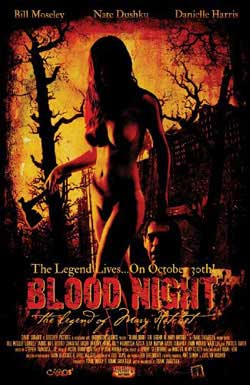 Back in 1978 little Mary went nuts after getting her period for the first time and brutally slaughtered her parents. She was locked away in an insane asylum for years where she was raped and impregnated by one of the orderlies. After giving birth to a still born baby she proceeds to kill pretty much everyone else at the hospital with her until she is taken down in a hail of bullets. Her rampage led to the pseudo holiday called “Blood Night” and in the present time a group of high school students get together to celebrate by drinking, having sex, and just getting in trouble. Everyone is having a great time until someone starts killing them off one by one. Has Mary returned from the grave to claim more victims, or is someone else responsible for the murders?

First off, let me just say that this movie was right up my alley and I was highly impressed with it. It had all the essential elements needed to make a great slasher flick (graphic, over the top violence, nudity, a killer with a cool back story, etc) and I loved everything about it. In short, I was blown away by this movie and when it ended I found myself wanting more. I can see this becoming a favorite with slasher fans and wouldn’t be too surprised if it didn’t spawn a series of sequels (I know for sure that I’d be up for them).

It’s pretty obvious that the people responsible for “Blood Night” were heavily influenced by the 80’s. This movie reminded me of such 80’s slashers as “Slumber Party Massacre,” “Killer Party,” “The Mutilator,” and the lesser known “The Last Slumber Party.” There is a scene that gives a nod to “Return of the Living Dead,” and the outfit that Graveyard Gus (Bill Moseley) wears is very similar to that of Crazy Ralph’s from “Friday the 13th” and “Friday the 13th Part 2.” As a child of the 80’s and a huge fan of horror films from that decade I can say that I dug the 80’s vibe that the film had and thought it was very cool that the filmmakers gave a shout out to some of the movies that came out during that period.

I enjoyed the fact that “Blood Night” didn’t take itself too seriously. Don’t get me wrong, there are definitely some dark, serious scenes to be found here, but there are also some moments of light comedy that work very well. I think that it is very well-written and the bit where the character talks about how a Tom Jones album he finds gives him flashbacks to a traumatizing event he went through when he was younger is priceless, as is Danielle Harris’ story about the horrible things that she experienced when she went to another school. I wouldn’t say that there are parts that are so funny that you’ll be laughing so hard that you’ll piss yourself, but there are a few scenes that will make you chuckle and I think that they are a nice contrast to all the bloody violence that takes place the rest of the time.

While I pretty much loved every character, my favorite would have to be Mary. This chick is seriously demented and has a violent streak that matches any of her male counterparts such as Jason Vorhees or Michael Myers (plus she is a lot hotter than either of those guys and I appreciated the fact that she walked around naked during most of the time she was on screen). She is one hard core woman and trust me when I tell you that you wouldn’t want to met her in a dark alley by yourself one night (especially if it’s her time of the month).

I’m sure that some viewers will complain that the characters are all just stereotypes (and they are, we have the popular kids, the nerds, etc), but this didn’t bother me in the least. I’ve seen a ton of movies that had similar characters so I really didn’t mind that anyone in this movie lacked depth.

I’ll admit that most of them are interchangeable, but who cares? I mean, come on now, most of them are just fodder for the killer! I don’t watch slasher flicks for the character development, I watch them for the insane violence and vomit inducing gore, and this film delivers on both counts. Besides that, when you have a movie that stars genre greats Bill Moseley and Danielle Harris who really cares if the characters are a little cookie cutter?

Did I mention that there is a ton of gore in this movie? If you are into blood and guts like I am you are in for one hell of a treat. We get numerous decapitations, a woman stabbed in the eye with a pair of scissors (who then has a hatchet planted in her face), a head turned around completely backward, various deaths by pick axe (a little tribute to “My Bloody Valentine,” perhaps?), a guy stabbed in the back of the head so hard the blade comes out of his mouth, and my personal favorite, a woman is hit in the lower back with a pick axe and then has her intestines slowly pulled out and wrapped around the blade of said pick axe like a strand of spaghetti on a fork. There is enough of the red stuff to satisfy any gorehound’s taste, and I enjoyed every moment of it.

“Blood Night: The Legend of Mary Hatchet” is without a doubt a winner. I was hooked from beginning to end and would recommend it to anyone who enjoys slasher flicks. Other than just a few flaws (the “twist” that is pretty easy to figure out and the fact that there just may be too many characters) I thought that it kicked all sorts of ass and I am eager to watch it again. If you want to see a great slasher that could never be placed in the same group with the likes of “Scream” or “I Know What You Did Last Summer (as well as the slew of crappy, teeny bopper rip offs they inspired)” do yourself a favor and check out this film. I promise you that you won’t be let down at all. 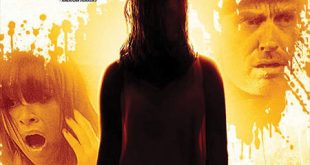