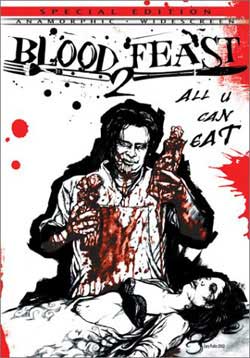 Egyptian caterer busies himself collecting body parts from young maidens in order to bring Ishtar, an ancient goddess of good and evil back to life. When he has prepared enough parts for the ceremony, he hypnotizes a woman giving an engagement party for her daughter, at which he plans to perform the ancient rites of summons, using the daughter as his final sacrifice.

Herschell Gordon Lewis has been titled as the Godfather of Gore on several occasions. You wont be disappointed with Blood Feast if you’re a gore fan. This film was his first attempt to a whole new style and he succeeded in my eyes. Variety reported in 1964 that it was an inept shocker. They also had negative comments on Herschell’s camera and music. My honest opinion would be that the film is lacking a few things. The plot is quite erroneous and the acting is very poor. However, the colors are amazing and the gore was a lot of fun. 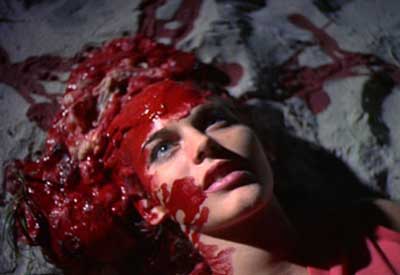 A lot of these scenes are just soaking in red! This is low budget gold. Lewis is the Edward Wood of Gore. People who are not fans often forget this kind of film is not meant to be take seriously. World’s first gore movie? It was filmed in Miami in only nine days and cost just under $25,000 (some sources say $60,000) and earned back millions for its creator and associates. Prints issued at drive-ins in New York carried the advertising title “Egyptian Blood Feast”, though the title card remains the same. This was the oldest film on the UK DPP 74 list of official video nasties.

The murderer is a bat sh*t crazy caterer (with the biggest eye brows in the world) who is accumulating the necessary body parts to prepare an Egyptian feast that was last prepared 5000 years ago for the evil Goddess Ishtar. His ultimate goal is to bring Ishtar back from the dead. Other than this dude having humongous eye brows he had crazy ass eyes and a limp to boot. What a weirdo! 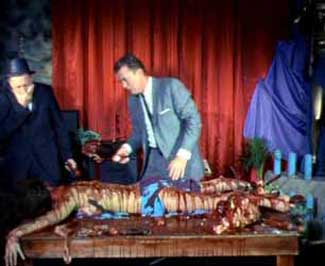 Voluptuous naked lady dies in the bath room. She was wearing perhaps the biggest granny panties ever made. The stabbing isn’t pragmatic by any means. Cutting out her eye, showing after shot, and cutting off part of her leg. You never see the slicing and dicing. The killer plays with organs and there is a lovely shot of a woman’s top of her head cut open only the blood is exaggerated and looks a little like paint. The color of the blood reminds me of Argento. Music is decent for an older horror film. The Killer has the thickest eyebrows I‘ve ever seen. He owns an Exotic Catering establishment where he worships some Goddess statue and completely disembowels young girls bodies. He sets the table to look like a feast, they call it a blood feast. The acting is downright atrocious. Especially the couple at the beach. The man in the blue shirt was dreadful. Quite laughable performances. When he is crying hysterically I desperately wanted to put the film
on mute. MAKE THE BAD MAN STOP! 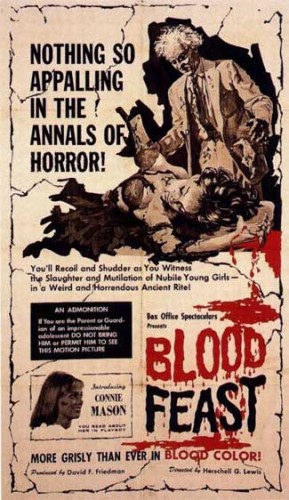 The killer begins to cook the victim’s organs. I believe earlier in the film he mentioned having to cook a dinner for someone? This must be the amazing dinner to come towards the end. In another scene he appears to pull a girl’s tongue out with his fingers which is just impossible right? At least I thought it was. The effects were pretty good but there is no way that was a human tongue. Looked like a cow’s tongue. It had once belonged to a sheep, it was a real tongue. The story behind it is that the production team had to obtain it from a slaughter house in Tampa, which was quite a haul from the production set. While it was resting in a refrigeration unit, the power had gone out and the tongue quickly became rank. However, getting a replacement was not possible due to scheduling restrictions. The solution was attributed to Scott H. Hall; he drenched the tongue in Pinesol which rectified the stench. Pretty gross.

There’s something about a high priestess and a snake and getting stabbed with her organs taken out. You also see a body smashed into a dump truck. It’s brutal for its time which makes me understand why it’s on the nasty list. He puts body parts into an oven then a few seconds later it’s ready. How about that? I guess he likes it medium rare. The killer somehow talks this young lady into laying on a counter top in the kitchen. She never once thinks, “This man is way creepy.” He ALMOSTS chops her head off then her mother comes in screaming resulting in the men in blue chasing the killer. I wont spoil the ending for you but it’s actually quite comical. I enjoyed this ended so much.