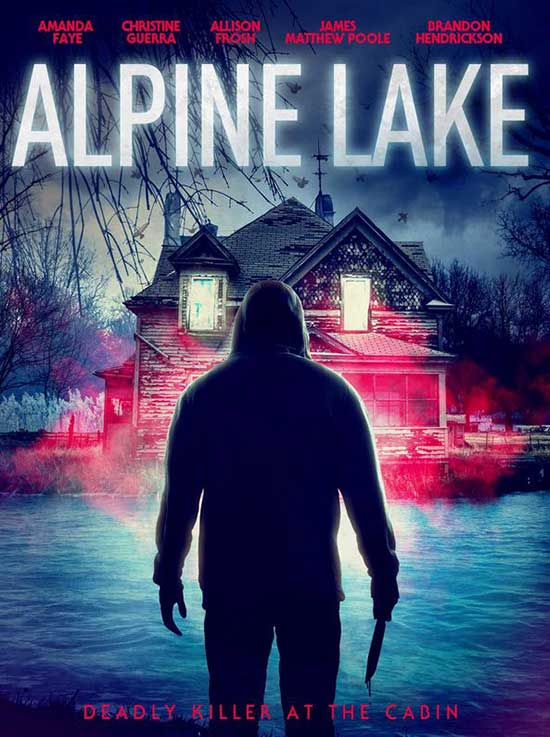 A group of college students head out for a fun weekend at a cabin in the woods only to be targeted by a ruthless killer who plans to chop them all to pieces.

I did a little research on Alpine Lake before I watched it and most of the reviews, I found online made it sound like it was one of the worst movies ever made. I went into it not expecting a whole lot but thought that it was a little better than some of the comments online I ran across made it out to be. It isn’t a great movie by any stretch of the imagination and has its share of problems, but it is at least watchable and wasn’t nearly as bad as I thought that it would be before I checked it out.

The plot is pretty cookie-cutter and isn’t anything original. We have three girls and two guys who go to a cabin in the woods for a weekend and someone shows up and starts killing them off (sounds mighty familiar, huh?). The characters themselves are walking stereotypes as we have the spoiled, asshole rich guy, his not so smart blonde girlfriend, the tough chick (who apparently does MMA but has her ass kicked by the killer in like 3 seconds), the obvious final girl, and the guy who has a crush on the obvious final girl who doesn’t really have any sort of personality. None of them are particularly memorable or likable (especially the rich guy) so I wasn’t too heartbroken when they start getting killed off. The premise isn’t anything you haven’t seen before but that’s OK because it works for the most part and if you are into movies like this then you’ll enjoy the plot for what it is, and you won’t have to think too hard about it.

While the premise is somewhat enjoyable the film itself has a ton of flaws. For one, the acting isn’t great other than Rick Jermain’s performance as the redneck caretaker/red herring. He does a good job with what he has to work with, and I wish he’d gotten a little more screen time. The other actors are just sort of there and don’t really put any effort or emotions into their performances and it really takes you out of the movie in general as a result. Things move along way too slowly before people start getting killed off too, and until the murders start, we are subjected to way too many scenes of the characters sitting around talking about uninteresting things or arguing with each other (nobody really seems to like the rich guy so why do they hang out with him?). Once people start dying, we get a ton of scenes of people leaving the cabin and coming back to the cabin repeatedly as they try to decide what to do and it gets old very quickly. As I said earlier, they make a huge deal about the character Kat being a badass MMA fighter, but she gets her butt kicked by the killer in a manner of seconds without really putting up much of a fight. I was expecting her to kick the hell out of the killer before she died but she doesn’t, so it makes all the talk about her being a tough cookie beforehand seem a little pointless.

Another problem I had with the movie was the fact that the death scenes are lacking. None of them really take place on screen and just involve the killer hacking away at them with a machete. None of the deaths are fun or creative and are exactly the same repeatedly. The killer is quite lame too as the person is just wearing a hoodie and gloves and there isn’t anything about the person that is scary or unique. The killer just shows up with a machete and that’s about it. I think the lack of decent death scenes or an interesting killer really hurts the movie as a whole and is one of the biggest reasons so many viewers out there gave it such a negative review.

I was also a little torn by the identity of the killer. In a way I liked it because I didn’t see it coming and I liked that the person had a bit of a backstory as to why they were doing what they did. On the other hand, there is no way the person behind the murders would be able to do what they did as they are probably the least intimidating killer in the history of film. This person kills off people way bigger than them with little to no effort, and once you see who the killer really is you realize that there is no way they would actually be able to do this as they are short, frail, and appear to weigh about 85 pounds or so (I’m guessing the person decided to wear padding and lifts in their shoes when they are in costume because the killer is way bigger and there is no way it could possibly be the same person by any stretch of the imagination). The revelation isn’t terrible, and I sort of liked it in a way, but they should have gotten a different actor to play the person when we find out their identity just to make it a little more realistic.

Overall, I didn’t think Alpine Lake was terrible and there are worst ways to spend 90 minutes, but I don’t think anyone who sees it will ever argue that it is a horror classic. While it does have some things going for it, I think that the bad outweighs the good and it could have been a lot better than it was. I’ve seen a lot worse lately and don’t think that it was as bad as other people made it out to be, but I won’t be in a hurry to revisit it again anytime soon. Give it a shot if it sounds like something you would be into, but just keep your expectations mighty low.