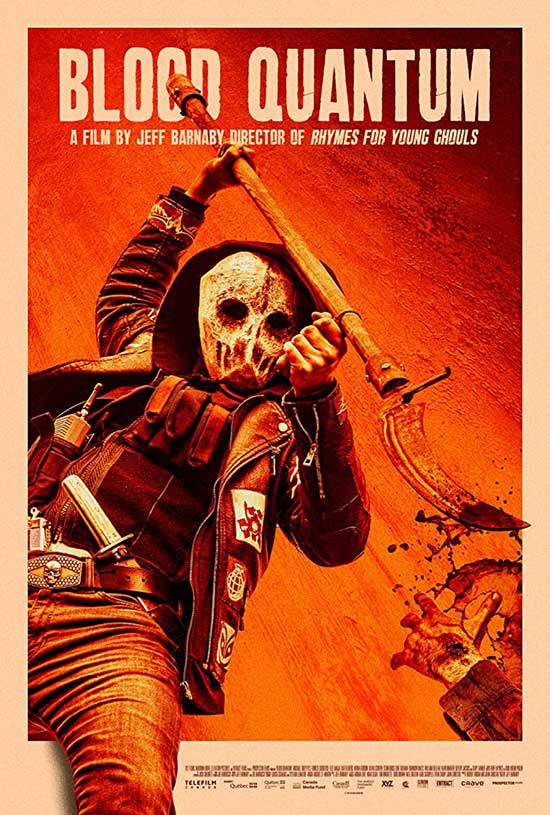 The indigenous people in the isolated reserve of Red Crow are immune to the zombie plague that has taken over the nation, but that doesn’t mean their lives aren’t at risk. It’s up to Traylor (Michael Greyeyes, “Fear the Walking Dead”), the tribal sheriff, to protect the families residing on the reserve and a flood of desperate refugees from the hordes of bloodthirsty, walking white corpses that are closing in.

“The dead are so sick of our shit.”

A SHUDDER original, Blood Quantum was written and directed by Jeff Barnaby The Colony) Blood Quantum takes us on one hell of a ride. The film starts off at The Red Crow Indian Reservation and it’s 1981. Traylor (Michael Greyeyes) and Elle-Maija Tailfeathers portrays Joss.

The world is in chaos and The United States of America is in many forms of chaos. But, the whole world deals with so much. Wars, hunger/famine, fighting, hate, greed. Sometimes it seems someone is trying to throw out signs and maybe they are ignored for too long. Gisigu (Stonehorse Lone Goeman) is cleaning fish and he guts the fish and they start flopping around. Joss (Elle-Maija Tailfeathers) is chopping wood and making tea. 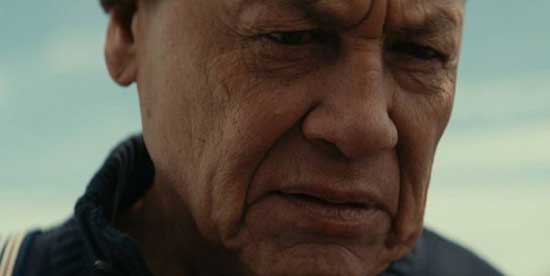 Gisigu (Stonehorse Lone Goeman) shows Traylor (Michael Greyeyes) the fish that he cleaned, gutted, and placed in a cooler. They are still moving. Gisigu must come out of retirement to help his son Traylor. There is a lot of strange stuff happening. We meet Joseph (Forrest Goodluck) and Lysol (Kiowa Gordon) they got in some trouble and were locked up. Joss picks up Joseph from jail. They deal with the first undead person in the jail cell. He is throwing up blood and goes berserk. We meet Charlie (Olivia Scriven) and she is waiting with Joseph so he can get a tetanus shot after being bit. 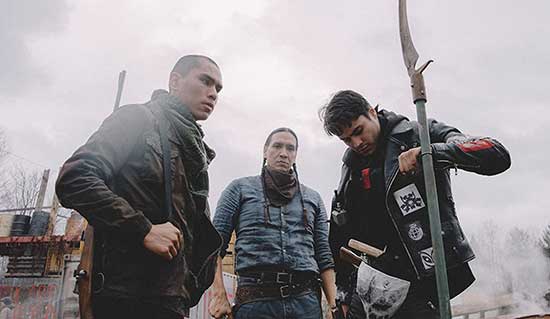 This movie feels like it has such a powerful message. It is not thrown in as something so political but the way it is written, and Jeff Barnaby has genuine, talented, incredible people in this movie. Michael Greyeyes and Ella-Maija Tailfeathers and Forrest Goodluck. It’s a zombie movie, it sticks with the genre and I think George Romero would watch it and smile. The effects in this movie are wild. No one is off limits either, women, babies, everyone. 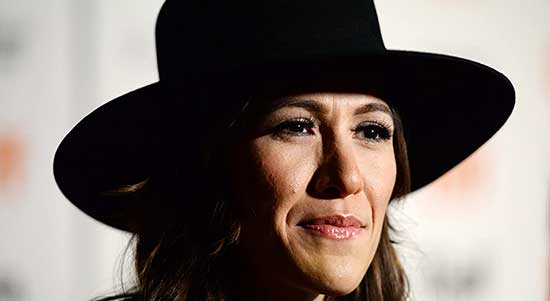 It shows the brutality of what being in a situation like this could be like. There is no sugar coating going on. The kills are bloody, the writing is good. Traylor is some deep sh*t. The man is dealing with chaos. Joseph is in an ambulance; Joss is fighting and must shoot a zombie. She nonchalantly grabs Traylor’s gun. Now, there’s a chainsaw involved. “The dead are coming back to life.”

It’s six months later now. They are dealing with an apocalypse. There are undead everywhere. We meet Doris (Felicia Shulman), she is helping with Lysol and Joseph. The weapons are all different. Guns, swords, giant axes, chainsaws and more. Joss is helping with the medical side of things; she did work in the hospital. Joss is very kind considering the situation she is in. Joss is trying to get Lilith (Natalie Liconti) to share if she was bit or not? Charlie is pregnant too. 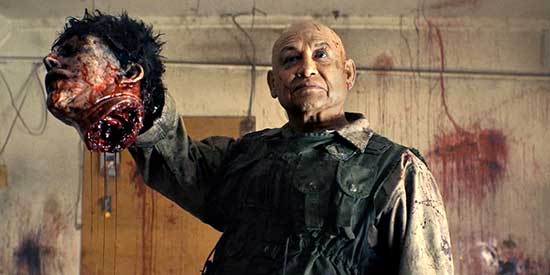 Okay, the shredder scene IS WILD. Bumper (Brandon Oakes) is watching the bridge. The bridge seems to be a blockade. Sylvano Harvey plays a zombie. Traylor is trying to come up with a concrete plan. You can’t eat anything out of the water, the mountain water is clean, and they need gas. Shooker (William Belleau) is watching a different section. Somehow some people are immune, and Charlie is sharing her nightmare with Joseph. No matter how much the world goes to shit, there is always some kind of light in the darkness and a calm in the darkness that helps rectify all the madness.

Joss seems like the only one who didn’t allow this to completely break her. (One thing, I haven’t seen yet in Blood Quantum is target practice, wasting ammo and practicing shooting. Granted, I understand why they do it sometimes but if you are in this situation in a movie. You should save the ammo.) “The earth is an animal, living and breathing.” THAT IS PROFOUND. “This planet we’re on is so sick of our shit.” The wisdom, the no bullsh*t.

Bring on the madness and the song to go along with it. This movie is at a good pace, it’s moving along well. Everyone has an opinion. These zombies are RUNNERS, (well, okay, some of them are powerwalking) this is not a drill. Imagine being eaten alive. GISIGU IS NO JOKE, STONEHORSE LONE GOEMAN, much respect to that man and the music they used, I have goosebumps right now. That scene with Gisigu fighting and fighting, he is a warrior. If you take anything away from this movie, keep fighting the good fight.

Protect the planet, love one another. (I’m not preaching, I felt overwhelmed and this movie is beautifully done.)

Make sure to watch and check out Blood Quantum.