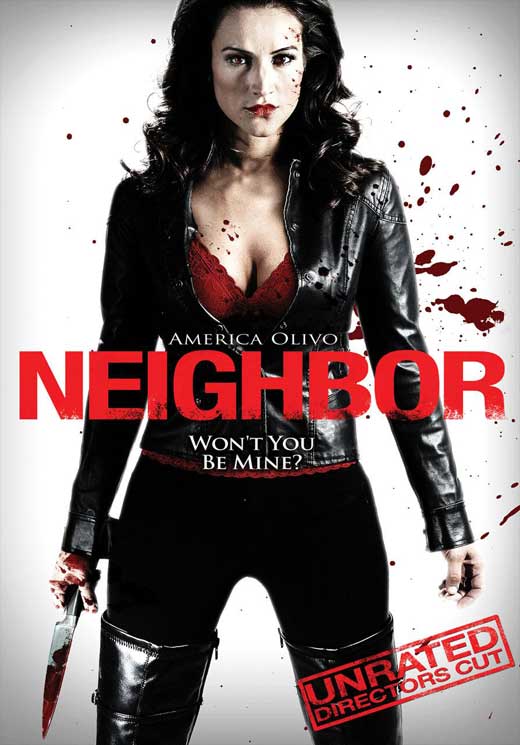 The residents of a sleepy suburban neighborhood have a new neighbor in the form of an attractive, friendly, young woman (America Olivo). Unfortunately she isn’t your typical suburbanite as she is a brutal serial killer who gleefully tortures (and boy, does she torture!) her victims before she kills them. Nice guy Don (Christian Campbell) soon becomes her captive and she subjects him to a variety of unspeakable (and incredibly gory) torment. Will Don survive (and to lift the tagline from the great “Texas Chainsaw Massacre”) and what will be left of him?

Do yourself a huge favor. Run out and get a copy of “Neighbor” as soon as it is available to own. Trust me, you won’t regret it. If I had to describe it in just a few words I would say it was brutal, disturbing, and at times, a little hard to watch (and this is coming from a hardcore gore fiend). I was very impressed by this film and I think that a lot of other viewers will be as well. A word of warning though, if you are at all squeamish you may want to skip this one as there are tons of realistic gore in this movie (and you may not want to watch it while you are eating, either). 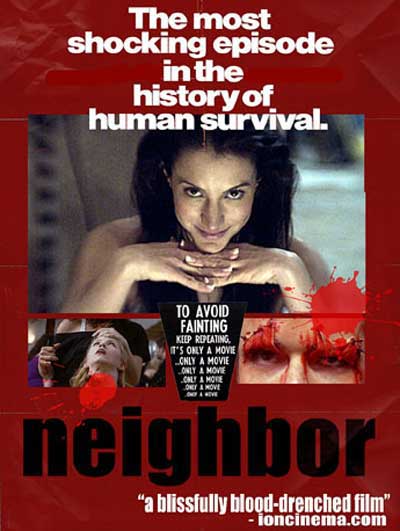 I think that a lot of people may dismiss this as just another torture p*rn flick like “Hostel” but I disagree. I like the “Hostel” films, but I don’t really think that “Neighbor” could be compared to them (or the “Saw” movies either, for that matter). Yes, there is a lot of bloody, hardcore in this movie, but that is the only similar element in my opinion. I think that the characters are a little more developed in “Neighbor” and in general it has more going on than just your usual “Torture scene, someone dies. Torture scene, someone dies” thing over and over again. If anything I would say it had more in common with “Audition” or even the greatly underrated “Cutting Moments” than anything as it just has a depressing tone to it like those films do. My wife made the comment that it was like a Lucky McKee movie (though a lot more violent) and I think that she’s exactly right.

One of the main reasons I enjoyed this flick so much was because the filmmakers didn’t feel the need to tack on some sort of dumb ass Hollywood reason for the girl’s (her name is never revealed) actions. Basically she is just bug sh*t crazy and likes to kill people (after spending a couple of hours torturing them, that is). She is just a violent nutcase and she doesn’t have any kind of back story, which is excellent in my opinion. A lesser filmmaker would have made her the victim of sexual abuse or something similar when she was a child, but writer/director Robert A. Masciantonio doesn’t go in that route, thankfully. I applaud him for having the balls to just give us an utterly insane woman who enjoys killing people who doesn’t have any rhyme or reason for doing so.

Without a doubt America Olivo steals the show as the girl. She is charming and likable at times and then is brutal and creepy as hell at others. She is a person who enjoys her work and I had a blast watching her maim and torture her unfortunate victims. Not since the character of Angela Baker from “Sleepaway Camp” have I seen such a cool and violent female killer. America owns the role and I hope to see more of her in the future. Christian Campbell is also very good as Don and I found myself feeling sorry for him and wanting him to escape the horror he was being forced to experience. Overall I think that the entire cast shines and there is not one character that I had a problem with. 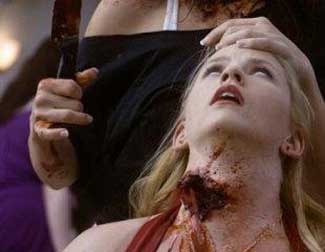 Did I mention that there is quite a bit of blood and gore in this film? We are treated to such wonderful things as a toe being cut off with a drill, a knee cut open (and knee cap removed) by a pizza cutter, someone drinks drain cleaner, a person has acid thrown in his face and is then set on fire, a woman has a hacksaw taken to her face, someone has needles inserted in his eyelids, and most painful of all, a guy suffers the most horrible genital torture that will have every male viewer reeling in pain when they see it. The effects are great and there is no crappy CGI to be found anywhere. The effects are all old school and are done with make up and latex, and as a result they look unnervingly realistic. The special effects person who worked on this movie deserves a pat on the back as he did a kick ass job.

There is nothing negative I can say about “Neighbor.” I was pretty much blown away by it and thought that it was just a fun, violent, gore-filled ride that was very well done. I would recommend it to anyone looking for a great horror flick (plus if you show it to your friends with weak stomachs you can laugh at them when they throw up everywhere). All in all I found it to be a wonderful movie and I think that any true horror fan will enjoy it. Highly recommended.