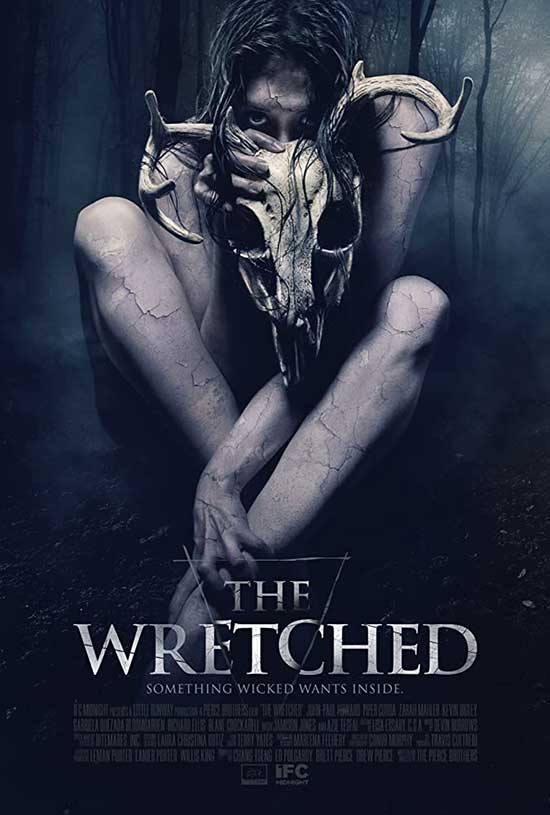 Following his parents’ separation, a rebellious teenage boy, Ben, is sent to live with his father for the summer and work at the local marina in order to gain some form of discipline. The idyllic tourist town offers little solace for him, however, as he is forced to deal with the local, privileged teens and his father’s new girlfriend. Ben’s problems grow increasingly disturbing when he makes a chilling discovery about the family renting the house next door. A malevolent spirit from the woods has taken ahold of the parents and starts playing a sinister game of house, preying upon the children and wiping away any trace of their existence. Ben’s suspicions of the supernatural horrors go unheeded and he launches a perilous crusade in order to put an end to the skin-walking witch’s reign of terror. Chilling and suspenseful, THE WRETCHED offers a modern update to the retro young hero’s mission like that of The Goonies, and promises to make viewers wary of every dark corner they encounter after witnessing its terrifying tale.

The Wretched is different. It starts out with an eerie shot and a good soundtrack. I love the music and how it fits the film. There is a babysitter involved, an evil witch and a dreamy psychological aspect to this movie. We meet Ben (John-Paul Howard), who is on his way to see his father Liam (Jamison Jones). All the small details like the food, Liam cooking, and Connect Four make this movie better. Mallory (Piper Curda) meets Ben (John-Paul Howard) and Mallory is a feisty one. She will keep Ben on his toes. 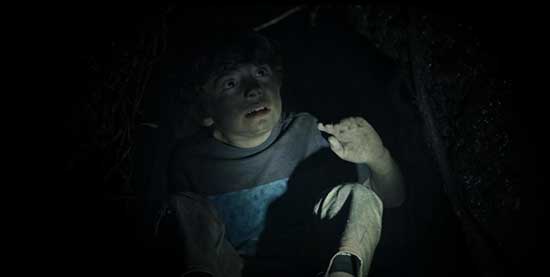 Cut to Abbie (Zarah Mahler) walking in the woods with her son Dylan. Dylan has his polaroid camera and spots the same creepy symbol carved into the trees. He wanders off for a few minutes and hears noises from the trees. The deer scene is unreal, the effects are crazy. It looks like guts just spilling out of the deer, and poor Abbie. The poor deer. Ben apparently has peeping tom syndrome but a screaming baby interrupts the moment.

Okay, back to the deer, now the deer has a creature crawling out of it. The special effects and the slow pace make it creepy. Ben hears something. He goes outside! (Don’t go outside! Don’t do it! He does it!) Something creepy…. This way comes to the porch… or is it a raccoon? For his sake, I hope it is. Ben’s dad has a girlfriend, Sara (Azie Tesfai).

Abbie notices her flowers are dying. In Ben’s life, he is ditching dinner with his dad and Sara to go to a party with Mallory. A bunch of drunk teenagers in the woods! What could possibly go wrong? Liam and Ben’s neighbor, Abbie is having her own problems. The baby monitor is revealing some creepy stuff and the baby is not visible anymore but there are tree branches in the baby’s crib. Okay, somebody needs to call somebody. Ben comes home just in time to see Abbie or whatever creature took on Abbie’s form walk into the woods.

Disturbia just came to mind and creature Abbie is all over the place. Ben has salt out now and is warding and protecting the house. Mallory goes and leaves a witchy note over at Abbie and Ty’s. Ty tries to check out what Mallory was talking about buy Abbie whispered a few sweet nothings to him and that’s that.

The witch gets to quite a few people including Ty, Mallory’s sister. Once she gets to them, they forget about the people. This is definitely a great movie to cuddle up, eat popcorn and watch with the lights out. Everyone is trying to make Ben seem crazy. Abbie isn’t alone. It becomes obvious and I questioned Sara from the beginning. Ben is being taken to the police station after he sees Sara in her creepy form.

Ben pleads with his dad to check the cellar. And the cops are not taking to the station, they are Invasion of the Body Snatcher cops. Now we see what Ben was dreaming about in the beginning of the movie. FINALLY, someone actually checks on something! Liam is checking the cellar. Liam finds the missing neighbors and the altar that Abbie and Sara created.

The Wicker Man meets Supernatural. “She’s making people forget people.” This movie is crazy. We find out who drew on Ben’s cast. Nathan (Judah Abner Paul) is Ben’s brother. Mallory figured out her sister is missing. Ben found the tree that that witches suck people in and inside the tree, it looks like the shot from the beginning of the movie. Mallory is left with the salt circle task and to burn the tree if Ben doesn’t return. The ending is just as creepy as the beginning.

I definitely recommend checking out The Wretched