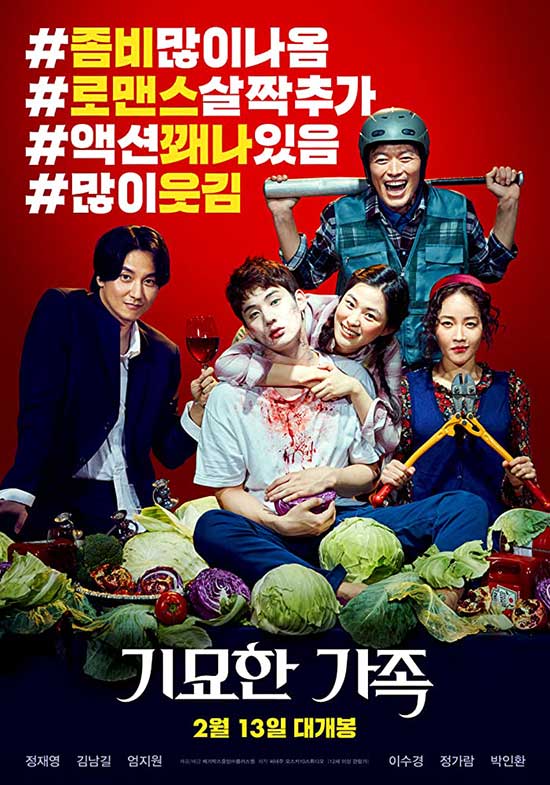 When a pharmaceutical company’s illegal experiments inadvertently create a zombie, the strange Park family finds it and tries to profit from it.

When it comes to horror comedies, zombies have always been popular subject. The Odd Family: Zombie on Sale, a directorial debut for its director Lee Min-jae, follows many of the rules and convention of the genre, but still manages to offer a genuinely funny bit of entertainment.

The story revolves around the Park family whose peaceful country lives are disturbed when a zombie, created by the experiments of a pharmaceutical company, suddenly drops into their lives. After the family patriarch Man-Deok (Park In-hwan) gets bitten and subsequently finds that instead of turning into the living dead, he overnight feels (and looks) about ten years younger, the family sees a golden opportunity to make some serious money. Rounding up every old geezer in the area, they soon have a horde of prospective customers lining up for the miracle treatment. Unfortunately, the rejuvenating powers of this toxic bite do not last for long and in no time at all the whole county is overrun by a brain craving swarm of the walking dead, leaving the Parks to fend for themselves. 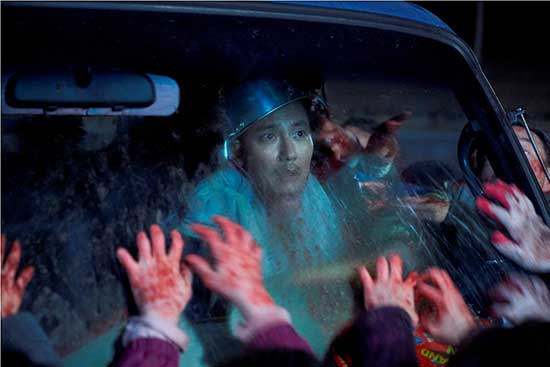 The film takes it’s time setting up the various characters and introducing us to their daily lives and family dynamics. Even when the lone zombie is introduced to the story, it still takes time for any hard-core zombie action to manifest itself, perhaps leaving those hoping for an all guns blazing type of action thrill ride ever so slightly frustrated.

However, if you are hoping more something more along the lines of Shaun of the Dead, you are in for a treat. The Odd family offers a very light-hearted and warming comedy about a dysfunctional family coming together in a crisis. The time taken to set the scene serves the story well as it moves on to the more outrageous stuff, and the relationships between the different characters come into play in various ways. It makes the choices they make in this most unusual of circumstances seem more justified and plausible, instead of rage inducingly stupid, as is so often the case.

While there’s plenty of silly slapstick to go around, it’s not the only comedic tool used and much of the humour rises from the family squabbles and the interplay amidst the various family members, giving the film more depth than just serving up some cheap laughs and a few scares. The well-built characters are indeed the strong suit of the film and the all the cast does a very respectable job in their respective roles. There is genuine chemistry between this family, making the bickering, banter and also, the love, feel very authentic.

The zombies look great, taking their inspiration from old school zombie films and replacing the terrifying fast running monstrosities with classic mindless, tumbling around type creatures. They are nevertheless dangerous creatures and more than a few side characters (and even some main ones) fall victim to them. There isn’t much in the way of gore, but it’s not really the point of the film and as such doesn’t really take anything ways from it. There are a few little niggles, such as the deus ex machina type fix to the family’s desperate situation, but the humorous side of this solution does somewhat make up for it’s the blatant simplicity. Other plot holes, like the vegetarian nature of the family’s “pet” zombie or the fact that he looks nothing like the other mindless corpses might also raise a few eyebrows, but again, these are little things that can easily be forgiven.

As a whole The Odd Family: Zombie on Sale is a very entertaining package. It offers some good laughs and its cheerful atmosphere is a nice deviation in a genre that can otherwise be burdened with overly solemn and depressing stories. It’s great watch for any fan of horror comedies, as well as those looking for something a little lighter in the zombie genre.