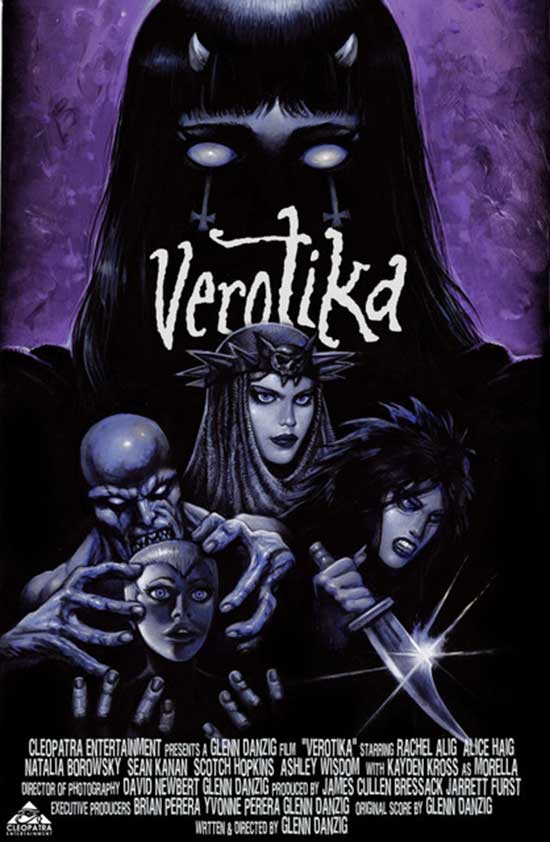 “The worst film ever made” might be considered as somewhat of a compliment for Glenn Danzig’s horror anthology film Veroktika, but it certainly feels like the only way to accurately describe this film to anyone who is interested. Sometimes we have to question the motives behind why someone thought it would be a good reason to ever direct a film, and that was my initial reaction during the first 5 minutes of this atrocious and offensive movie. However, with bad press comes some form of infamy, which is exactly what Verotika has earned itself.

Verotika presents the audience with a series of short horror tales, which are given to the viewer in a Tales from The Crypt type dialogue which comes from a central female demoness character, Morella who is played by porn star Kayden Kross. The segments are hard to put into words purely because they are so incoherent and uninteresting that there’s nothing really of worth to note, but here’s the best attempt possible. A woman with eyeballs for nipples (there is no apparent reason for this) is plagued by dreams of a human-size white spider that murders women. The second segment is not really recognisable as anything, but follows a mysterious woman and seems to be focused mostly in a strip club. The third part of this anthology is about Countess Elizabeth Bathory and follows her obsession with bathing in the blood of virgins.

You might recognise Glenn Danzig as the musician behind Misfits, Samhain and Danzig, but don’t let his musical name fool you into thinking that he might be talented when it comes to film making because that is far from the truth. Verotika is based on Danzig’s own mature comic book series, and claims the name is a combination of ‘violence’ and ‘erotica’, which would explain why the film tries so hard to involve both of these elements within every second. Some people have speculated that Danzig knew this film was going to be absolutely awful, and has actually made one of the best comedy horror films, but that’s far too kind. This film wanted to be something great and misses the mark in every way possible.

The main problem that I faced whilst watching this film was how blatantly misogynistic it is, and how Danzig clearly believes that women are only really good for their breasts. The lines written for them give them absolutely no personality, and no room to even portray someone with an ounce of anything other than having a desirable body. Danzig also clearly thinks that women can only have the profession of prostitutes and strippers. Verotika is so male gaze that at times I genuinely felt uncomfortable watching it. It feels like a 13 year old boy who just discovered boobs has made a film with his friends, and begged all his favourite porn star actresses to star in it… Completely degrading and demeaning.

There is an argument to be made that Veroktika has become a famous film from the fact it is so bad, which in some ways is true – but it should also be recognised for the misogynistic pile of trash that it is. I would never class this as a film that is so bad it’s good, I would class this as a film that I had to laugh at otherwise I would have cried.